Despite my better instincts, I think I would treat life very differently, knowing I was the protagonist in some designed tale. I know this because I play a lot of tabletop role playing games, and in those games, that is exactly how your character exists: as the player in a world made for them.

DIE focuses on this exact psyche. It is a trapped-in-a-game style story, similar to Jumanji or Sword Art Online, but DIE is much more concerned with the psyche of its players than the mechanics of its world. It is an exploration of how we treat fantasy versus reality, especially when the two simultaneously bleed together and rip apart. Writer Kieron Gillen and artist Stephanie Hans put everything in service of this struggle, with a gloomy, unreliable narrator and bleak, haunting color palettes.

The story starts off with our party, a group of five teenages, gathering at their friend Solomon’s house for his birthday. Solomon has prepared a special role playing game for them, something of his own design. Once the group learns the rules and creates characters, Solomon assigns them each a singular, unique die, from a cloth-lined box.

Then, the five friends are magically transported inside of Solomon’s game, becoming their created characters. The game takes place in the world of Die, a frankenstein fantasy hodgepodge that only a teenager could make, with Tolkein-esk elves, dwarves, and orcs next to fully robotic dragons made by a nation called “Eternal Prussia.” To return home, the party must defeat a mysterious and powerful figure known as “The Grandmaster.”

It takes them two years, but the party does just that. Everyone returns home. Everyone except Solomon, who was taken by The Grandmaster at the last possible moment.

Twenty five years later, we start our story in earnest, seeing the physical and mental damage the experience has left on the group. Dominic, who narrates the story, is married, but is perpetually gloomy, especially on his birthday. His sister, Angela, whom he meets at a bar, is going through “an ongoing ugly divorce with a side order of custody battle.” During their reunion, they receive an unmarked package. It reads “Happy birthday” and contains a familiar, cloth-lined wooden box, holding a single, bloody, twenty sided die. After some arguing, the siblings gather their old friends to decide what to do. And that’s when the game takes them once more, and they are all transported back into the world of Die. 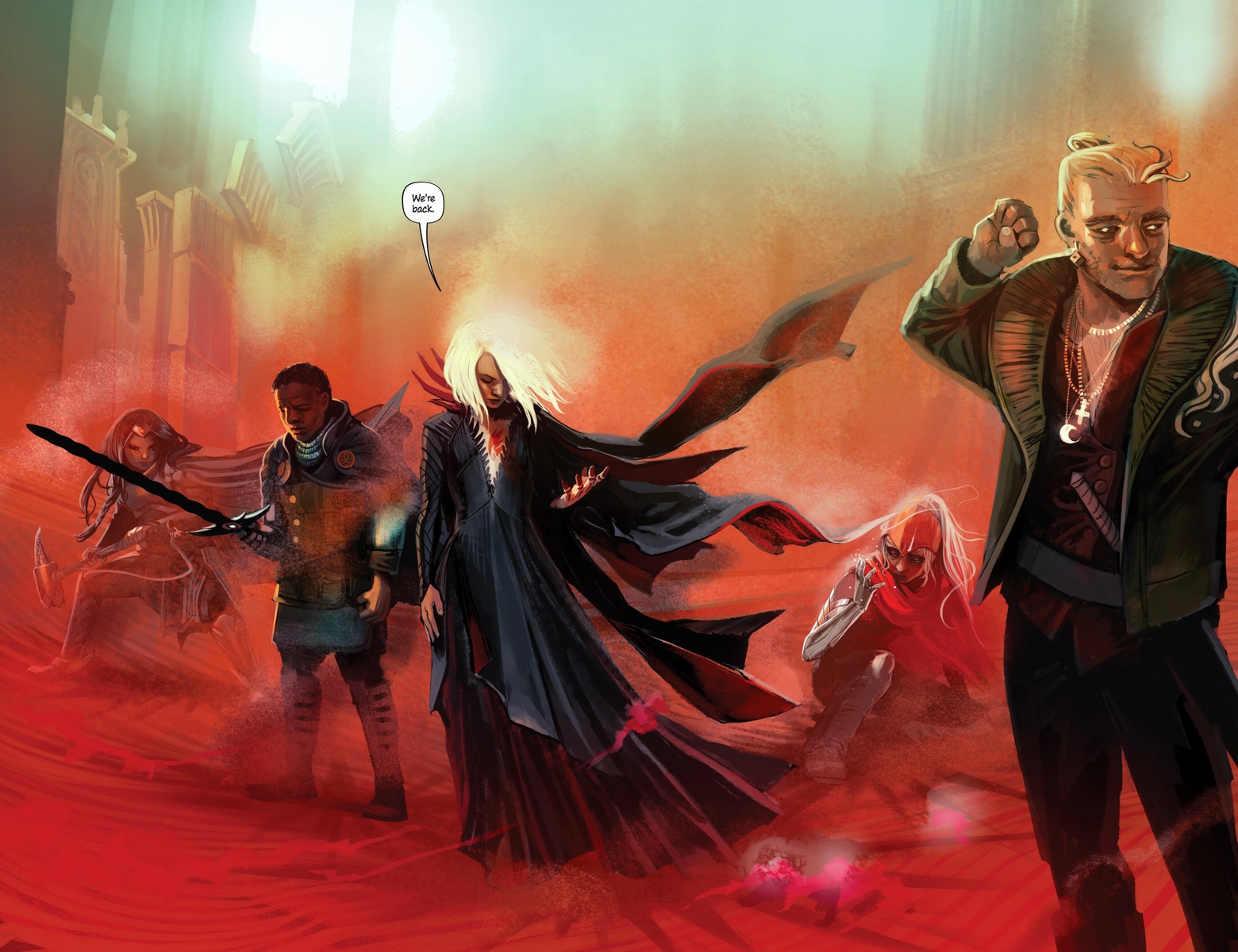 Dominic remains our narrator, but embodies the character Ash, a “Dictator” class character. Gillen, in his own words, describes Dictators as, “like [D&D] Bards, if everyone was fucking petrified of Bards.” Her friends, once again transformed into their characters, have disparately powerful abilities. But, unlike similar trapped-in-a-game stories, the denizens of Die remember the “players” and their exploits. Just as they lived out their lives in the real world, the people of Die lived on, despite the players’ absence.

In a different story, this might be a blessing; the heroes of old returning to the realm, teaming up with old allies to defeat The Grandmaster once again. In Gillen’s story, the past is treated with horror and dread. Early on, Isabelle, the party’s Godbinder (it’s complicated), states,

“We play by the old house rules, right? We have no idea how real Die is. So we have to treat it like it is real.”

And yet, when faced with revisiting past locales or contacting past allies, the party avoids them at all costs. When someone from the past does catch up with Ash, the encounter is horrific, and blatantly shows that, as teenagers, the party did not follow “the old house rules.” Despite their best intentions, it’s strongly suggested that the party treated Die like a teenage power fantasy, using their powers as “the players” to dominate what seemed like a game.

The group is well aware of this, and starts off trying to treat Die like they would the real world. But this conflict, whether to treat Die like the real world or like a game, proves to be the central struggle between the characters. It is impossible for the group to know whether or not Die is real or imaginary. As Ash states plainly herself, the world of Die is “reality and fantasy, hopeless blurred.” 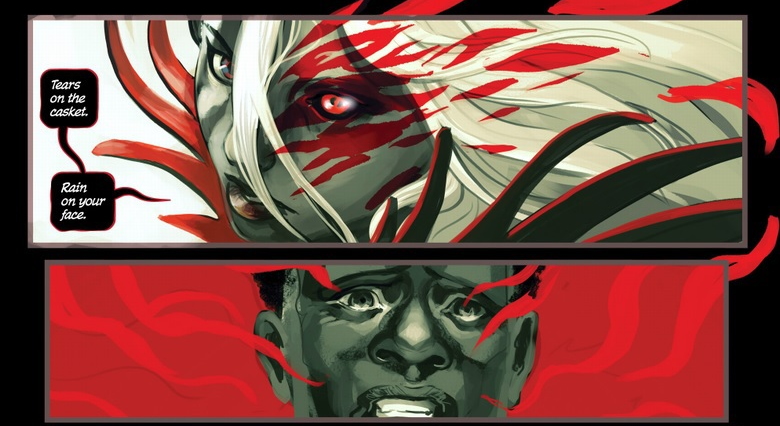 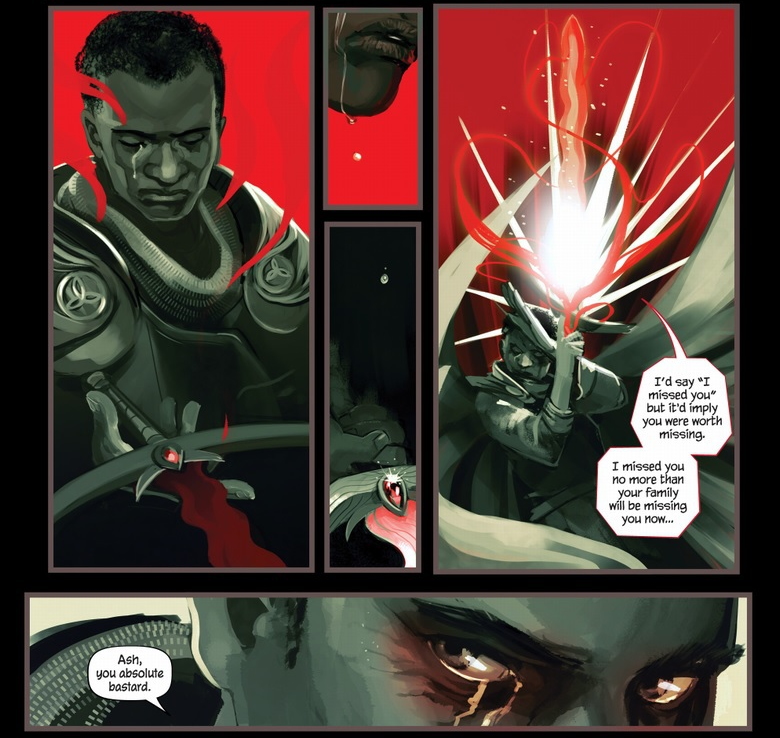 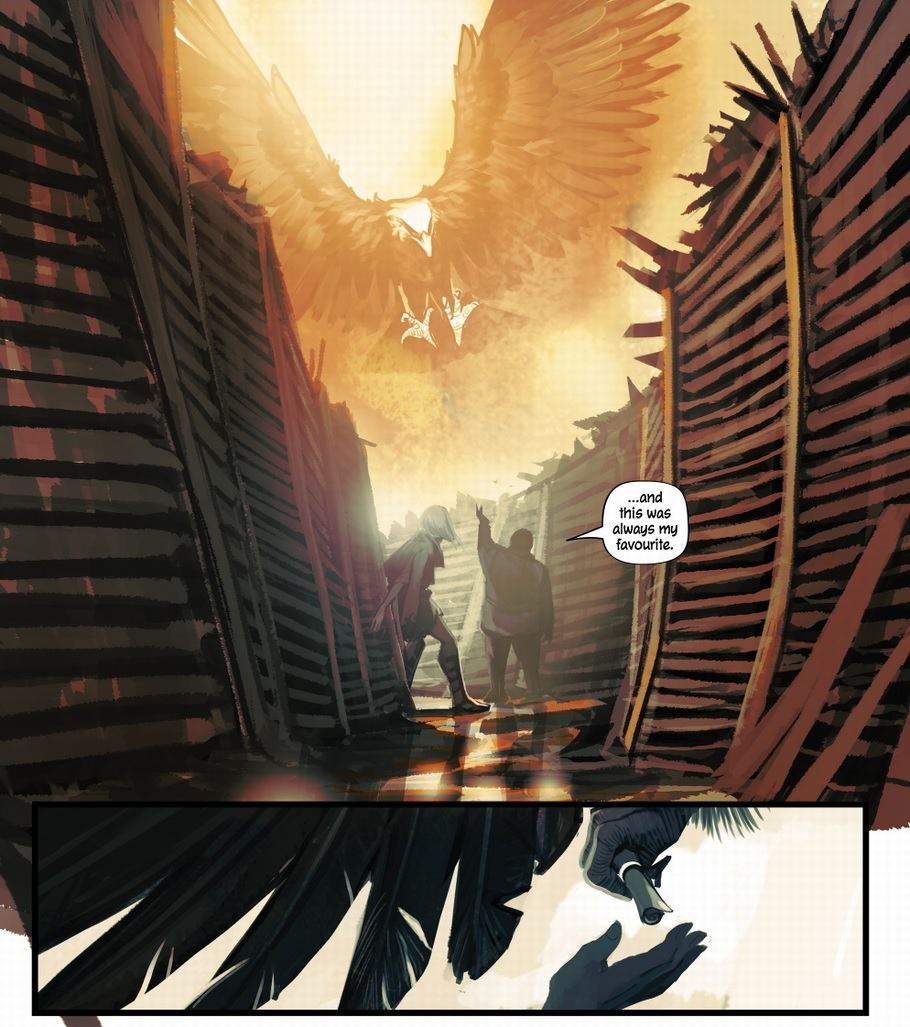 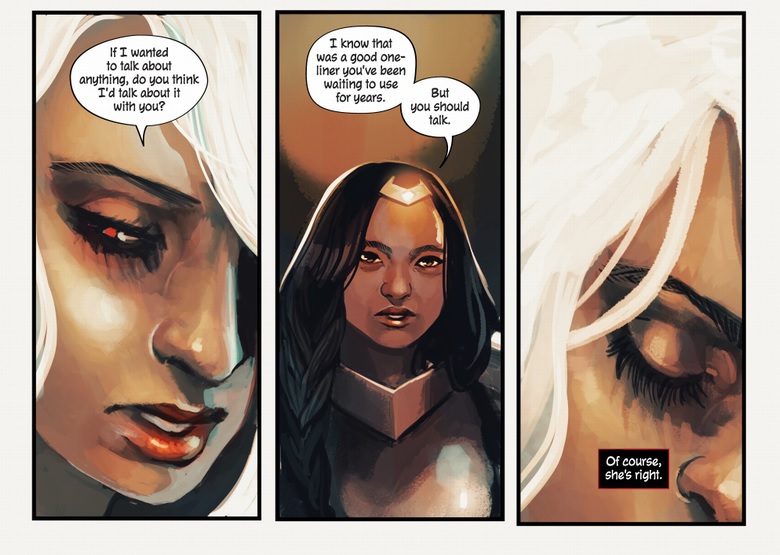 It would be much easier, and much more advantageous, for the group to treat Die like a fantasy, as they presumably did as teens. Later in the volume, it is revealed that, to defeat The Grandmaster, the party should go on a very long, very game-like quest involving traveling across the world and gathering three special keys. The party could accept this quest, likely thwarting evil, saving civilians, and becoming heroes along the way. Or they could get to The Grandmaster immediately, by breaking their house rules to the extreme. After all, If the world of Die is all just a game, why waste years of their real lives treating it like it’s real?

The collected volume ends with the party making tough choices, and learning a horrible truth about the world of Die. DIE, Volume 2, aptly, and ominously, subtitled “Split the Party,” released this month (February 2020). I am curious to see if Gillen will split the story into multiple perspectives, and how he will utilize his gloomy narrator Dominic/Ash. Either way, I’m positive Hans’ art will continue to impress, and remain the immersive fabric that holds the beautiful and overexposed world of DIE together.

The Genius of Beauclair Palace