Parents often take a backseat in coming of age stories. Writers have thought of hundreds of ways to intentionally remove parents from these stories. That way, when our pre-pubescent or teen heroine charges into danger, no one in the audience is thinking, “Where are that kid’s parents?”

From the outside, Middlewest Book One seems to have all the elements of a boy-leaves-home, coming of age, fantasy journey. Our boy, Abel, comes from the “Predictable. Normal. Boring.” town of Farmington, a small place in a sort of fantasy American heartland. He likes hanging out with his friends, biking around town, buying candy and playing videogames. His best friend is his (potentially imaginary) animal companion, a smartass, talking fox. One day, a huge tornado threatens (and subsequently destroys) the town of Farmington. Abel escapes the destruction, but is left with a strange scar on his chest. His home destroyed, Abel must journey through unfamiliar, dangerous territory to find shelter and, hopefully, a new home.

That’s Middlewest on the outside. A bit tropey. Nothing revolutionary. Like Farmington itself. “Predictable. Normal. Boring.”

Thing is, the tornado that destroyed Abel’s home? The one that gave him a strange scar?

The tornado is his Dad. 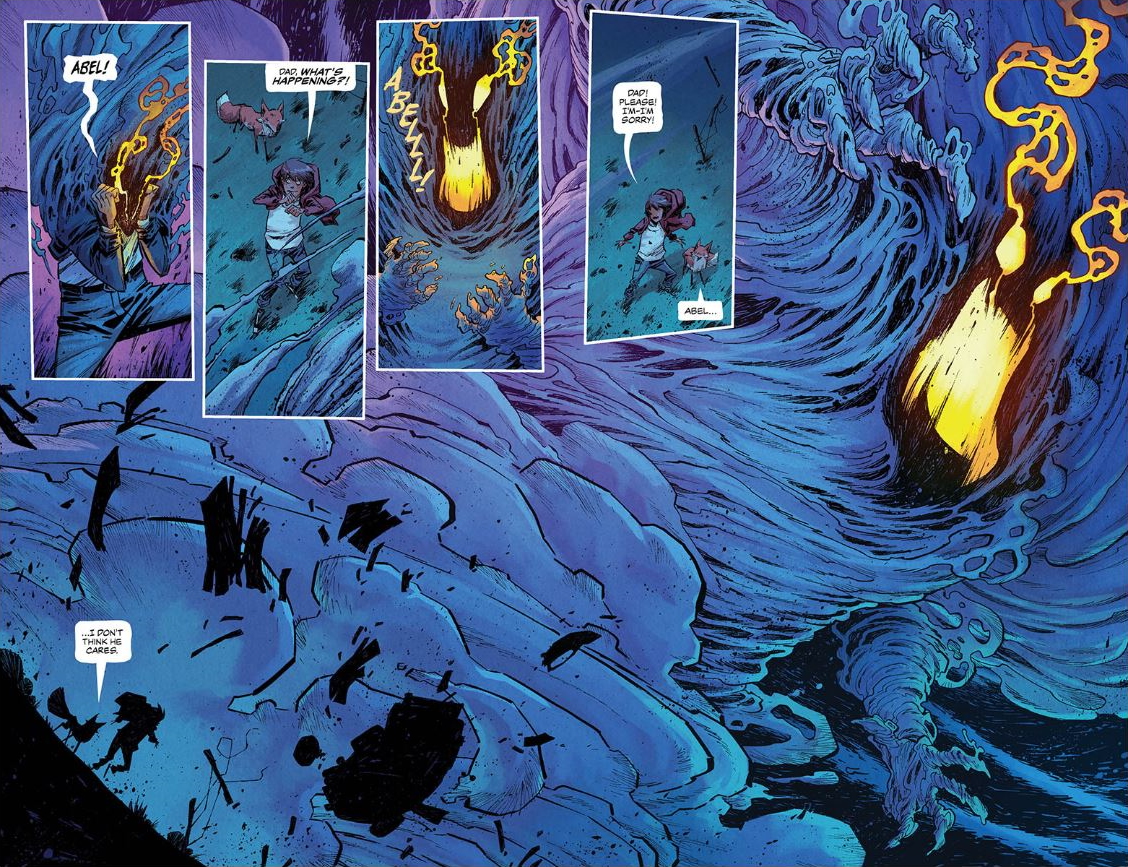 Abel’s single parent, his father Dale, got so angry at his son that he turned into a monstrous tornado, ripped apart the entire town and pierced his son’s heart with a massive, tornado finger. When Dale wakes up, days later, his sets off on his own journey: to find his son.

This, the relationship between father and son, is what makes Middlewest stand out. Abel isn’t whisked away to some fantasyland because of birthright or plot necessity. Abel is on the run from his father, who tried to kill him.

Middlewest does not shy away from this. The first issue showcases Abel and Dale’s relationship, and it’s not pretty. Near the end of issue one, Dale bars his son from coming home, torments him with taunts and vitriol, blames him for his wife leaving them, slaps him across the face and then, as his son tries to apologize to him, turns into the aforementioned tornado monster. Later on, through flashbacks and memory dives, we see more of Dale’s anger issues and the abuse Abel had to grow up with. It’s not graphic, but it is hard to read and makes me want to reach through the page and be the stable parent Abel so badly needs.

As the story continues, it is clear that this abuse colors Abel’s every move. He is extremely independent, sometimes to a fault. He is untrusting, even of the people trying to help him. Most of all, he’s quick to anger, just like his father. 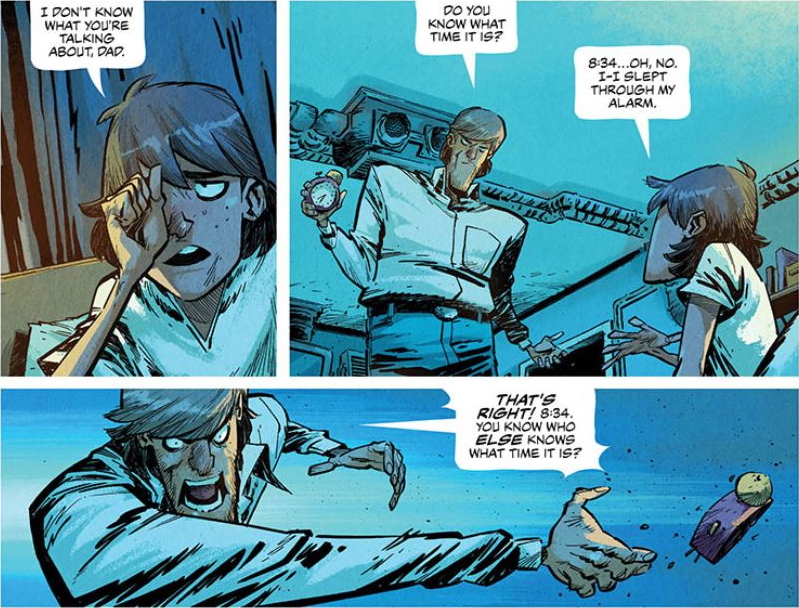 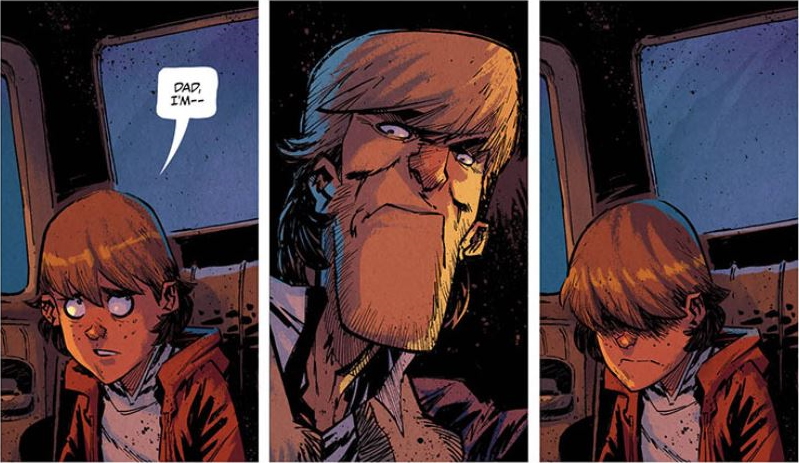 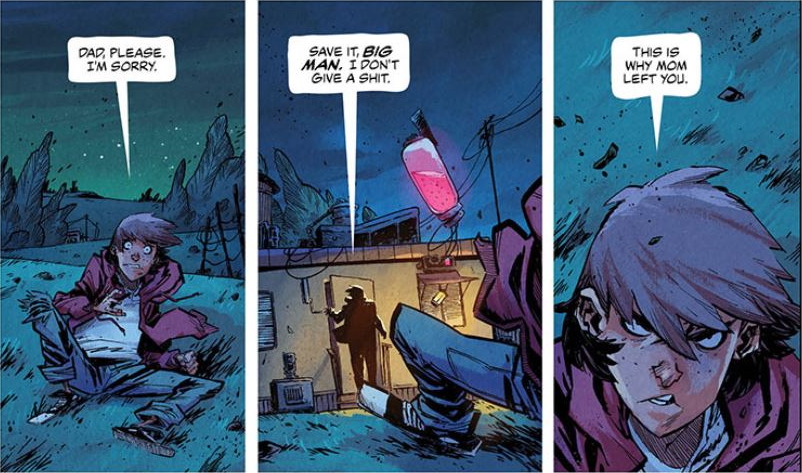 This leads into another key element of Middlewest’s story, and another way it distinguishes itself from its peers: the way it uses its fantasy elements to depict the lasting effects of parental abuse. You see, after Dale turns into a tornado monster and stabs his son, Abel is left with large, strange marks on his chest. We learn later on that, when Abel gets angry, the marks glow and he too turns into a raging tornado monster. As this starts to happen for the first time, Abel quickly panics, crying and terrified as his body turns into violent wind. “I’m going to turn into him…into that monster!” he cries, unable to control the transformation wrought by his anger.

Although the transformation is eventually halted, Abel is shook, apologizing, terrified that he could have hurt someone, but also terrified of the monster. He thought the monster was his father, but now, he can become that very same monster. No matter how much Abel hates his father, no matter how much distance he gets from him, they are still tied together through the scar on his chest. His father tried to kill him, and yet, he is still his father’s son. By the end of the book, the question still remains: will Abel become his abuser?

Book One ends on a cliffhanger, with Abel losing control and the monster seemingly taking over. Book Two released on November 20th, and I’m dying to read it. If the authors keep exploring the father son dynamic in this way, using the fantasy elements in service of Abel’s personal story, then Middlewest has the potential to be an incredible fantasy about overcoming the shadow of parental abuse.