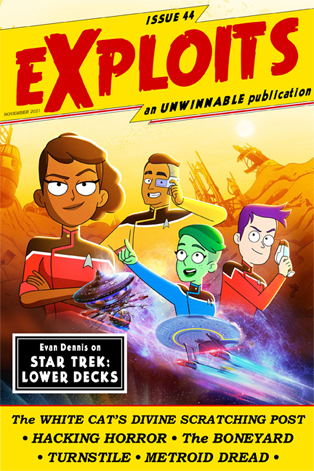 This is a reprint of the Books essay from Issue #44 of Exploits, our collaborative cultural diary in magazine form. If you like what you see, buy it now for $2, or subscribe to never miss an issue (note: Exploits is always free for subscribers of Unwinnable Monthly).

Just like we did in the 90s between Next Generation, Deep Space Nine and Voyager, we’re once again arguing over which of the three currently airing Star Trek shows is the best. Is it Discovery, which despite completely changing its initial premise, does adhere the closest to the original show’s mission to boldly go where no one has gone before? Is it Picard, which follows up on those original 90s shows by seeing where the Federation has gone in the 20 years we were away from it? Or could it even possibly be Lower Decks, the animated comedy that looks like a Seth MacFarlane project? Oddly enough, I’d say the cartoon is the answer to “which Trek is best Trek?” because not only does it have the strongest writing out of the three, but because it’s so unlike anything Trek has done before that the one property it most reminds me of is Galaxy Quest. And that is where I think Lower Deck’s magic truly comes into focus.

Galaxy Quest was a perfect comedy because it had knowledge, respect and love for not just Star Trek as a show, but also for the fans that kept it alive for decades. That’s what made it something that was both hilarious in how it poked fun at a ton of tropes, and sincere by portraying its characters as real people and having a story with actual stakes. Star Trek: Lower Decks never gets quite as heavy as Galaxy Quest, but it still frequently surprises audiences with characters who have fleshed-out personalities and by having conflicts that range from grandiose sci-fi to personal issues that can feel quite familiar to people living in the 21st century as opposed to the 24th. It also references aliens not seen since the 60s and has actors return to voice roles they haven’t touched since the 2000s; this series is clearly made by fans for fans. Lower Decks isn’t as PG as most other Trek or even Galaxy Quest (this show does drop plenty of bleeped F-bombs instead of an obviously out of place “screw that!”), but it’s the freshest the franchise has felt in years, and I’d go so far as to say it’s the best Star Trek series in over 20.