All of us gamers have, at least one time, spent countless hours playing a video game, putting a lot of effort into it by developing characters, completing side quests, hunting for rare items and treasures, or farming gold. But all we ever got were in-game rewards, such as the privilege of using an item or accessing a new level, never owning anything related to the game – all rights were completely bound to developers and publishers. But thanks to blockchain technologies and non-fungible tokens, the hottest trend in the crypto world recently, this is gradually changing, and developers are finally rewarding players for their effort and time spent on video games.

For those still unfamiliar with blockchains and NFTs, here’s a quick explanation: the blockchain was created to serve as public ledgers for cryptocurrencies like Bitcoin, and to solve the double-expenditure problem that these currencies were facing. Essentially, it is a sequence of records, called blocks, that contain cryptographic hashes, timestamps and information from previous blocks, and are virtually impossible to be hacked. Since the creation of the world’s first blockchain in 2008, many others have been created, and today this technology is being used in several industries. From blockchain technologies, came the non-fungible tokens, or NFTs, which are units of data on a blockchain representing an unique digital item – such as a piece of art, a video or an item within a video game – that can be sold or traded in decentralized marketplaces.

Now, thanks to these technologies, developers are being able to create new amazing gaming experiences with innovative gameplays and decentralized environments, and with the use of non-fungible tokens, they can provide new ways of playing video games, in which user-generated content is monetized and gamers can earn money through their effort invested in the game.

One of the most promising games that make use of blockchain technologies and NFTs, and scheduled to be fully released this year, is The Sandbox. Developed and published by Animoca Brands, the game departs from the collectible-like gameplay present in most blockchain games, and focuses on providing a fully decentralized gaming ecosystem where players can design and build virtual worlds, create their own adventures, and monetize all content in the game’s marketplace. 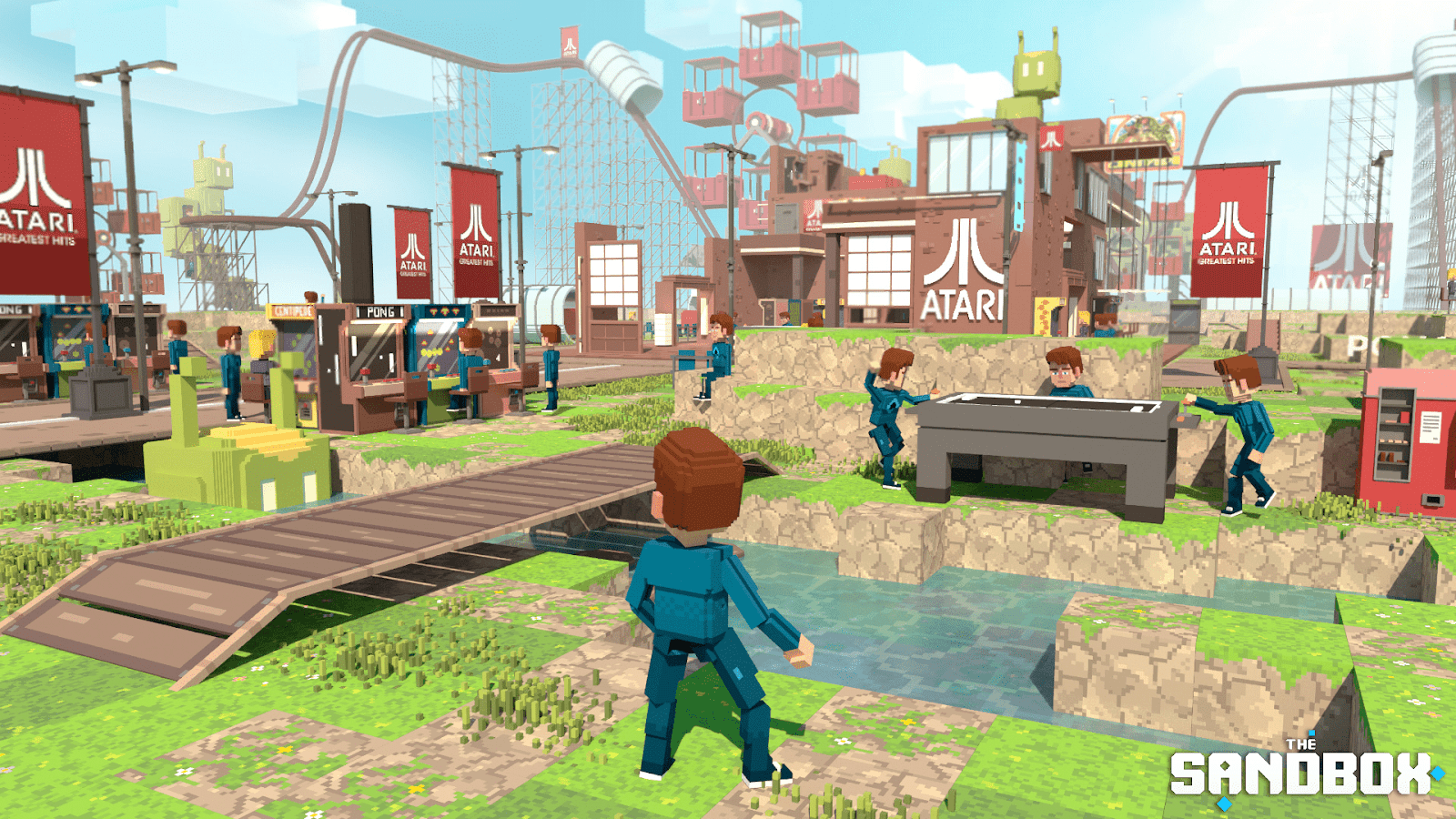 According to developers, their main goal was to bring blockchain gaming into mainstream, by establishing a creative gaming platform, owned and made by players, where gamers can enjoy play-to-earn features with the advantages of true ownership, content monetization, and interoperability (the possibility of transferring assets, funds and credits to other blockchain games and marketplaces).

In the Sandbox, gamers can choose to engage either as creators or players. As a creator, you are able to design interactive worlds, devise gameplay mechanics, and create your own games for other players to join in. All these creations can be placed on LANDs, the game’s virtual building lots, or traded in the Sandbox’s decentralized marketplace. As a player, you can visit and play other players’ worlds and levels, join their adventures, or purchase items and assets to customize your characters.

However, gamers are encouraged to design and build multiple assets, and share their experiences with other players, to create a truly connected gaming community in which everyone can contribute in several innovative ways.

The tools behind The Sandbox

The Sandbox is powered by three integrated tools that, brought together, provide a new gaming experience for user-generated content – VoxEdit, Game Maker and the Marketplace.

VoxEdit is the platform that allows players to create, rig, and animate their own voxel-based assets, such as avatars, NPCs, scenery objects and even items and equipment. It is a 3D modelling package that consists of a modeler, an animator and a NFT maker.

The most important tool in The Sandbox is Game Maker. With it, gamers can export these creations into the game, place them on LANDs, and apply gameplay mechanics and gaming functionality to create interactive adventures.

Finally, all these assets can be sold, bought, or traded in the Marketplace as non-fungible tokens, with creative rights bound to their creators.

From accessing other players’ worlds and levels and playing their adventures, to trading and purchasing LANDs and assets in the Marketplace, everything in the Sandbox is dealt using a cryptocurrency called SAND, an utility token based on the Ethereum blockchain that serves as the game’s dedicated currency. Apart from that, SAND can also be used as an investment as well, as the Sandbox features a stock market with a realistic revenue system.

Since the game has its own revolving metaverse, SAND is also used as a governance token, and holders can exercise voting rights on key decisions regarding the game’s future, and participate in its management through a Decentralized Autonomous Organization, giving players total control over every aspect of the game.