Hello and welcome back to World Tour. This month on our ambiguously defined globe-trotting vehicle we are headed to South Africa! Before we get to the meat of the column I wanna recommend you go watch some work from Lerato Lee Mokobe, who is a really cool South African spoken word poet!

“The first act of violence that patriarchy demands of males is not violence toward women. Instead patriarchy demands of all males that they engage in acts of psychic self-mutilation, that they kill off the emotional parts of themselves. If an individual is not successful in emotionally crippling himself, he can count on patriarchal men to enact rituals of power that will assault his self-esteem.” – bell hooks

Inxeba follows Xolani (Nakhane Touré), a Xhosa factory worker who (among others) goes to the mountains and helps initiate teenage boys into manhood with a ritual circumcision followed by a period of time remaining in those mountains among other initiates. Xolani is assigned to Kwanda (Niza Jay), who he soon realizes is queer. As Xolani continues to look after Kwanda, he desperately tries to keep his own queerness secret but things begin to unravel.

At every moment in Inxeba there is a strange forced intimacy. You see this with the two of them in this dim and claustrophobic tent together talking with the camera pulled tightly on their faces. Xolani puts treatment on Kwanda’s wound and the camera holds on Jay and Touré’s faces as the former feels the sting. This forced physical closeness is starkly juxtaposed against an emotional distance that feels jarring. It’s like you’re watching two knights in heavy armor try to walk down a narrow corridor together. There are little moments of openness that come though. The most striking is when Xolani talks about his own initiation. It is horrifying, violent and desperately lonely. Soon after they close off again though, and it’s back to the lonely togetherness.

This is even more glaring when we get to the actual sex which occurs between Xolani and Vija (Bongile Mantsai), a long-time friend of Xolani’s who helps run the intitiations. Vija is a boisterous alcoholic with a wife and children at home. Mantsai’s performance really shows the abject misery hidden beneath the hypermasculine and violent exterior. When the two of them have sex it doesn’t feel erotic, romantic or even fun. It just feels functional. It’s like turning on your car in winter to stop ice from forming on the windscreen. If there was a mutual understanding there it would be fine, but what makes it more miserable is that Xolani is desperate for there to be something more. He reaches for an intimacy which isn’t there over and over again. He is desperately clinging onto something which doesn’t exist, if it ever did, but he can’t admit that to himself. 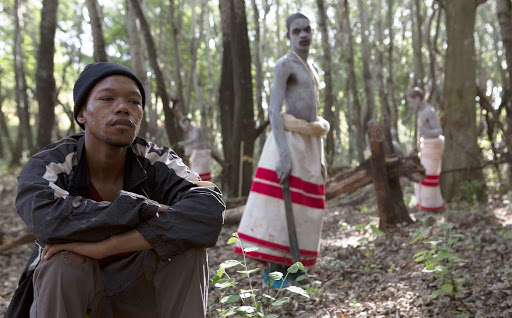 The ritual is just a flesh wound. With herbs and time, it heals, the worst thing that you’ll get is some scarring. The real wound comes with the demands of adult manhood. There’s no room for vulnerability or humanity. Instead, there’s machismo and bravado. One thing that’s important to note here is that these intensely patriarchal attitudes aren’t inherent to South Africa, or the continent of African in general. While some cultures were patriarchal before European colonization, many of them had far more complicated, interesting and equitable understandings of gender. Imperialists deliberately erased and marginalized those cultures to assert strict Western notions of gender and establish a clear hierarchy.

In the recent few decades, through homo/femonationalism, these same imperialist countries now condemn these attitudes which they helped to foster. This is something which can be seen in the intensely orientalist narratives around queer Palestinians, whose marginalization is used to justify settler-colonial aggression. All this has done is entrench violence against queer people in these countries, because it is then associated with Western colonial aggression. This means that people like Xolani, Kwande and Vija are even further endangered because their queerness/gender deviance is seen as an imperial imposition.

It’s tragic that so many men live like this, but the ending of the film re-asserts that the real danger that comes here is what this wound will lead them to do to the people in their proximity. Since they cannot heal out of a fear of ostracization, they must continually mutilate themselves and others. Their targets are pretty much always people who are lower in the social ladder. More feminine queer men, women, trans people (especially transfemmes) – the real danger of the wound is that it consumes everyone else before a single punch is even thrown in the direction of the system which created it.

When the final cruel and violent decision happens in the film it isn’t out of some abstract toxic masculinity. It’s not like if Xolani just listened to a mindfulness podcast, tapped into his feminine side and put on some nail polish he would be fine. His actions are a response to decades of trauma with the constant threat of actual violence hanging over his neck – especially as a queer man. You can see this in the way that the film was received in South Africa, with the cast and crew receiving death threats and screenings of the film being mobbed by homophobic protestors.

In those final moments, an opportunity for something different opens and he rejects it with violence. The wound continues to fester and he feeds it with blood. Hungry and oozing it runs

From the Man Who Sold the World