This feature is a reprint from Unwinnable Monthly #139. If you like what you see, grab the magazine for less than ten dollars, or subscribe and get all future magazines for half price. 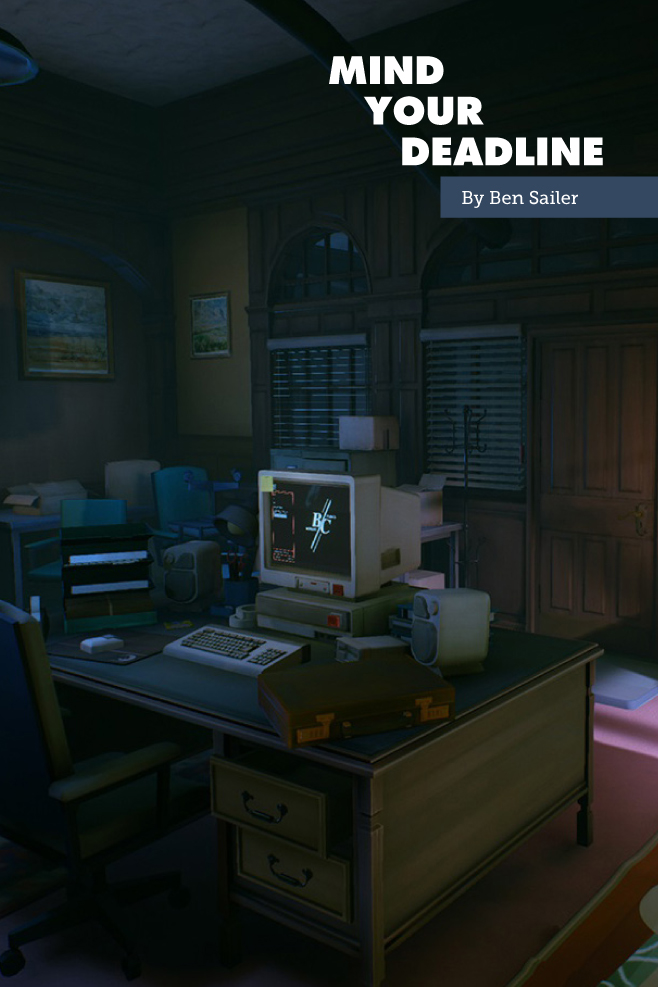 Few professions have more impact on society than investigative reporting. It supports the functioning of democracy, girds against authoritarianism and ensures an informed citizenry can keep powerful people in check. The stakes for this work are high; what journalists uncover can change policy, spark movements and alter the course of history. For those operating in oppressive areas, the work can be dangerous, too. According to the Committee to Protect Journalists, reporter arrests hit record levels in 2020.

A righteous mission. An edge of danger. A David and Goliath dynamic. The elements of a compelling character archetype are there for fictional storytellers to work with.

Yet videogames centered around investigative reporters are relatively scarce. While intrepid wordsmiths may not be unheard of in interactive entertainment (Read Only Memories: 2064 and the Headliner series of games are among a handful recent examples), they’re not exactly a trope like, say, space marines or robed adventurers. The pen may be mightier than the sword, as the old cliché goes, but it’s also more difficult to build game mechanics around than conventional weaponry.

The Occupation (2019) from Manchester-based White Paper Games, the studio’s second title following their 2014 debut Ether One, stands out for its understated reporter-as-hero plotline. It’s a first-person narrative adventure that bridges the distance between dialogue-driven adventure and walking sims such as Firewatch, centering its protagonist as a daring truth-seeker facing a conspiracy much greater than himself.

“The Occupation, to me, is an exploration of taking aspects that make the walking sim genre such an immersive and explorative spaces from techniques we developed on Ether One and meshing them with the immersive sim genre taking games such as Thief, Dishonored and Deus Ex as inspiration.”

Set in northern England during the late 1980s, a terrorist bombing leaves 23 people dead, throwing the country into turmoil. In response, the British government drafts a controversial piece of legislation called the Union Act, seeking to curtail civil liberties in the name of public protection. There are sinister intentions afoot, and if the truth isn’t brought to light, the nation may slide toward a dark political future.

“Especially now that people are playing a wider selection of games but with fewer hours invested into each, I think knowing how long a game will last and knowing you can impact the outcome without checkpoints and restarts is an interesting concept for players,” Bottomley says. “Experiencing the feeling that you have impacted the larger game world in some way is a big factor we hope players will engage with and take away.”

With the fate of a nation resting on his shoulders, a reporter named Harvey Miller must uncover the real story before it’s too late, through any (non-violent) means necessary. What follows is a tense adventure that takes players through the nooks and crannies of a government building to piece together the truth by gathering evidence and conducting interviews, with branching plot paths where every choice has consequences, building tension with stealth sequences and deadline-driven design.

While The Occupation’s story and characters are fictional, its plot beats mirror the political history of its setting. The echoes of nationalism and austerity under a hardline right-wing administration establish the context for an economically depressed empire in decline, creating conditions conducive to country-first policies and the scapegoating of minorities for the violence. Some things never change, it would seem.

“Britain in the 1980s was a prime setting for this with Thatcherism, but a lot of current day themes started to arise alongside us developing The Occupation which is a clear example of how history repeats in cycles,” Bottomley says.

There are parallels between the story and events that happened during The Occupation’s development cycle too. Beyond drawing inspiration from the time period in which the story is set, Bottomley took an interest in exiled whistleblower Edward Snowden’s work, particularly his 2014 TED Talk on Internet freedom.

Then terror then struck close to home when the Manchester Arena bombing in May of 2017 killed 22 people just two miles away from the White Paper Games office. The following month, a vehicle ramming and stabbing spree on the London Bridge killed eight bystanders and injured 48 more. Coincidentally, on the same day the first trailer for The Occupation was scheduled for release.

For Bottomley and the team, the connections between what was happening in the headlines and the story they wanted to tell were impossible to ignore. However, the company was careful to avoid leveraging tragedy to promote The Occupation. While the game deals directly with weighty subject matter (and doesn’t pull punches to avoid controversy either), it remains a work of fictional entertainment. Keeping an appropriate balance between being honest without being exploitative was a challenge.

“It’s incredibly tough to deal with topics like that because on the one part they’re meaningful to you and make you sad and angry,” Bottomley says. “But you also can’t make that the focus of the game because when you need to promote your game, it ultimately is an entertainment platform and you risk sensationalizing these meaningful themes.

The company could have attempted to avoid controversy by claiming the game was free from political themes (a rhetorical trick some studios have tried to much critical derision). They took a different route instead, applying an objective approach to storytelling that invites players to find the truth for themselves, but without preaching an agenda. While one can choose to pursue or ignore different leads, the facts of the story remain the same, and the player’s only obligation is to put the puzzle together.

From the outset, The Occupation wastes little time putting players in the thick of the drama. It opens with Miller standing on the balcony of a government building, lit cigarette in hand, searching for an open window. It’s a fitting introduction to a search for evidence and information that could change the course of history.

Your sources won’t necessarily provide that intel easily, though. As the game continues, players must secure interviews with people of interest, navigating evasive answers and willful deception from interviewees while pursuing the right leads to piece together the story. Thanks to cleverly crafted AI, non-player characters may act and respond differently within the world depending on player actions, making the world feel alive.

There’s a high level of interactivity here as well, encouraging players to leave no stone unturned while rifling through file cabinets and hacking into computers. If something looks like it can be pressed or picked up, then it probably can.

“I value tactical interaction,” Bottomly says. “Anything that looks functional, should be functional which helps bring our worlds to life. I engage more with top-down design than bottom-up, which means I tend to think of world, theme and high-level beats to pace out the game, rather than what a specific core mechanic might be. All our mechanics tend to be designed with narrative in mind.” 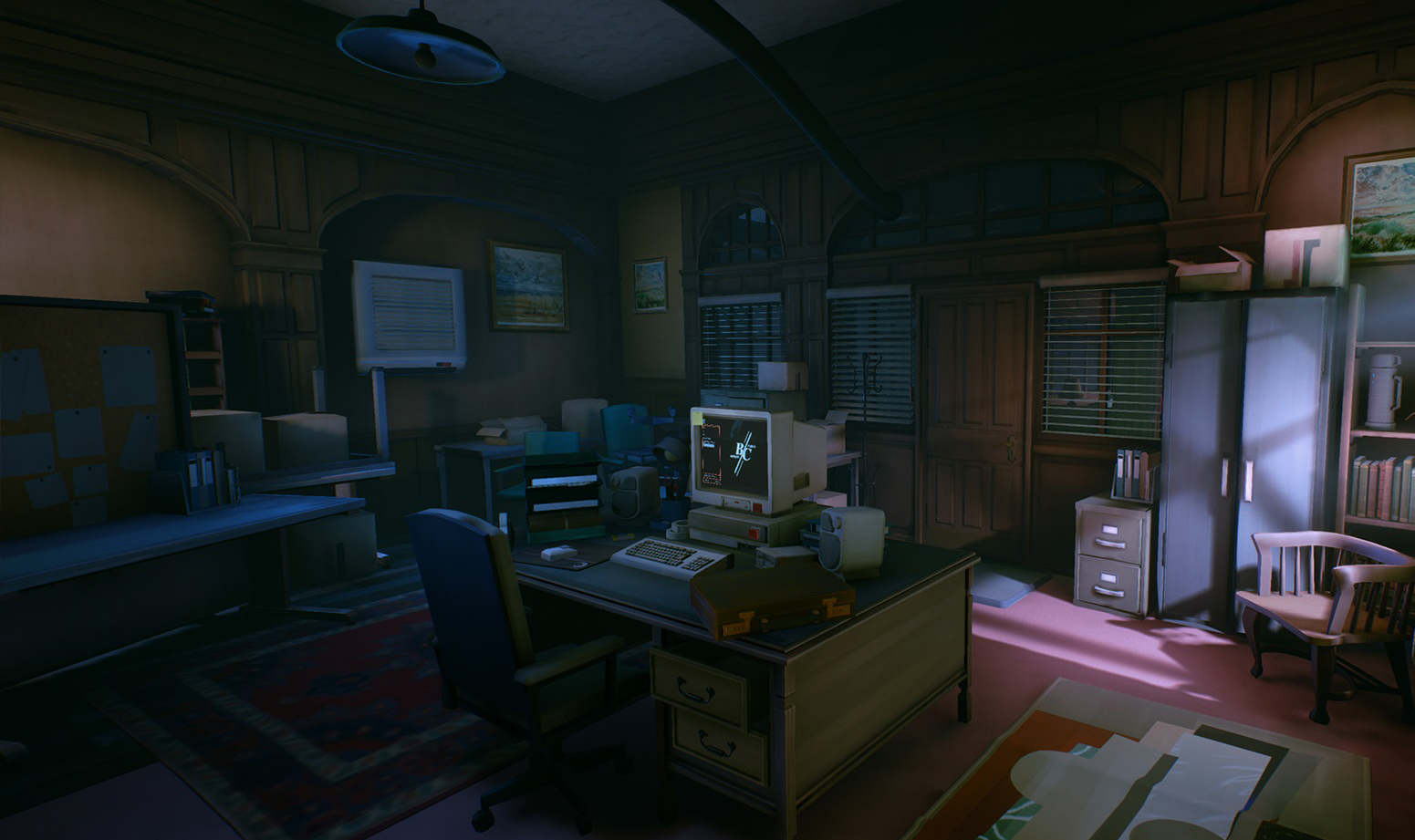 There are no weapons nor health meters in The Occupation. Instead of combat, it builds tension and urgency by putting players on deadlines, an anxiety-inducing circumstance every journalist is well acquainted with. The game is designed around the concept of fixed time, meaning the world moves forward even if the player does nothing. Once a level begins, there’s also no way to undo mistakes without starting over. In other words, there’s no editing events to tell a better story after they happen.

“I’m fascinated by the concept of a fixed time game,” White Paper Games cofounder Pete Bottomley says. “The world is living and if you decide to sit down and watch the world go by, it will continue. We’ve had some lovely emails from players saying how much of a unique experience they found The Occupation to be and that more games should be created this way.”

When the clock is always running, and the impact of every decision plays out in real time, there is extra weight placed on choice. Understanding the balance between speed and thoughtful consideration is essential for success (and easier said than done).

The same time-based design that makes The Occupation unique also divided opinions amongst critics. While some understood how the game’s emphasis on decision-making and narrative structure played off one another, others were frustrated that it was possible to spend a full hour on a level, only to fail and restart from the beginning. Bottomley can relate to players who bounce off the game for that reason, but also points out an upside to this mechanic that helps alleviate some of that redundancy.

“It’s a massive regret of The Occupation’s development because I’m a player that may spend 30 minutes here and there picking up a game when I have the time,” Bottomley says. “Although there are only two levels across the game that require an hour’s focus, I don’t necessarily have an hour to spend in a level and having to restart I can imagine is a big sticking point for players. That being said, you’ll likely find different routes and information and the world will react differently, so it’s not the exact same level.”

Even as a graduate with an advanced degree in game design from the University of Central Lancashire, Bottomley’s reflections on designing The Occupation show he isn’t done learning about the craft. Fortunately, the team at White Paper Games will soon have another chance to demonstrate what they’ve learned and how they’ve grown from their experience.

“We’re currently deep in production working on a new IP, which we’ll be announcing very soon, or possibly even already announced by the publication date of this article,” Bottomley says.