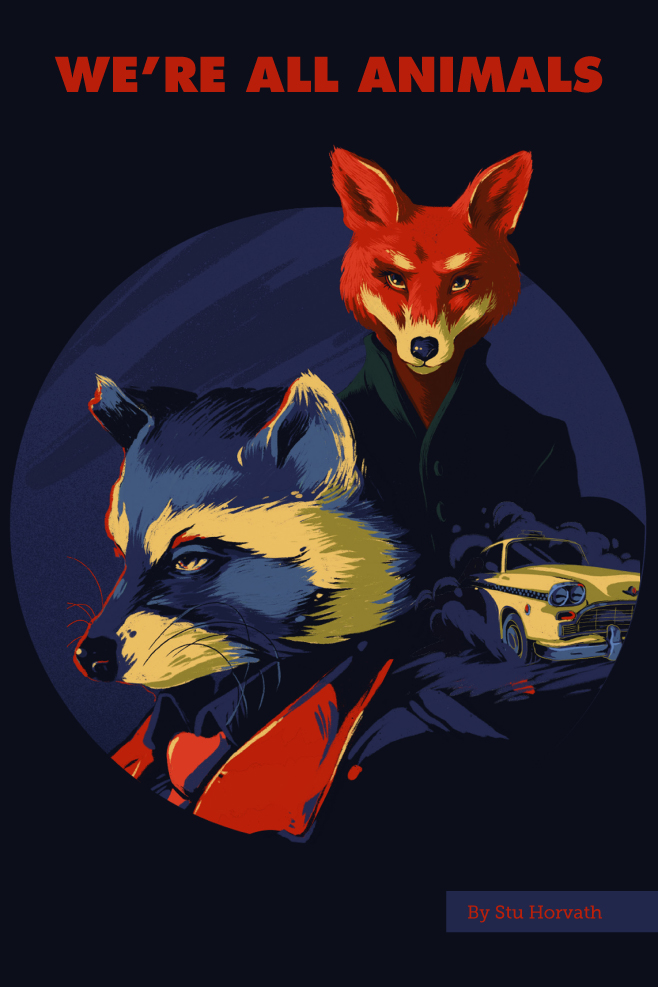 We can thank some hungry raccoons for EggNut’s forthcoming detective game, Backbone.

Back in 2017, the game that would eventually become Backbone was entirely different, a stealth game in a science fiction setting. During a conference call brainstorming session, the team was interrupted by a crash that came from outside co-founder Nikita Danshin’s home. Raccoons had stormed his composting bin. To scare them off, Nikita, also the game’s composer, resorted to the loudest thing he had at hand: his trumpet.

The incident wasn’t soon forgotten. “We were unable to stop chuckling about how fun it would be to play as a raccoon strategically stealing people’s garbage,” says Alex, “and after a few iterations, Backbone’s world of anthropomorphic animals was born.” Character designer and senior artist Kristina Dashevskaya worked up concepts for a swearing, trench coat-wearing raccoon. “We instantly fell in love, and the rest of the world building stemmed from there.” The science fiction stealth theme fell away and a raccoon detective took center stage.

EggNut began when Nikita Danshin and Aleksandra Korabelnikova met online and decided to make a game together. The two were both born and raised in the same Siberian city, Krasnoyark, but Nikita had by then emigrated to Vancouver and Alex was soon to leave for the Netherlands. Somehow, from this initial correspondence, a fully remote studio of a dozen people in Canada, Russia, the United States, the United Kingdom and the Netherlands was born.

“We all work from home, communicate through Discord and use ClickUp for our project planning and time tracking,” says Alex. “The only big downside is almost never getting a chance to hug your coworkers. We hope to get all together in one room during Backbone’s release – to celebrate and start the work on our next project.” 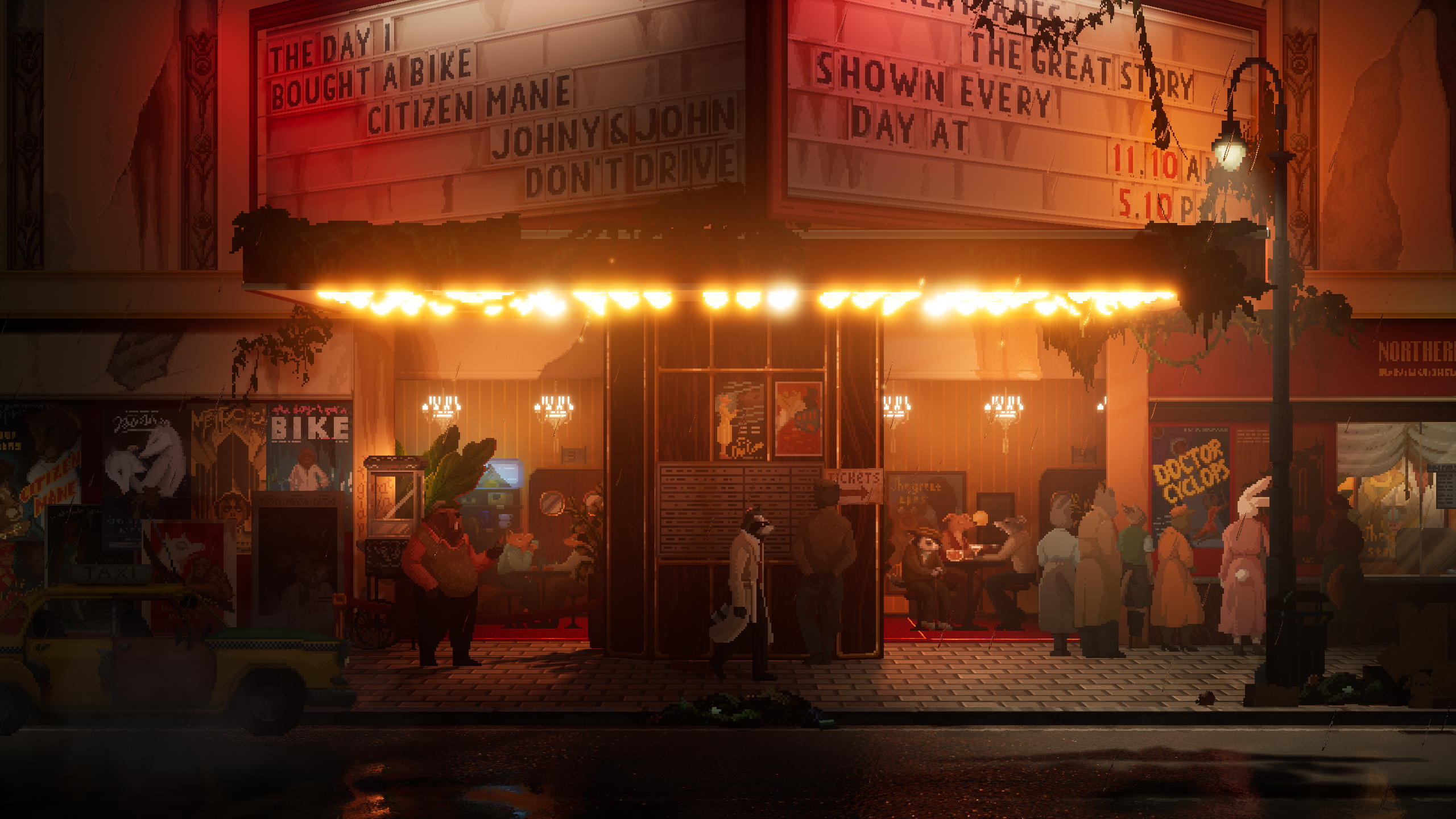 Being spread across six time zones had led to an odd work structure. “Our two devs are in the same time zone, so they mostly work together and our dev lead is about +10 hours away in Vancouver,” explains Alex. “So he starts when they finish, and it creates an organic flow of creation/review progress.” The studio essentially functions 24 hours a day, five days a week (even fully remote global studios take weekends off) and that means something is always going on.

The set up isn’t without its challenges. When you’re working from home, it is easy to overwork and risk burning out – there is always more to do. Working alone can also leave folks more susceptible to impostor syndrome, that creeping feeling that leads you to suspect that you and your accomplishments are a fraud just waiting to be exposed.

“To mitigate this,” says Alex, “we established a very simple and effective policy in our studio – work whenever and however much you want, take as many days off as you need, and keep others updated.” Folks still need persuading when it comes to taking time off, but the result has been a positive one. “I don’t understand why won’t more studios do this,” she adds. “Please, try it out!”

In crime fiction, hardboiled and noir are often mistaken for one another. Though both types of stories often find themselves playing out against a backdrop of corruption and moral decay, each sub-genre approaches that rot from different directions. Hardboiled detectives, though often flawed, usually stand as the lone honest man – in Raymond Chandler’s The Big Sleep, Phillip Marlowe finds himself memorably wanting to outdo a knight who is rescuing a maiden slower than he’d like in a stained glass window. The hardboiled detective is an outsider, in other words, coming to things after key events have played out. In noir, though, the protagonist is intimately involved in a crime, as either the victim, the perpetrator or, as in James M. Cain’s Double Indemnity, a little bit of both. Noir often features moral catch-22s and a sense of inexorable tragedy in which the structural injustice of the corrupt world looms over the proceedings, making victims of everyone. 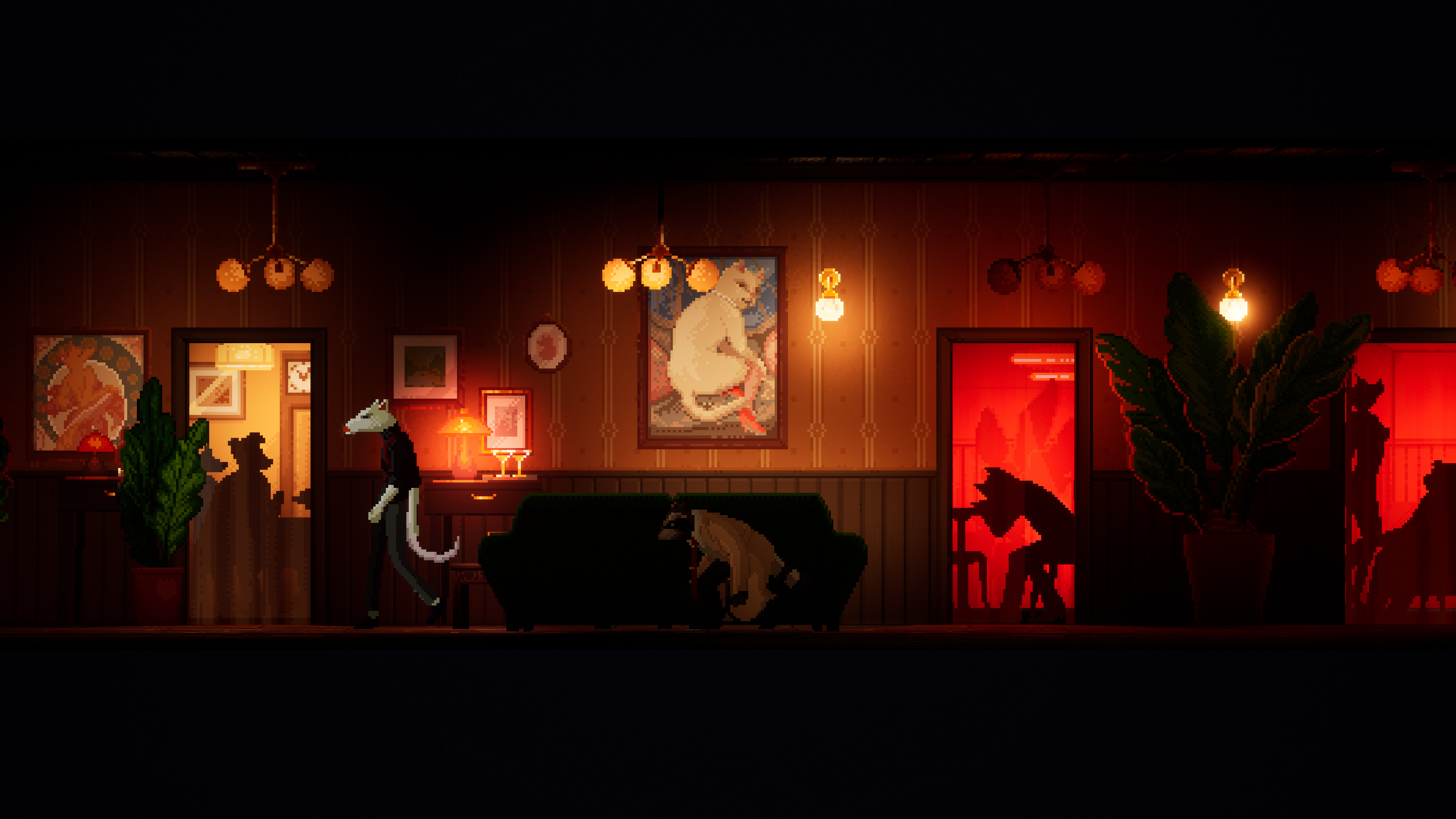 The Backbone demo feels squarely hardboiled. Howard Lotor, our raccoon private investigator, takes a case from a housewife who needs proof her husband is up to no good to serve as grounds for divorce. What initially seems cut and dried quickly snowballs as Lotor follows the trail to a nightclub that is a front for drug trafficking and other, darker deeds. Lotor’s wisecracks are just as snappy as Phil Marlowe’s, but this mystery is still unfolding and I can’t help but wonder if he’ll wind up in the role of the victim before all is said and done . . .

American noir is rooted in the language of black and white film, with its deep shadows and harsh slivers of light providing a visual metaphor for both the overwhelming corruption of the world and the dark psychological state of its characters.

Backbone’s pixel art styling offers up a similar contrast, being extremely detailed while also being soft and dreamlike. The big picture is sometimes hard to see, forcing you to squint. And when you do, surprising details emerge, as in the way Salvatore Dali’s painting of his wife at a balcony gazing at the sea changes into a portrait of Abraham Lincoln when viewed at a distance. It isn’t, perhaps, as direct a commentary as film noir’s high contrast, but it seems an apt aesthetic choice for a mystery, where clues are often obscured and meaning is elusive. 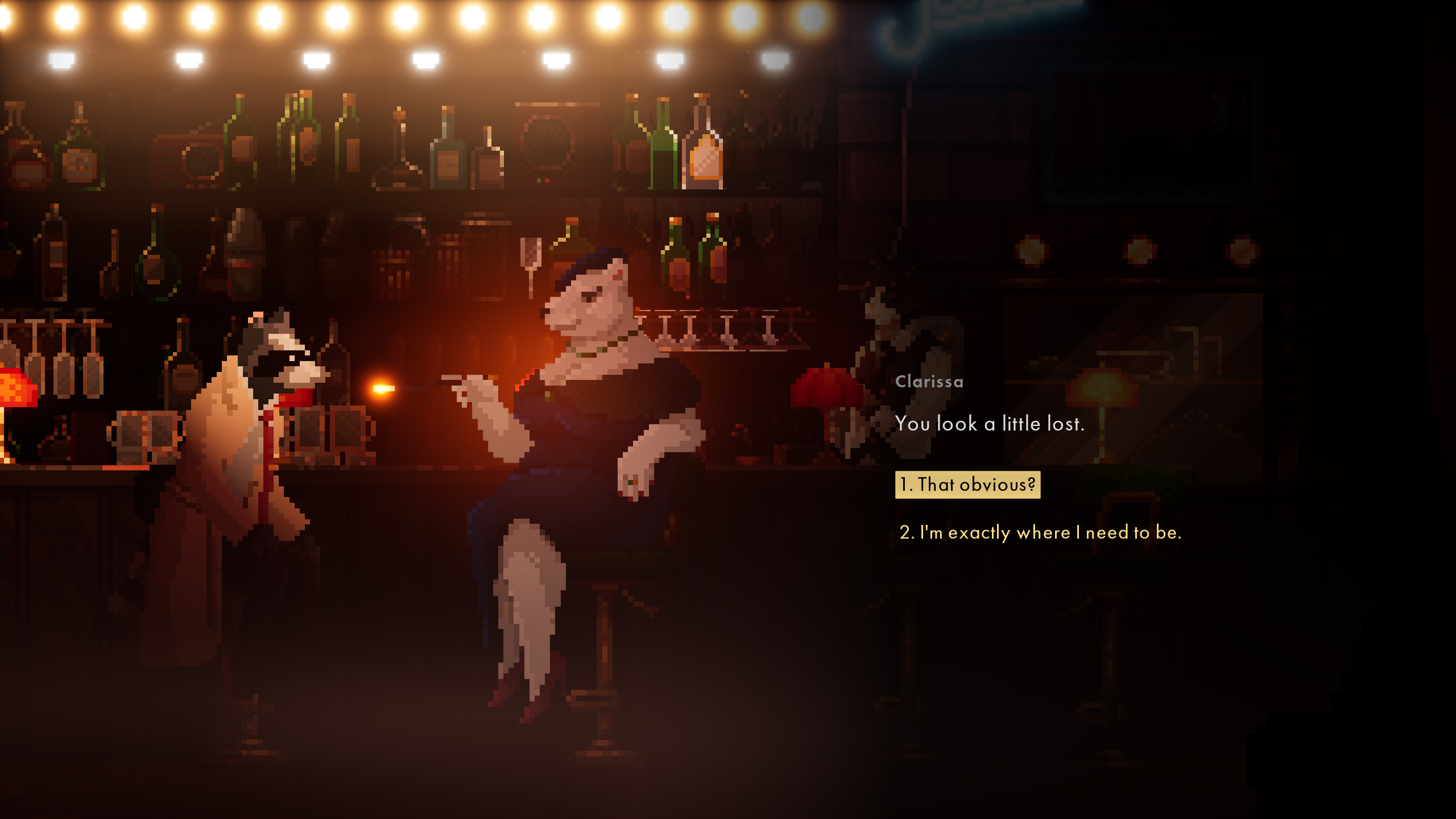 “The human city inhabited by animals, the concrete buildings overgrown with moss and ivy, the class divide – Backbone is full of contrast, when you think about it this way,” says Alex.

The aesthetics of Backbone are largely a happy accident, however. “In early 2017, Nikita installed UE4 and was experimenting with adding meshes to the 2D, sidescrolling-style level,” says Alex. “Then he started inserting point lights, materials, and particles to the mix and it just snowballed into Backbone‘s current visuals. We thought pixel art would be fast and cheap to make (absolutely WRONG), and it could be cool to add random 3D stuff on top because you can do it in UE4, so why not? That’s a common theme in our development process – trying out different things and seeing what sticks to the wall.

“There are just so many tiny details and nuances connected to the art form that it’s impossible to know ahead of production what really awaits you.”

The notion of anthropomorphizing animals – of applying human traits to animals – has been a part of storytelling (and daily life, as most pet owners can attest) since ancient times. Stories as varied as ancient Egyptian myths and Aesop’s Fables and The Wind in the Willows and Animal Farm and Watership Down use animals in various ways to tell stories about the human condition without getting bogged in the details and preconceptions of human existence.

“Unlike humans,” says Alex, “with anthropomorphic animals there are so many ways to tell a cohesive story through costume, posture and coloring. Species have a heavy connotation in Backbone’s lore, so every rat and lion comes with a set of inherent stereotypes that characters in the game believe. We want players to study these stereotypes, apply them to judge the characters and, most importantly, question and deconstruct them.” 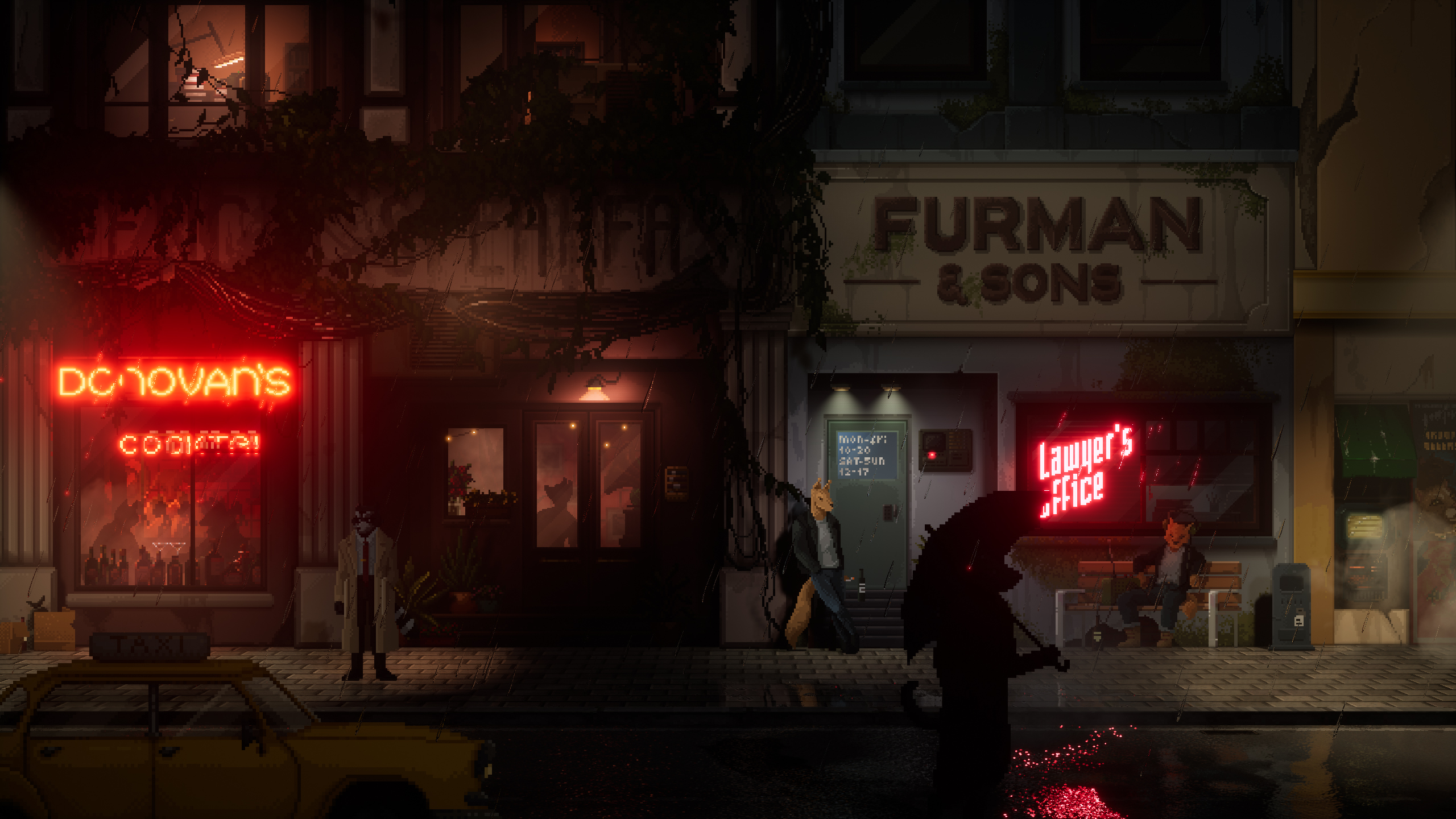 There is no shortage of animal detectives in fiction and the notions we hold about different animals allow for a myriad of different interpretations. Basil of Baker Street and Inspector Mantis are both pastiches of Sherlock Holmes, but each are distinct thanks to the very different personalities we naturally ascribe to mice and praying mantises. Just so, Howard Lotor is a very different P.I. than John Blacksad.

The world of Backbone, like any noir or hardboiled story, is one rampant with corruption and ugliness, where violence, drugs, discrimination and other real world systems of oppression are endemic. Rather than romanticize those things or gloss over them, EggNut has built their world with an eye towards interrogating them. Though they cite both Blacksad and Zootopia as prime influences, critiques of those stories have also played a major role in the game’s development. While Backbone is a story about animals, a great deal of work has been done to make those animals reflect the real experiences of real people.

“We don’t rely on biological determinism in our design and writing” says Alex, “even though the in-world characters do judge others based on their species. I think that the animal factor helps distance ourselves enough to examine and deconstruct these real world biases about real people, but there is a very fragile balancing act of trying to never hit too close home, to not appropriate and to not diminish real human struggle.

“We hope that this made-up world will showcase universal human experience through the metaphor that is anthropomorphic animal society. In the words of a modern classic by Kimya Dawson: ‘We’re all animals!’”

Backbone is coming to PC and consoles in 2021. To learn more about the game, visit the official site.

The Ad Salesman from Animal Restaurant