Monday. Another headline keeps me from writing. Another prophecy to last the rest of my life. Capitalism, recession, climate change, drought, flood, mental illness, pandemic; I live in the Anthropocene. A global, sociological, political and anthropological condition that nevertheless invades my conscious and augments those more lurking introspections.

Another arrives as I write this.

In her essay on necessity, Lauren Oyler traces the history of (ir)relevancy in the critical conscious. Today, she observes, we are compelled by relevancy, morality, “necessity” over aesthetics. Oyler presents these as polemical forces, which I don’t entirely agree with, but I agree with her assessment of “necessity” as uncritical shorthand more. As she puts it, “Necessary for what is always left to the imagination – the continuation of civilization, maybe.” Indeed, the turns she marks could be easily aligned with a greater sense of an ending in the critical sphere. Necessity makes claims of art’s purpose, and the history of these changes are, as she presents them, stuck to apocalypse, the approach of the looming, the dark times Marxist playwright Bertolt Brecht wrote of in his own polemic in 1939.

The business of telling stories at the end of the world is artistically fraught, but I can’t help feeling that Brecht, the German exile’s view, stands up to judgement better when we slide from writing about Representation to writing under fascism, during mass extinction.

While she eludes the precarity of our current time, Oyler’s brief history does demonstrate that the critics ambiguous exegesis evokes, no, rests on apocalyptic feeling. Like Roslyn Weaver writes of the prophet, the critic too “must convince its hearers that they are, indeed, living at the end of history.” And the invocation of history here is compelling. Mark Fisher also connected apocalypse fiction to the end of history. He argues this is symbolized in Children of Men by infertility – the end of a type of reproduction. Whereas he implies an end to new life and new art, the end of history in apocalypse fiction is found in the reproduction of like forms, in an inability to evade the prevailing logics of capital (and thus reproduce the same conservative story again and again and . . .).

But I have delayed these ends long enough.

– Noor Hindi, “Fuck Your Lecture on Craft, My People Are Dying” 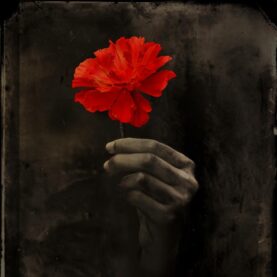 It’s an old song. Nowhere, nowhen. There isn’t much of a sense of time to Hadestown, on the road to hell or at the backwater bar the “desperate, damned ensemble” sings from, but there is a sense of place. A place outside of time, perhaps.

Despite its lack of continuity Robert Sullivan writes that “Hadestown is set in a barroom at the end of the world.” A barroom as the site of Hermes’ recitation, the end of the world where all that is left is to reminisce and, what else? Sullivan expands on this while eluding any metrics: “the end of the world feels like the edge of a Louisiana swamp or someplace in a past that keeps reinventing itself as a future where things are going but not well.” Timeless, with a sense of an ending. Perhaps so far in the future that railroads and coal mines are easily confused with antiquity, or technology has reverted and developed again and again as it is so prone to in our fictions. Even the completed love song, “Epic III,” eludes a beat with rubato and an unrooted melody. A timeless love song for the gods that once danced.

And here they are, retelling those stories. Songs we sing again as if it might turn out this time. When Hadestown premiered almost a year before the pandemic shut down Broadway, and much of the rest of the country, songwriter Anais Mitchell said in an interview that “what all of us as artists are trying to do is all of this work, all of this rewriting; this idea that you could fix the world somehow – if you could find the right words.” Hadestown is about figures who, as mythical archetypes, cannot change or escape. Orpheus will always look back for his motivations are outside of him. And it’s Hermes and Mitchell who wrote him this way, who imbue him with doubt.

The story goes like this: Orpheus and Eurydice meet; they fall in love and she falls to Hades; he turns around.

“Epic III” transforms from past to present tense as a single string on an electric guitar rhythmically beats louder and louder, that unfinished melody completed through recursion. Hermes likewise bends time as he moves between speaking at the audience and pushing the characters forward. He has as much control over the fiction as the Fates once did, but as if reading from the Book of Ages in Ted Chiang’s “Stories of Your Life,” he can’t but follow. Again and again, he sings “Orpheus was…” Yet in “Wait for Me” he hints, desperately: “it isn’t above the black top tar you’ve walked a hundred times before.” But Orpheus doesn’t wait. He arrives to the melody before the start of every measure, walking forward on a circular platform that keeps him in place.

Indeed, cycles form the very literal foundations of this musical, building out to metaphor and commentary. While the stagnant seasons serve to represent strained love and climate change, Persephone’s epilogue toasts to “those who bloom in the bitter snow.” Orpheus won’t escape the fate of his past, but he tries again and again. He finds those words; It isn’t enough to save him, but it does change the world for others. Like Hades and Persephone, Hermes and the barroom guests. Someday Orpheus will meet her again, and he’ll see her too soon. Not in the fall, but the next time the song is sung. It goes like this,

“One does not hope alone, but for others…”

It always ends like this. A millennia-long war between (varying degrees of) less than human automatons, the collapse of plans laid long ago, meaning shattered, all pretensions dismissed. NieR Automata is a future that lacks recognizable gods, a story of broken girls at the end of the end of the world. It all ends in 11945 AD. 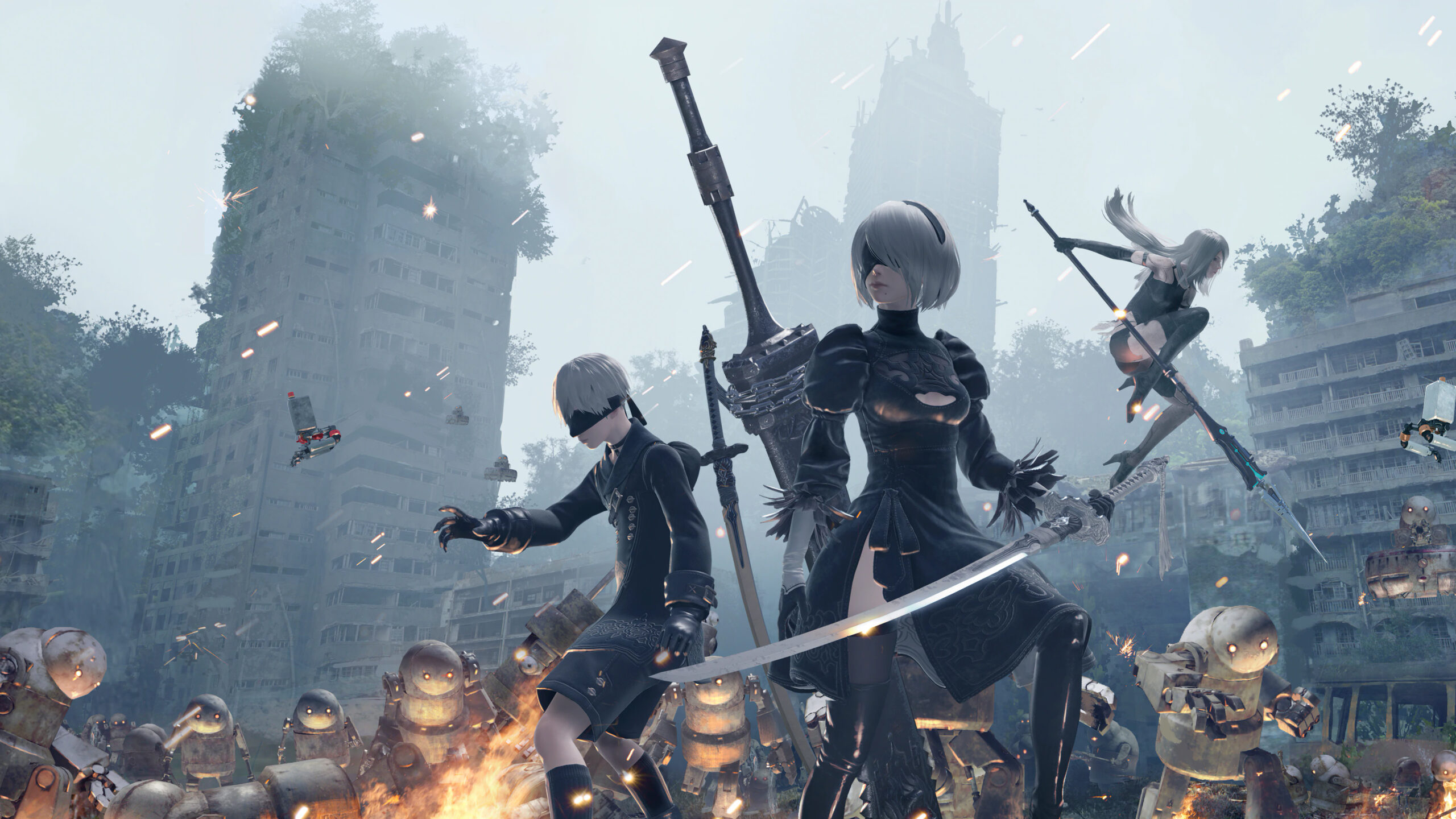 As the sequel to its own post-post apocalyptic story, NieR Automata fills time with history and colors the world in monotone. It shows a planet scarred by humans, where life can return but green won’t flourish, full of cave walls and false idols, cast aside again and again as cycles reveal themselves to its protagonists who (try to) cope. The end of the 14th machine war draws near, fought by androids – mechanized and militarized female bodies – and machines – bodies we wouldn’t have made to fight for us. The machines stopped following orders long ago. Left to their own devices, they’ve formed nonviolent communities, fuck and devote themselves to those questions both general and fundamental.

The games three protagonist, the androids 2B, 9S and A2, encounter these many responses to the machine’s existential freedom. What they learn greatly shapes their own ends: 2B, an alias, the femme fatale with a short skirt and long sword made to kill those she protects. 9S, a twinkish, advanced hacking unit condemned to be free. And the heretic. A2 was branded a traitor when she survived. Julie Muncy writes in Endgame Sequences, “None of them are human, and they all exist in the wake of what happened, what continues to happen, as a result of the downfall of mankind.” Narrative and ludic themes of cycles constantly undercut a sense progression in NieR Automata. Its characters are placed at the edge of apocalypse and it’s unclear that they could change much of anything outside themselves.

It’s not a story that could only be told in a videogame (postmodern literature is a thing), but its themes resonate with the additional conflict of agency present in the pull between author, character and player. Route A establishes the android worldview, then Route B deconstructs it, prompting character and player to question purpose and intent, respectively. And routes C and D beg characters to resist their essential purpose, to construct new meaning out of a godless world just as players resist the intention of the author to reach a better [E]nding.

In NieR Automata, god is dead and the author needs to join him. That is where hope can be found in recursion. The pods, neither android nor machine, human nor alien just watch. And we keep looking, wanting a different outcome. 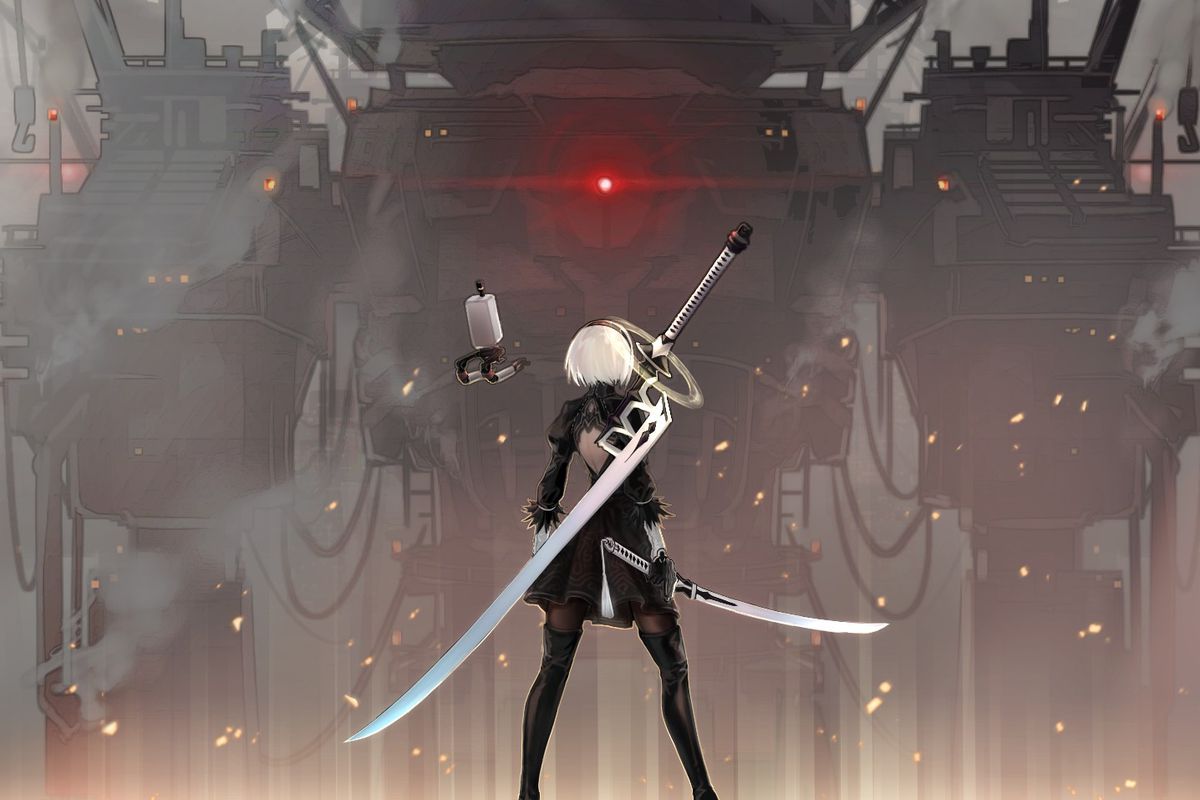 Ending E proposes a futurity to even this, finding meaning in the cycle by relinquishing the authors control over the narrative and giving characters the freedom to change themselves. It might, as it likely has many times before, ended the same way, in a larger cycle of inarticulable scale. Certainly, the possibility that they will make the same choices and same mistakes cannot be denied, but NieR Automata rejects fatalism. The pods, as the last defectors in this essential system, do not coerce nor script, affirming the past but not changing it.

So the story goes, again and again, even if the words seem meaningless.

More headlines have arrived by the time I reach the conclusion, and they don’t end. Some will remain constants, while others morph like the forest floor, concealing what was once laid bare as the seasons progress. Doubt comes in. I don’t want to regret the time I’ve spent writing; I want to believe that struggle alone is meaningful, but I’m only one girl. And I’ve been struggling with this column, which I’m turning in late again. I’ve been struggling for months now. I want my writing to be good, to repeat the words again and again until they complete themselves. I want to cast a spell that I’ve never finished. But I’ve spent the past two seasons disregarding my problems as conditional, residing within the pandemic rather than myself. What’s the difference if we don’t leave? I don’t think that acceptance is enough for me right now, but I also started going to therapy again. 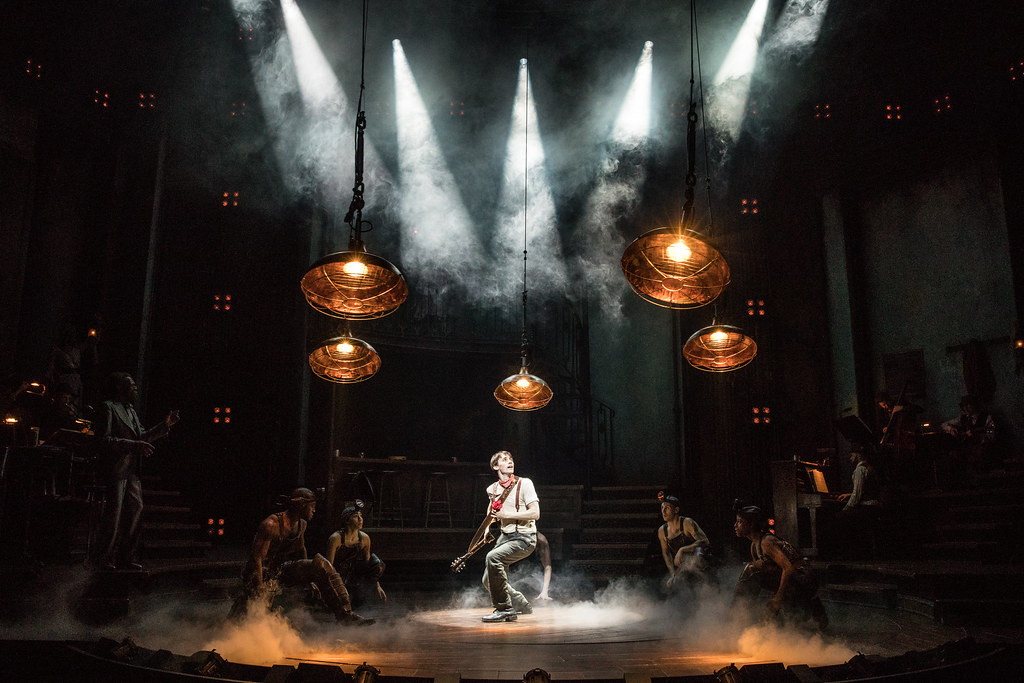 Gonzo The Great and the Artistic Struggle