This is a reprint of the main essay from Issue #35 of Exploits, our collaborative cultural diary in magazine form. If you like what you see, buy it now for $2, or subscribe to never miss an issue (note: Exploits is always free for subscribers of Unwinnable Monthly).

“You don’t choose what’s in the picture, but you decide on the frame.”

– Turtles All the Way Down 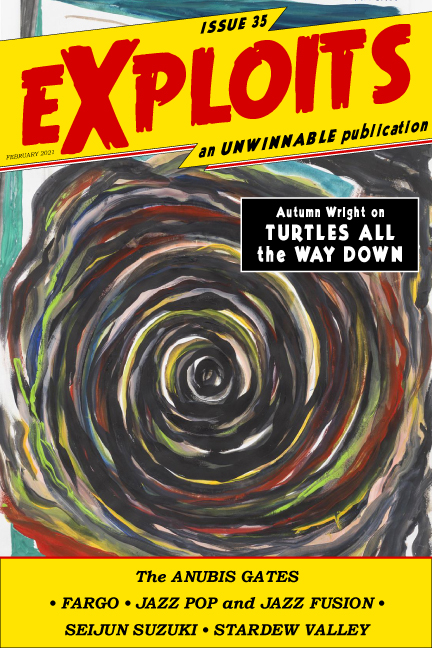 The Anthropocene Reviewed is a podcast written and narrated by John Green, the man who, depending on your age, you may recall as the older brother on Vlogbrothers (the Green brothers’ epistolary YouTube channel that cultivated a fandom-adjacent community dubbed Nerdfighteria) or the author of the book-turned-movie The Fault in Our Stars (the YA novel about star crossed lovers with cancer). I read TFIOS (pronounced tif-e-ose) in my ninth-grade English class. Only as the book got more popular did I recognize the author of my homework as, incredibly, the older Green brother.

The premise of his podcast is bathetic: Green “reviews” an object, art, emotion or another phenomenon of the Anthropocene and rates each on a five-star scale. The rating always comes last, and it is always a pithy moment until it suddenly, severely, isn’t. The star rating returns us from the high of Green’s prose, which takes the form of memoir. Or, his words: extremely in-depth Yelp reviews. Further, each episode is structured as two reviews, almost always ten minutes long, that are unrelated except for their location in the current epoch. These pairings draw out often comedic juxtapositions, epitomized most cogently by episode six: “Lascaux Paintings and the Taco Bell Breakfast Menu.” And the juxtaposition is itself commentary. Only in the Anthropocene could all this come to be equated so reductively. It’s indicative of Green’s and our experience with the hegemonic mode of reality in the Anthropocene, with capitalism’s system of equivalence, with “the contemporary human paradox of being at once far too powerful and not powerful enough.”

Green’s writing remained with me through high school as it remains with me now. I used Crash Course to study, watched more of his vlogs and my senior yearbook quote was pulled from his TED talk. Then, in my second year at university, Green released another novel, Turtles All the Way Down. One day in October I went to a suburb away from campus with my soon to be ex and my soon to be partner to watch the brothers speak. We weren’t the oldest people there, but it felt like we were the oldest fans as we sat in the mezzanine of a high school auditorium singing a recursive melody that sounded something like “Auld Lang Syne.” Green wrote about the origins of the podcast from his experiences on this tour on the show’s self-titled episode. And, upon revisiting the book with time and age, it now feels like a literary device in the middle of my story. 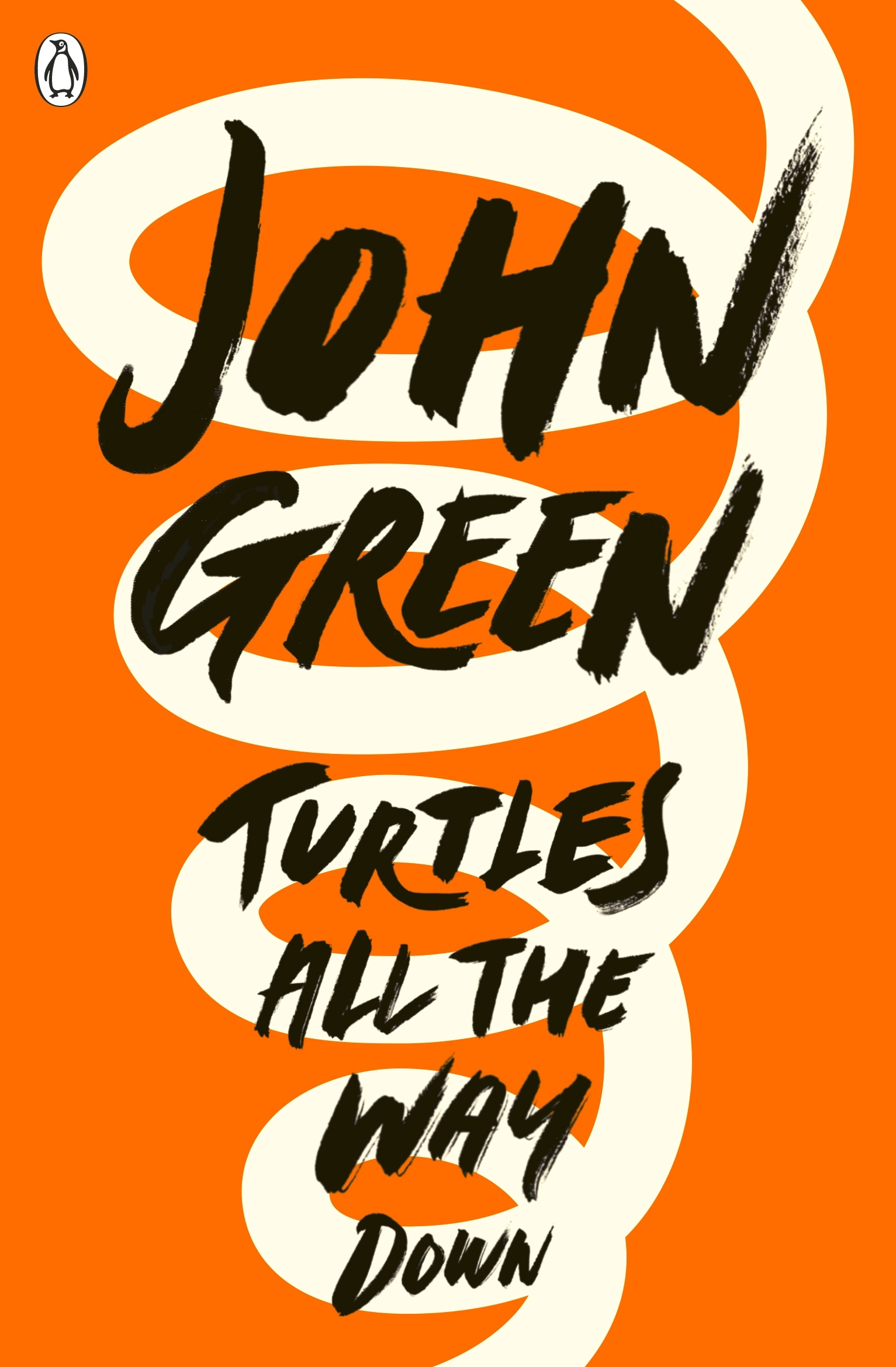 A recurring motif of Greens’ writing on Vlogbrothers and The Anthropocene Reviewed has been hope. He even says on the vlog announcing the podcast’s upcoming release as a book: “it’s about, like, hope and whether or not it is justified.” I think that may be why I have been so drawn to his work. Since I first read TFIOS, I grew up, I experienced all of high school, decided on a future, moved away from home, inevitably changed my studies and career paths, came out, fell in love. Fucked it up, how many times? But, like Green’s novels, mine is not a love story.

I listened to The Anthropocene Reviewed in the position of Turtles All the Way Down’s protagonist, Aza. When I saw Green in that high school auditorium, I had only just started taking SSRIs, still well away from the hormones that would finally make me feel something more than less-bad. I felt – I was – trapped by my thoughts, betrayed by my body that had a death drive. Like Aza’s OCD, I knew already my ideation would never be tamed, and I was only starting to grapple with the weight of that prophecy. So, I turned to Green like she does the Pettibon spiral in Davis’ home. My memories of the podcast are parked outside my apartment late at night, worn down by the classes I was weeks behind in and listening to “Googling Strangers” even though I wanted to go upstairs and collapse in bed. Or pausing “Gray Aliens” as I parked at a strip mall during the summer semester, meeting a professor that a year ago I called from the hospital because I felt I had no one else to talk to. On the interstate somewhere in central Florida, between the place that finally felt like home and the place that finally wasn’t, listening to “Auld Lang Syne,” singing that verse that I first sang between two people so important to my story and so far away from me now that my past with them doesn’t even feel like mine anymore.

And when I look back to that episode of the podcast, a memoir of Green’s career in writing and the influence of his first editor who made up the tune, I hear the lullaby Aza’s mom sings, the same recursive melody I sang in the amphitheater in Winter Park. I find a video he made four years ago now about the song. It’s from November, a few weeks after I saw him. But in the video that I must have watched then and only found again by writing this, he, incredibly, answers the question as if it is not the pressing question of our time, of my time. “Hope,” he says, “is the correct response to the arc of history.” It feels unfair when I hear it, and frustratingly recursive. He starts from the answer I have sought these past four years, and he continues to ask as if he does not know.

But maybe that is the verb of hope, the thing with feathers on it. We cannot grasp her, and so we keep looking, keep going, keep singing, keep being. We keep asking. He keeps writing, and I keep reading. Eventually, I will start writing too. Not my own story, but this one. It doesn’t end here, but that’s okay. You don’t choose what’s in the picture, but you decide on the frame. 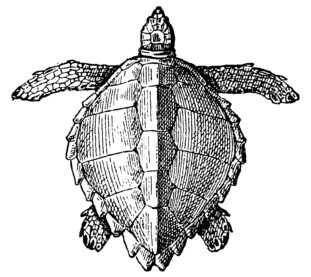 John Green, The Anthropocene Reviewed, The Fault in Our Stars, Turtles All the Way Down

The Case Against Reality