“It’s like the forest itself come to life,” says the narrator of Heart of the Woods. She’s seeing, for the first time, a giant, horned Forest Spirit roaming the woods outside a remote German village. “[It’s] like a whole mass of trees just uprooted themselves from the ground to form something that can’t possibly exist.” The narrator was a skeptic, and now she’s seeing the supernatural firsthand. She’s shocked.

But I can’t imagine why.

It may come as no surprise to you that I like creatures with cool horns. You know who has cool horns? Spyro the Dragon. Arokh from Drakan. Rowan from Seers Isle. Cernunnos, the “Gaelic god of beasts and wild places.” And Heart of the Woods’ extremely chill Forest Spirit: “Two immense horns pierce the sky, looking like lightning bolts permanently imprinted against the clouds,” our skeptical narrator reports.

The premise of Heart of the Woods, Studio Élan’s 2019 visual novel, is that a popular paranormal vlogger and her editor go to the isolated village of Eysenfeld to investigate a lead from one of their fans. On arrival, they find a lot of suspicious townspeople who’ll give them no intel, and a rather nice – if somewhat suspicious – fan who claims her cat can talk. The heroines spend the first chunk of the narrative without any evidence that their trip was worthwhile –until, of course, they find themselves in the middle of a woodland snowstorm, and see a giant tree walking past.

Back to Cernunnos. Obviously – yes, obviously – the Forest Spirit makes me think of Cernunnos, one aspect of the Horned God from Celtic mythology. He is “the lord of wild things,” usually portrayed as a bearded man with horns, often accompanied by a stag, or by a full gathering of woodland animals. He is a protector, a fertility god, a god of creation. 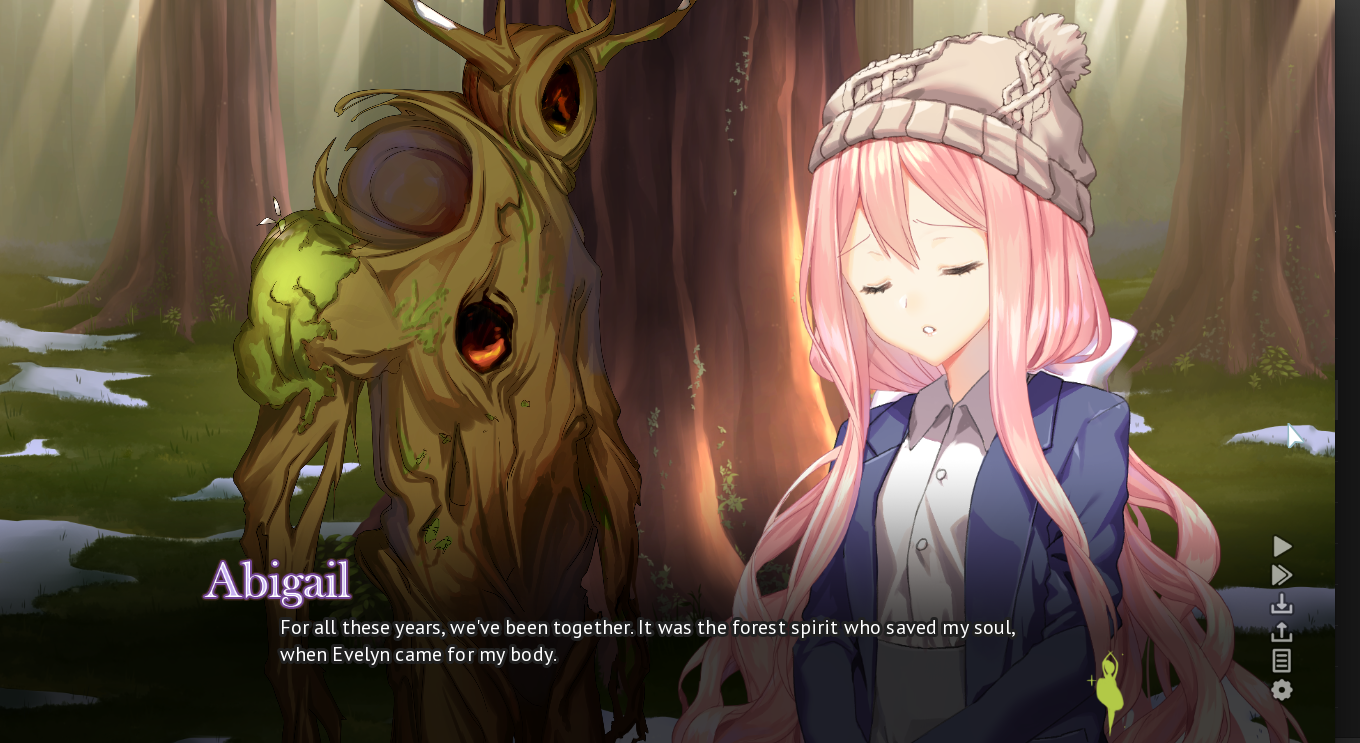 The Forest Spirit in Heart of the Woods has no human face, but it does have horns, and it does lord over the beasts and the wild places. Its presence “revitaliz[es] the air” around it. The spirit can grow or shrink at will; moss-covered limbs branch out from its trunk; two “eyes” glow from unfixed locations on its body.

As the story progresses, we learn that the people of Eysenfeld believe the Forest Spirit to be some kind of demon. They view it as a terrifying presence, and once offered it human sacrifices.

Cernunnos, too, may have been unfairly maligned. Whether or not they used the name “Cernunnos,” the Christian church warned parishioners of the witches’ Horned God. In The God of the Witches, Margaret Murray tells us that the Bishop of Coventry was “accused of doing homage to the Devil in the form of a sheep” in 1303. “[T]he cult of the Horned God was far from being dead,” Murray says. “This is one of the first British records in which the old God is called the Devil by the Christian writers of the Middle Ages.” 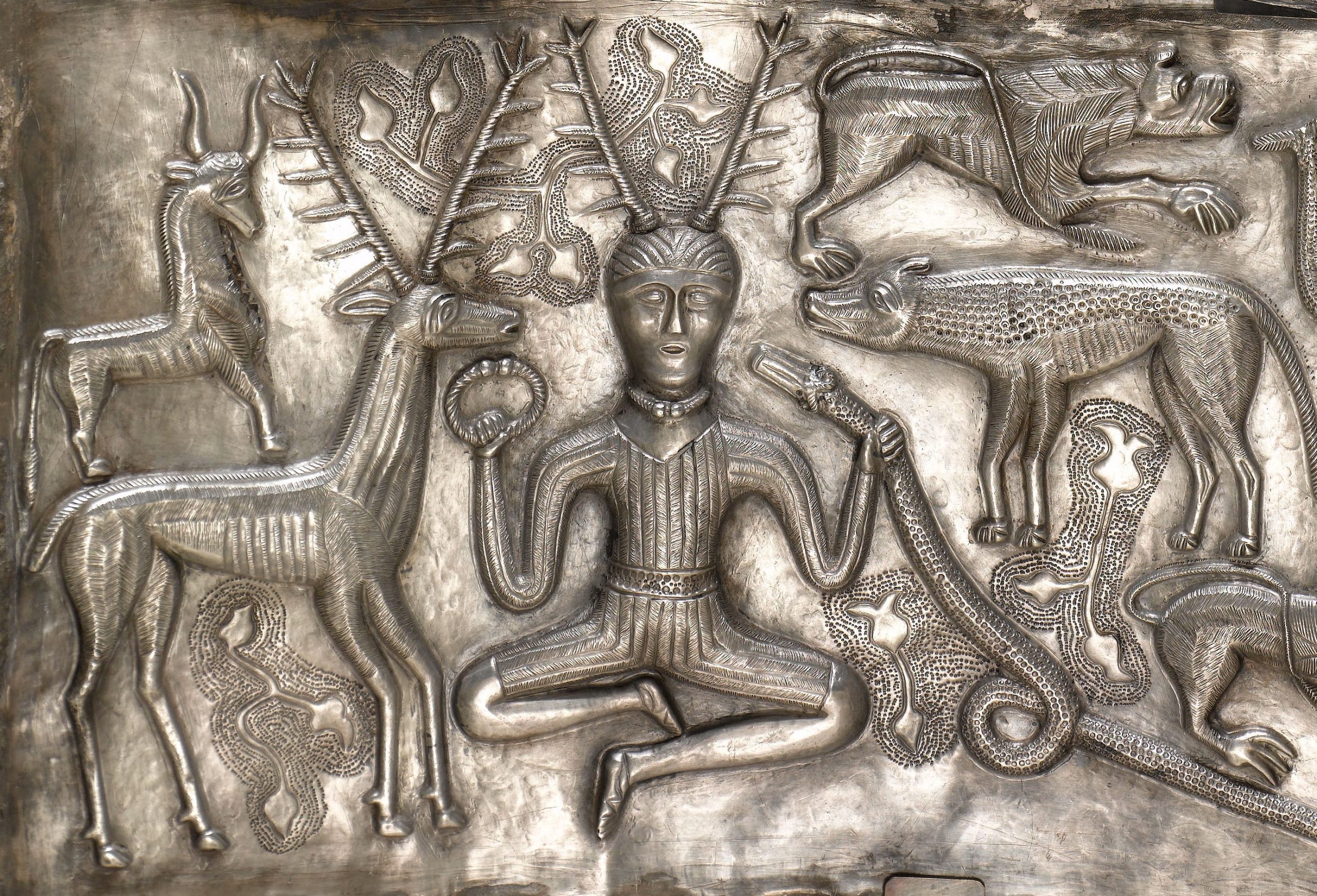 But when Eysenfeld’s Forest Spirit actually receives a human sacrifice – in this case, a character described by Studio Élan’s official website as a “really, really gay ghost” – the Forest Spirit saves her soul. It cannot save her body, but it allows her spirit to live in the woods, surrounded by lush landscapes, fairies and, eventually, some paranormal vloggers . . .

I think a lot about the forest, and in certain, more isolated spots, I feel vibes emanating from the trees. In those moments, if I saw a tall, horned tree walking by, it wouldn’t strike me as unusual. I wouldn’t expect such an entity to let me ride on its shoulders like Tolkien’s Ents, to lead me to Cernunnos, or even to protect me like the Forest Spirit from Heart of the Forest. But whether it had the face of an Ent, the entourage of Cernunnos or the glowing eye of Eysenfeld’s Forest Spirit, I would be grateful to see the forest come to life.

Cernunnos, Heart of the Woods