I’m no stranger to complaining about Christmas music starting too early – when I climbed into a cab on a brisk pre-Halloween October day this year and was greeted by a classical version of “Hark! The Herald Angels Sing” I rolled my eyes so hard I think the driver heard me. Now that we’re well into December, though, I’m decking halls and taking names. Is everyone playing Whamageddon? The rules are simple (as taken from the official website):

To those who’ve already been Wham’d, fear not: you will ride with me eternal on the highways of Whamhalla! I am your redeemer! It is by my hand you will rise from the ashes of this world!

Part of the reason I find early Christmas music so exasperating is that most of it sucks. Traditional carols are stodgy and with few exceptions, the modern revamps veer too often into try-hard territory – you want to know what “O Holy Night” doesn’t need? A bunch of showy runs, that’s what. The original stuff is similarly hit or miss: for every “All I Want for Christmas is You” or “Christmas Wrapping” (both true bops, let’s admit it), there’s a “Do They Know It’s Christmas” (classic but depressing) or a “Christmas Song” by Dave Matthews Band (nothing quite like the imagery of Jesus Christ being “nailed to his tree” and exclaiming, “oh, Daddy-o!”). There’s a small window where Christmas music reaches peak tolerability. For me, that starts the day after Thanksgiving and ends on December 25th at 11:59 PM. 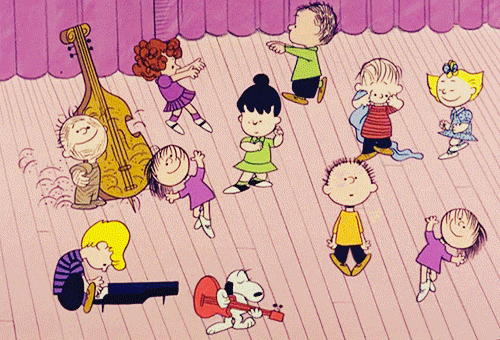 There is, however, one Christmas album that is so flawless, so quintessential, so absolutely unparalleled in its perfection that I can listen to it early – almost year-round, as a matter of fact: A Charlie Brown Christmas by the Vince Guaraldi Trio. Jazz arrangements of Christmas songs offer a lot of opportunity to step away from the holiday melodies we all know like the backs of our hands. Take the first track, “O Tannenbaum,” which starts in a traditional, somber tone but is then deconstructed into the kind of bouncy swing you’d hear in any classy cabaret, at Christmas or otherwise. Guaraldi keeps us there for the majority of the track until he brings it back home to the main melody for a few bars before closing with a coda of twinkly high notes that teasingly almost coalesce into the opening riff of “Jingle Bells.” Like the brightest of colored bulbs, it’s brilliant.

“My Little Drum” makes great use of the children’s choir from St. Paul’s Episcopal Church in San Rafael, CA – the album was partially recorded at Fantasy Studios in nearby Berkeley – by letting them carry the melody line to “The Little Drummer Boy” in that signature Charlie-Brown “ooo” while the piano, bass and drums noodle around underneath. Guaraldi plays touch and go with the main tune, syncing up with the kids for one moment before spinning off into wilder themes in the next. The musicians update the timeless classic in a way that seems fresh even half a century later while the kids’ voices keep the familiar standard securely in the realm of peppermint-tinged nostalgia – brisk and refreshing instead of musty and dull.

On the nondenominational side of things, “Linus and Lucy” makes its inevitable appearance near the end of Side A. It’s snappy and zippy, and as far as Peanuts themes go, it’s so much more recognizable than Guaraldi’s “Charlie Brown Theme” that people usually ask to hear the former by requesting the latter. Beethoven’s “Fur Elise” occupies a similar spot on the B-Side, assuring no risk of yuletide overdose with a straightforward interpretation of Schroeder’s favorite composer.

“Christmas Time is Here” is presented both with and without lyrics, the two versions split across sides. Legend has it that Lee Mendelson, executive producer of the Peanuts animated specials, had trouble finding a lyricist and so composed the lyrics to Guaraldi’s original tune in fifteen minutes on the back of an envelope. Pretty impressive, considering this is one of those original Christmas songs that manages not to suck, though that likely also has something to do with the ever-charming St. Paul’s choir being the ones to sing it.

The album’s most brilliant moment comes in the arrangement of “Hark! The Herald Angels Sing.” The children’s choir is deployed to the cleverest effect here – rather than choosing a take where the kids sound like perfect little angels, Guaraldi and Mendelson instead use a take where they’re all slightly off key, a sonic hallmark of amateur carolers the world over. The effect is witty enough to always cause real-life laughter, at least in my house. What else could one want from the perfect Christmas album than an excuse for actual mirth? If my cabbie was playing this version of the song when I climbed into his backseat this past October, I might have forgiven him his overly enthusiastic holiday reveling.

This season, whether you find yourselves in the halls of Whamhalla or just need a break from your Bing Crosbies and Nat King Coles, give A Charlie Brown Christmas a spin. Nostalgia doesn’t have to be saccharine and the traditional doesn’t need to be overly familiar. The Guaraldi Trio has been proving it every year since 1965.

Sara Clemens thinks too much about things, generally. They run a site called Videodame and retweet stuff on Twitter @thesaraclemens.