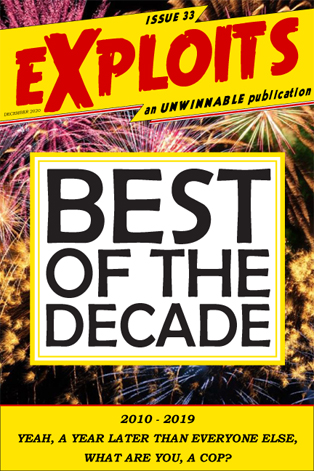 This is the introduction to our Best of the Decade issue of Exploits, our collaborative cultural diary in magazine form. If you like what you see, buy it now for $2, or subscribe to never miss an issue (note: Exploits is always free for subscribers of Unwinnable Monthly).

Pretty much everyone who wanted to do a best of the decade list did it last year. I don’t remember why Unwinnable didn’t. Maybe, in the truest of Unwinnable truisms, we didn’t care about being timely. Maybe I am still annoyed that the planet celebrated the end of the millennium a year early because 2000 feels like it should the new millennium (it isn’t – it is the final year of the old one). And yea, I know what you’re thinking: “If that is the case, why does the cover say 2010 to 2019?” I don’t know. No one voted on anything from 2020, I guess. I think there was a plan to link this to Unwinnable’s 10th anniversary, but a lot of stuff got thrown out the window when the pandemic became our new reality.

I’m not going to lie to you. It is genuinely possible that we just didn’t think of it in time last year, shelved the idea until this year and made up some elaborate excuses to make us feel better for not being more on it with our list game. Independent publishing is full of mysteries like this.
All that said, the best of the decade is here in your hands now. And that’s OK, because we have a bunch of folks in the mix this year who weren’t around last year, and that makes these lists weirder and less predictable than they otherwise might have been. And yet, everything I considered the best of the decade managed to place, so I don’t feel entirely old and out of touch. Which is all you can ask from massive lists like this, honestly.

Anyway! Like our year-end lists and every issue of Exploits, each section was lorded over by its respective editors. You can see a difference in approach and priority as you go through the lists. Big thank yous to Ed Coleman, Noah Springer, Levi Rubeck, Amanda Hudgins, Sara Clemens and Khee Hoon Chan for pulling it all together. And to everyone who participated in the vote and wrote blurbs. More than just the best of the decade, this list represents an astounding amount of time listening, reading, watching, playing and generally engaging with popular culture on whole.

But enough from me. Dig into those lists. Find new, amazing things. See you back here in 2030.

Best of the Decade

Searing and Soaring with Jeremy Enigk