This is an excerpt of a feature from Unwinnable Monthly #131. If you like what you see, grab the magazine for less than ten dollars, or subscribe and get all future magazines for half price. 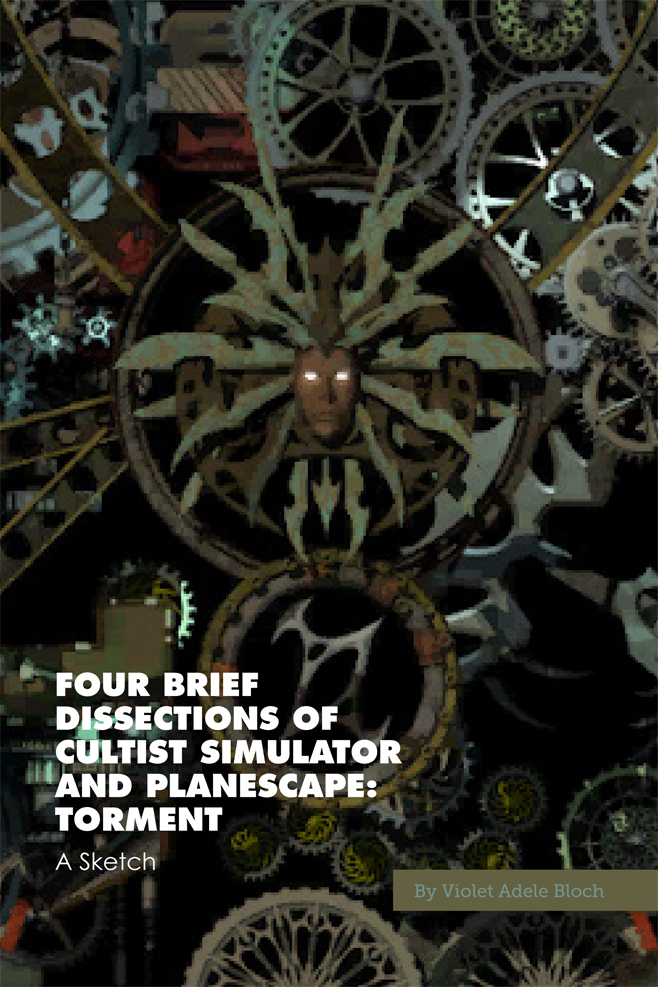 Planescape: Torment?—?or just Torment?—?is an RPG by Black Isle. It’s old, it controls like a DVD menu, it was created (in part) by an alleged serial abuser, and, for the past 21 years, it’s been held up as one of the crowning achievements of narrative design.

When you start a new game (a New Life, as the menu calls it), Torment throws you into the role of a man with no name, who wakes up, half-naked, on a stone slab in a mortuary. You have no memory, no possessions, and no idea where to begin. Your body is gray like a corpse, unfamiliar, crisscrossed with tattoos and scar tissue. The only other character in the room is a floating skull named Morte. He speaks with a Queens accent (for some reason), and he wants to help you.

He reads a cryptic tattoo off your back?—?it mentions a journal?—?and, together, you set off into the dungeonpunk city of Sigil to find out who?—?or what?—?you might have been before you lost your memory.

If you get stabbed in an alleyway, you’ll get carried back to the mortuary. If you fall in combat, your friends will drag your corpse to safety so it can stand back up. If you snap your own neck for a bet, you’ll be awake in a few minutes to collect your winnings.

But instead of reveling in it, you’ll see it like a curse. You weren’t given life, you had your mortality stolen. You’re unwhole, in a way that makes death spit you out.

And, in so many words, that’s the center of Torment’s story: it’s an ontological mystery crossed with a suicide attempt. You’re trying to figure out who and what you are, but it’s all so you can die like everyone else.

According to most critics, Torment’s combat design is awful. I actually don’t agree — if you’re a wonk for the quirks in the AD&D 2e ruleset and the ones in BioWare’s Infinity Engine, the combat can be pretty enjoyable. It helps to pull the system apart like a speedrunner, but to still contextualize every action taken within the fiction. Eating a fistful of intelligence-boosting charms made from taxidermied cranium rats in order to talk someone out of stabbing you is very weird, yes, but it fits.

Although I like it as an extension of the roleplay, though, Torment’s combat is almost entirely vestigial. I’d argue that the actual game of Torment only has two verbs: ask, and answer.

The catch is this: nothing you learn is ever complete. And that, more than anything, is what defines Torment: it lies to you.

Which isn’t to say it’s opaque or frustrating. The game’s playfulness lives in the rhythmic push-pull of its dialogue. Its fiction is built on arguments, flirtations and half-truths, and it thrives on small exchanges of power.

As someone who’s intimately familiar with Torment, it disappoints me but doesn’t shock me that the game’s lead writer Chris Avellone is allegedly a prolific industry predator. The game’s spark is, in a sense, predatory. For lack of a better term, it’s seductive — confusing, engulfing, and comforting, in a way that’s eerily familiar to me as a victim of abuse…

Violet Adele Bloch is a hapless arts journalist and narrative designer. Her work emphasizes storytelling and confessionalism, and it often deals with ideology, identity and queer sexuality. You can find her tweeting about stars, cats and girls @violet_bloch, and you can read her least timely hot takes in her newsletter astronautics.

You’ve been reading an excerpt from Unwinnable Monthly Issue 131.