Imagine you’re a shapeless tentacle creature trapped in an underground government facility. You escape your tank and every other living being around you screams and panics; they reach for guns and try to force you back into isolation. You don’t want to be a monster, but the situation you escape into leaves you no choice because you simply look the part. Does this sound like a “reverse-horror” experience to you? No, it’s a cautionary tale of misunderstanding on the basis of bipedal privilege. The story is a tragedy of generalization; a creature’s physical appearance does not reflect its character.

Who among us hasn’t glanced at our corporeal meat husk in a mirror, despondent, lonely and misunderstood, only to reach the incorrect conclusion: “I’m a monster.” All it takes is a particularly lonely day, or perhaps half a year spent in social isolation, for even the sanest among us to feel intrusive insecure thoughts creep in. Lucky for us, no matter how long we spend separated from the world, our bipedal form will continue to remain socially acceptable. Even when we feel like it, our personal monstrous self-identifications will go unproven. For whatever reason, bipeds make people comfortable and subverting those expectations makes for a more effective horror game.

Phobia Game Sudio’s Carrion released in July to wide acclaim, namely because of its “reverse-horror” billing. The coined term is an apt one as, according to the game’s description, players “assume the role of an amorphous creature of unknown origins, stalking and consuming those that imprisoned you.” The “reverse-horror” label implies that players assume control of a creature from our nightmares, however the game’s description paints a different picture. The creature is seeking vengeance on those who wronged it, but that makes it no more of a monster than the bipedal caped crusader, Batman. Carrion’s blob and its many, many arms would be used for hugging were it not frustratingly incarcerated in a government facility. In fact, the game’s shocking and tragic conclusion reveals that the blob is no blob at all, simply a human who had an incredibly unfortunate day. 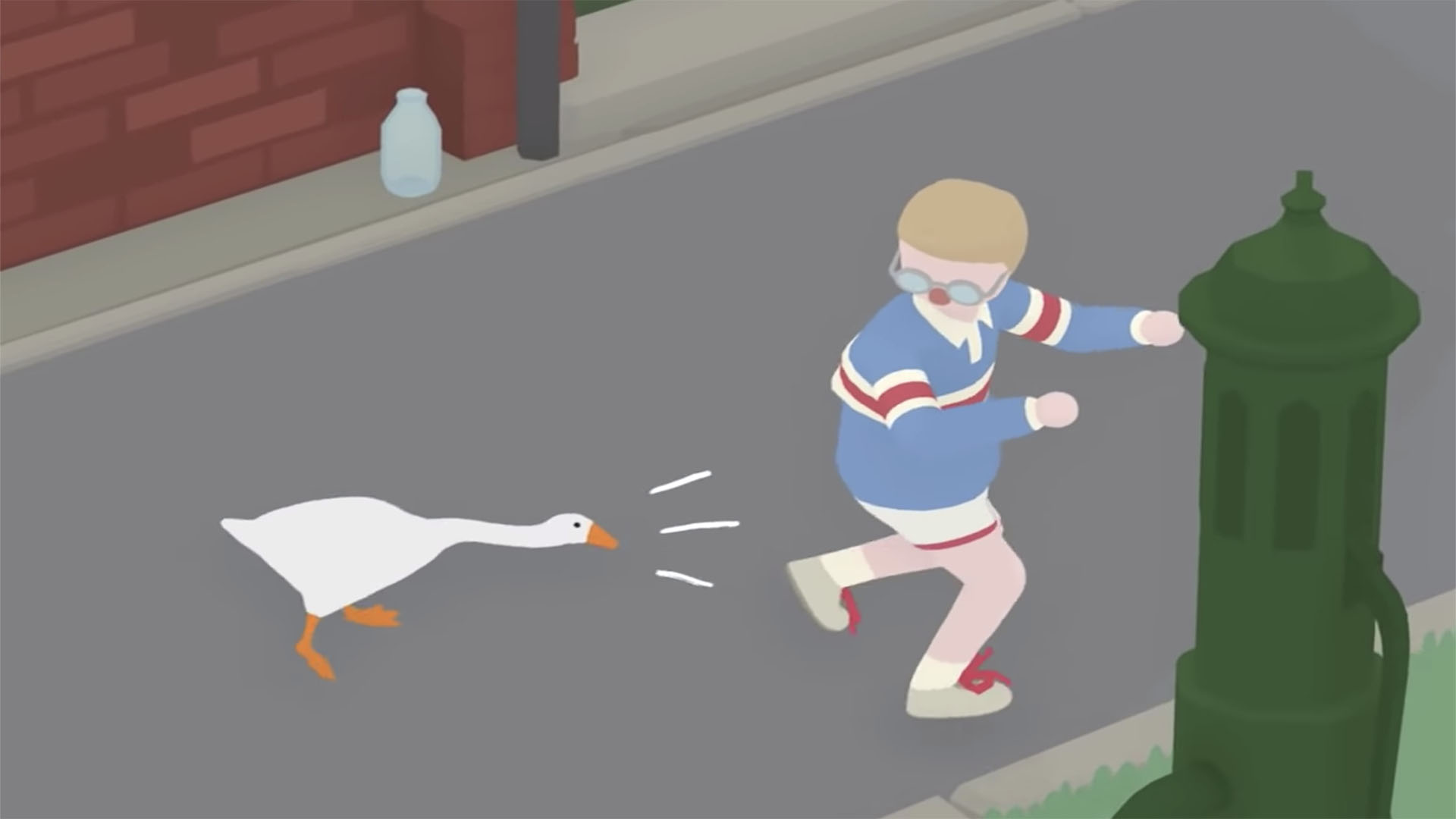 If you are looking for a truly frightening and original “reverse-horror” game, look no further than House House’s Untitled Goose Game. Aside from the obvious anatomical distinctions, the primary difference between Carrion’s misunderstood blob and Untitled Goose Game’s bad, bad goose is the way the creatures use their agency. The blob is assumed to be an evil horror monster because of its appearance, yet Carrion sees it simply use its agency to escape imprisonment. Meanwhile, the villagers in Untitled Goose Game aren’t initially frightened of the goose because of its normalized appearance, so the goose abuses its bipedal privilege and weaponizes its agency with malice. Its actions may seem like innocent pranks, but the goose presents a more realistic – and dare I say probable – reality in which hell-on-Earth is not brought by four horsemen but instead a single malevolent waterbird.

Untitled Goose Game is the superior “reverse-horror” game because it is the ultimate power fantasy. Players wield the no-good goose to horrify and terrorize a quaint English population. Yes, Carrion provides its own sort of power fantasy – players control the ever-evolving blob and decimate legions of government employees – yet that power is tinged with desperation. The blob’s ultimate goal is carnage and freedom, but the goose provides a more grounded power trip that is rarely found in gaming or anywhere else. Untitled Goose Game’s primary objective is havoc; it grants players the ability to be unabashedly, unrelentingly petty while hiding behind the adorable guise of an evil, evil goose.

The relative realism inherent in Untitled Goose Game scratches an itch that other games, and even other pieces of media, fail to reach. Videogames like Carrion trend toward the unrealistic by touting power trips revolving around excessive, gratuitous violence or fantastical worlds. Other media, like the 2004 film Mean Girls, grant audiences the ability to relish in a realistic level of pettiness, rudeness and vengeance. Yet, when consuming these other forms of media, audiences give up the control built into playing a videogame. The middle of this Venn Diagram – one composed of a misconstrued flesh creature and the iconic 2004 teen-revenge comedy – is home to a goose. That bad, bad goose allows you to affect your environment rather than simply observe it. Players enact all manner of meanness and mischief throughout the village while still preserving some level of realistic decorum; the goose can’t gobble people up (as far as we know), but it can steal a villager’s glasses and send a frightening honk their way.

Everyone has their own disquieting horror stories featuring a belligerent aquatic bird (if you’re lucky enough to have thus-far escaped their ire, consider this poor golfer who lived through a real-life nightmare). Perhaps these experiences are not as terrifying as being devoured and torn apart by a toothy, inhuman government secret, but goose-related ordeals are more likely to come by and thus more horrifying to reckon with. The grounded and unfortunate likelihood of a goose assault is why Untitled Goose Game is the more effective “reverse-horror” experience. Carrion’s creature may appear to be the more monstrous of the two, but the horrible goose abuses its normalized bipedal appearance to prove who gaming’s true apex predator is.

To make matters worse, Untitled Goose Game’s horror will expand on September 23 with the addition of a second playable goose. Of the update, developer House House describes “[playing]…as two horrible geese, honking twice as much, teaming up to plan pranks, and generally ruining everyone’s day, together.” Birds of a feather flock together, but when those feathers belong to a pair of avian assholes, the whole world should quake in terror. Those poor villagers have no clue regarding the hell that is about to come down on their sleepy, idyllic village. God help them.