My collection of Zot’s black and white run is split in two sections, one titled “Heroes and Villains” the other “The Earth Stories.” The comic itself is similarly split between worlds and genres. The title character is the superman of another earth, one where, sometime after World War I, things just worked out. Poverty is practically non-existent. Despite the fabulous, unreal cities, the environment remains alive and well. While forces like the military and the police still exist, they stand to the sidelines, practically discarded. Zot fights villains, but most of them represent long defeated dystopias. Structural issues confine themselves to a single individual, defeated by the end of an arc. There are hints of evil, other worlds where unrestrained capitalism runs rampant or military dictatorships kill for power. Even with these glimpses though, darkness remains in the margins in the world. It is a utopia.

Our point of view character, though, is Jenny, Zot’s girlfriend from earth, our earth. Her parents are shambling towards divorce. School is cruel and boring. Her world seems dead, but Zot’s still frolics and dances. Although each plot in the first section has its own central character and theming, the story constantly returns to Jenny longing for that other, better earth. In one story, Jenny is put under by a menacing robot, who forces her to dream of an earth without an alternative, without Zot. The contradictions tear her apart until she realizes the truth and awakes. In that same arc, due to a complex science fiction contrivance, every person on Jenny’s Earth sleep-dances. It’s a mirror of Zot’s world, a harmonious place without conflict. These joys do not last. The worldwide peace only lasts the night.

Similarly, the story cuts itself out of the dream of a better reality. In the first section, the action flips between Zot’s world and Jenny’s, but the plot concerns the utopia. Until, that is, when Jenny and Zot get trapped on her earth. The reminder of the volume is made of slice-of-life stories. Several of the issues follow one of Jenny’s friends, giving a glimpse into their daily life. Jenny’s best friend comes out as lesbian. A small D&D group forms. Graduations, school newspaper articles and smelling the leaves in the fall are all dwelled upon. Still, the other world looms over these stories like Communism’s specter over Europe. Zot can still fly. He lives in a suitcase (bigger on the inside). Jenny longs to leave this world behind and is terrified of the possibility that she might never go back. Zot, though, rolls with the punches. He tries to do the superhero thing in New York. Though mundane evil often defeats him, he still believes he can make the world better. It speaks to the heart of the comic’s storytelling: the tension between real and imagined worlds and the possibility that one might become the other. 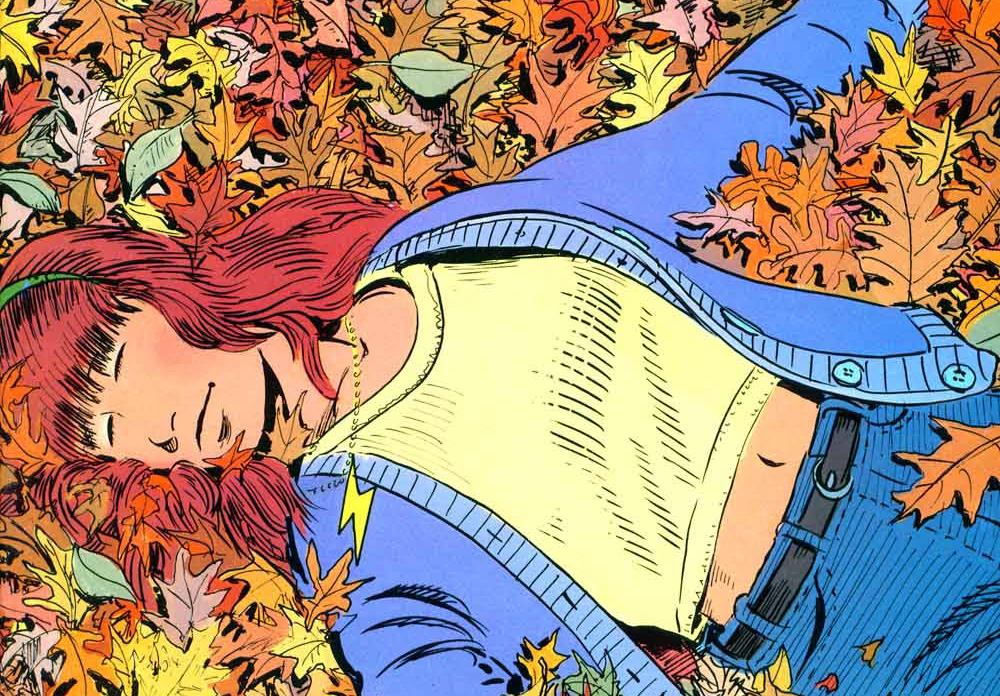 When looking at the history of Zot’s creation, that tension only makes sense. Scott McCloud wrapped up Zot just before he started on his decade spanning theoretical work beginning with Understanding Comics. Unsurprisingly, the book is formally adventurous. You can see minor experiments that McCloud directly addresses in his later work, such as panels without borders or markedly different amounts of realism to establish different tones. Still, even as the comic moves from heartfelt super-heroics to grounded slice-of-life, there is still a spandex wearing, noble hero, his bright colors hiding under a plain collared shirt and jeans.

In this image, Zot finds itself at both a meta-textual and political crossroads. Zot is heavily influenced by manga and ever growing independent comix scene. As the book goes on, splash pages transition from science fiction cityscapes to gas stations in the rain. The stories become more melancholy and contemplative. McCloud fills more panels with facial expressions, body language and landscapes. It stretches toward a daringly human and adult comics scene.

Still, Zot remains; McCloud calls him his security blanket. While the stories push towards a more diverse future for comics, it seems unable to completely let go of the childhood dream. The last issue visits every single side character and shows the ways they hide from reality and long for something else. The series concludes with every character who we’ve followed through daily struggle visiting Zot’s world. They lose themselves in it, for a time. In these moments, superheroes are a liberating force, rather than one that feeds and embodies the status quo. 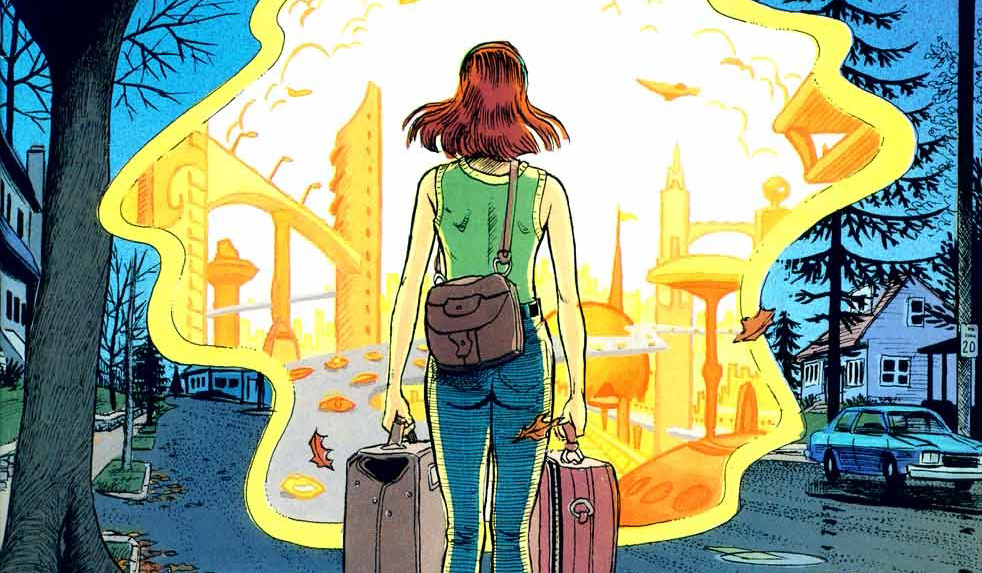 The fact is, superheroes are often propagandistic means of preventing a better world. Big budget superhero movies are subsidized by the military and advertised through recruitment. Even before and during McCloud’s time, when superheroes were not the cultural force they are today, they often served the material interests of the US. For example, the comics code, founded in 1954 helped suppress alternative comic movements. Super comics, then and now, are reflective of how they were built. “We proceed from an actual economic fact,” Marx writes in “Estranged Labour.” Superheroes are no different.

Zot is as aware of this history as anything else. However, it still longs for superheroes as beautiful ideals and keeps them around in mundane settings. Zot becomes a reminder of what things could be. As the characters go about combating homophobia at their high school or even just trying to maintain friendships, they are driven by Zot’s optimism. His second earth erases the economic fact’s imprint. Its utopia frees from the pressure of poverty and of capital. It has its limits. The USA, after all, still exists in it. Those from our earth can only visit. None of them stay. It still gives vision of another peaceful, content world.

Zot’s central image, the one that my collection’s cover bears, is a kiss. Zot leans out of a portal to embrace Jenny. Two worlds, utopian and mundane, heroic and civilian, touch. A unbridgeable thing is suddenly crossed. The future feels possible. There is a tension between the world that is and the world to come, between the moment before revolution and the revolution itself. Materialism is, in part, the belief that things can change, rapidly and swiftly. Zot kisses Jenny in an affirmation of truth. This world is worth fighting for. It is not dead yet.

That $70 Sword of Damocles