We will start at the end, with autumn, where we find ourselves now. Not the end, but an ending, the concluding chapter of all that has come. In “To Autumn,” Keats illustrates the march deathward: the fruitful growth, the harvest, the dying music of gnats on the last warm breezes before all is still and cold. Autumn is the ending of things and we are in its third stanza.

Always Autumn is a space to explore a theme across many texts, mediums, genres and modes. Through discursive writing – taking up the spaces of the table, the page and the shelf – I find ways to disorient myself and present to you, reader, my reorientation. Because we, or I do at least, find this feeling necessary. It is in the reorientation of things that we learn, write and make sense. We will do so a chapter at a time, first here, in the autumn, before moving to a different path to take up a new theme. These changes may occur seasonally, or, perhaps, come and go like the warming autumns of our time.

Having grown up in Florida, I’m unfamiliar with seasons to begin with. My experience with the cool grey skies and orange leaves of fall and the melancholia associated with them comes almost entirely from pictures and media, the objects of my fascination here. And now that I’m reaching an age where I can (theoretically) travel and move away from school and home, fall is becoming a shorter, less expressive interlude between long, harsh summers and blasts of winter. I may never have that either. So why do I feel this nostalgia? For autumn, and for the old world that was promised alongside the seasons? 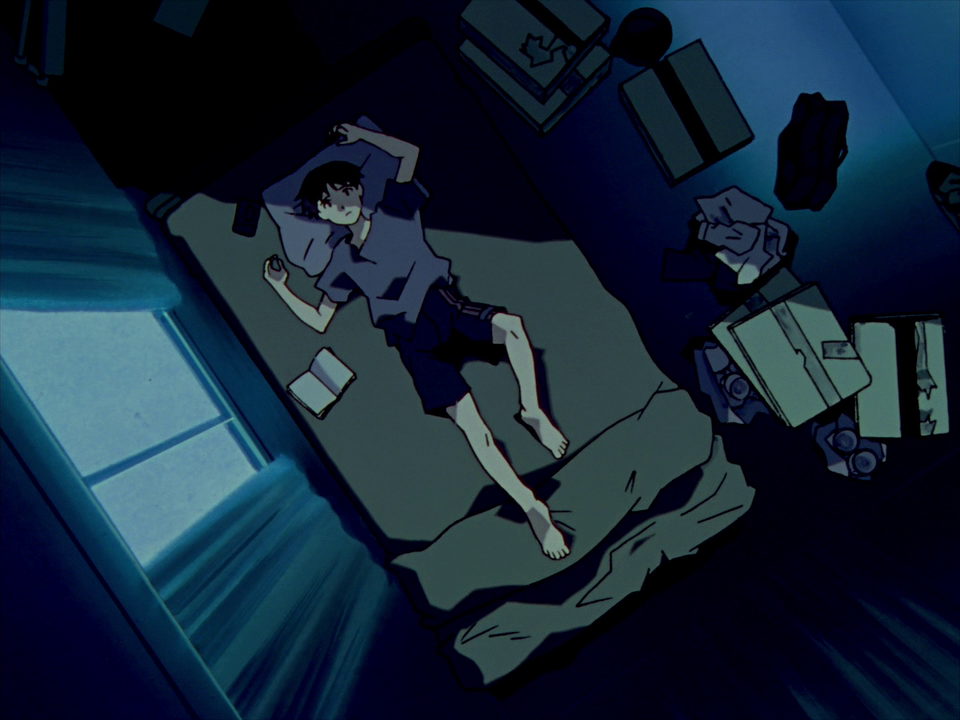 Neon Genesis Evangelion is about rebuilding at the end of everything. In episode 21, former professor Kozo Fuyutsuki laments to his former student Yui Akari, holding baby Shinji, over the loss of autumn. His is a nostalgia for what can’t be rebuilt. Everyday is the same without the fall of the leaf. Indeed, the anthropocene may be characterized by its stillness: the stillness of Japan after the Second Impact, the approaching stillness of our ocean currents, the stillness of living indoors with no social gatherings, the stillness of suddenly losing every structure you once kept time with. Shinji, and all of the other pilots, will never know the blue oceans or the changing seasons, but they grow up in a world desperately clinging to the normalcy of movie theaters.

Girlhood, a girlhood that never even happened, cannot be rebuilt. In her A Field Guide to Getting Lost, essayist Rebecca Solnit writes “even nostalgia and homesickness are privileges not granted to everyone.” But we can still miss that which we haven’t lost. What’s painful about this nostalgia, and what makes Fuyutsuki’s recognition of his loss so striking, is that it’s irreconcilable. Loss is not itself a precondition for loss. Or, rather, we may come to lose in other ways. Autumn might be the season of losing, of becoming lost. So I hold onto anything. My own name – the name I chose – and to those things that I never had.

I wonder if Shinji and Asuka miss autumn as much as me.

This fall is the first time in 17 years I won’t be attending school. Instead I’m returning home, with a new gender and politics and culture and ways of orienting myself, under circumstances that have put any future on hold. There is no winter to give way to spring. Fall is an ending

and it is ending.

On The Legend of Korra and Imperfection
Previous Post