This excerpt is from a feature story in Unwinnable Monthly #127. If you like what you see, grab the magazine for less than ten dollars, or subscribe and get all future magazines for half price. 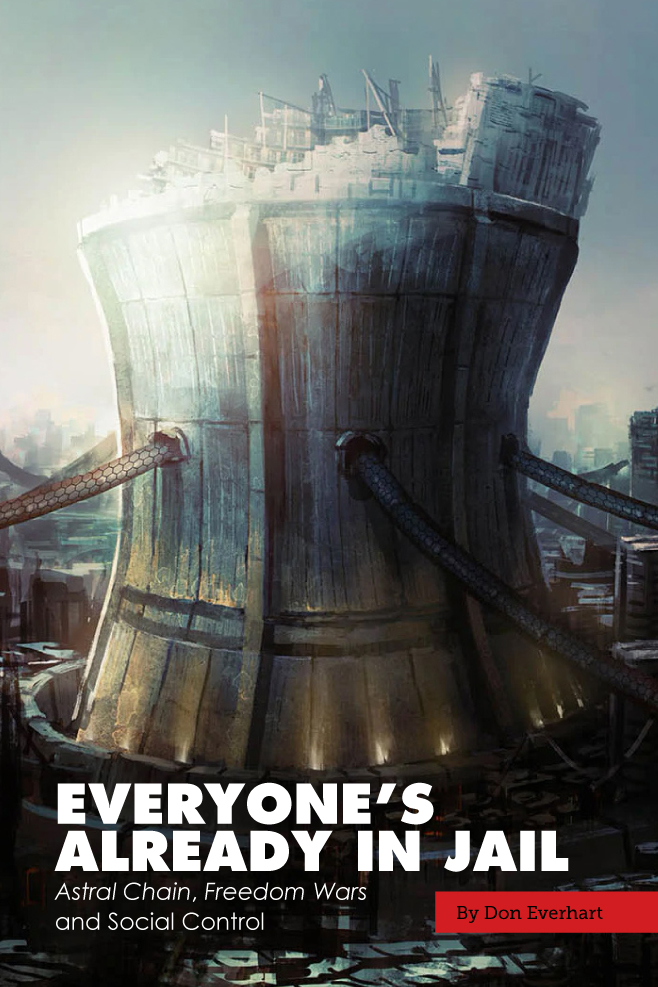 There are almost as many videogames about prisoners as there are videogames about police. I understand the allure: from the perspectives of narrative and game designers, it’s helpful to be able to put players into contained, constrained, roles. With too much freedom, players might be tempted to hang up the badge or shimmy out of their shackles. Games often require that players stay in their place, bound to roles and expectant of particular interactions.

While many stories pose a symmetry between police and prisoners, some games treat those roles as functionally identical. That’s arguably the situation in both the recently-released Astral Chain and the somewhat older Freedom Wars. Both games are set in post-apocalyptic, anime-styled futures whose stories alternate settings between a relatively peaceful headquarters and fields for combat. Both games provide narrative justifications for why players can only go to the field in limited ways, as well as for why players can only perform certain kinds of actions once they’re out there. And both games imprison their main player characters. A prominent difference is that Freedom Wars is overt about this incarceration from the start, while Astral Chain only imprisons its main character briefly, in the middle of its story. Or, that is, Astral Chain only overtly has its main character in a jail cell for a few short minutes of screen time.

Before and after their short spell in one of the few jail cells in their high-tech HQ, the life of the main character of Astral Chain, Officer Howard, doesn’t change much. They get a mission briefing, are able to run around headquarters chatting with other cops and squad members and then depart to a neighborhood that is facing an interdimensional threat. That might make a mid-game prison segment seem like it’s without consequence, but that lack of consequence is what makes it so interesting. If there’s no difference between Officer Howard’s life when they have their freedom and when they’re imprisoned, what difference is there between being a cop and being a prisoner? 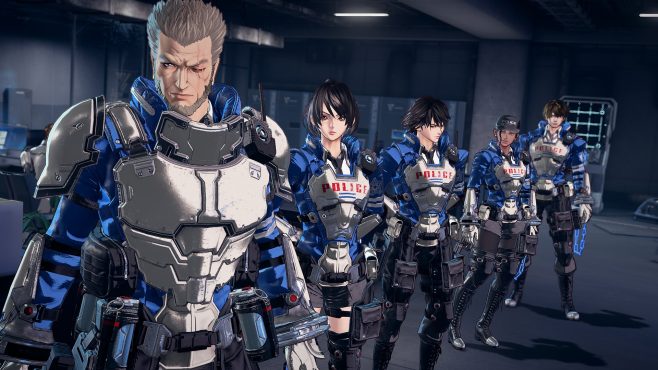 If being a cop and being a prisoner are the same, that requires that everything around those two roles be the same: the spaces a character inhabits, the conversations they have, the tasks they must do, the permissions they possess and the restrictions they must follow. That’s a lot of complexity to lock down and control. The more someone is free to move, to explore, to communicate with people with different kinds of lives and positions, the more difficult it is to exercise that kind of control. To control all those factors, one would need, well, total control. Sociologists have a classic concept for parts of society that do this, namely, “total institutions.”

As originally coined by Erving Goffman, total institutions are organizations in which many human needs, for a whole group of people, are kept under bureaucratic control. Examples can include orphanages, asylums, prisons, army barracks, work camps, or monasteries. If you’re into academic literature, you could check out Goffman’s Asylums or his essay, “Characteristics of Total Institutions,” for more details. Like many social concepts, total institutions don’t exactly have a single, defining feature. Instead, total institutions are identified by what qualities are shared between a range of similar organizations and places. For example, imagine living in a surveillance state. If you’re monitored everywhere that you go, and every interaction you take is recorded, and that monitoring has real consequences on what you’re allowed to do, then maybe working in an ice cream shop is similar to exile to a state-controlled farm. The main differences are in what you are allowed to do and how many options you have available.

Don Everhart is a sociologist who thinks games are good to think with, especially when it comes to how they refract culture and society.

You’ve been reading an excerpt from Unwinnable Monthly Issue 127.

Little Boots to Fill – An Excerpt from Unwinnable Monthly 91

The Sound of Protest (And What Happens if TikTok Disables it)