The only time you see the letters “GTFO” in the videogame GTFO is when you’re hankerin’ to get the fuck out. Other than the quit button, the in-game branding is non-existent — no title screen, no tutorial, no cheeky quips or extra little nod in the hacked terminals. After loading in, you load up and then the squad is dropped down in it.

GTFO is about escaping a mutant-filled industrial hellscape, and it’s not looking to go out of its way to prepare the player. They’re leaving that up to teamwork, the only source of information for players new and experienced. This isn’t a matter of learning the particular lessons of the game, which offer a lot of tools but otherwise stick to the fundamentals established by other co-op survival shooters like Left 4 Dead 2. There’s your standard running and gunning, health packs and pipe-swinging, and easily-spooked glowing monsters, but instead of wandering through the American post-apocalypse here you are scouring a rugged Alien-esque space derelict where things clearly went awry.

The devs here are relying on an audience thirsty for a gnarlier experience. Even though you’re armed, firefights rarely go in the player’s favor, and even when you pull through, the defeated don’t leave anything of real value behind. As such, GTFO wants you to go slow and quiet, gathering intelligence on your surroundings, drawing up a plan and executing it with clarity and some quick swings of your future-pipe.

Communication between members of a full crew is more essential than frosty sights, though only by a fraction. Each player carries a specialized tool to help either prepare for swarms or mitigate their overwhelming mass, and each must be used to their full extent. Eventually in each run there’s a security door that requires players to stand in specific spots for a certain amount of time in order to end the onslaught and move forward, which is of course complicated by a flood of bullet-resistant sacks of malice. 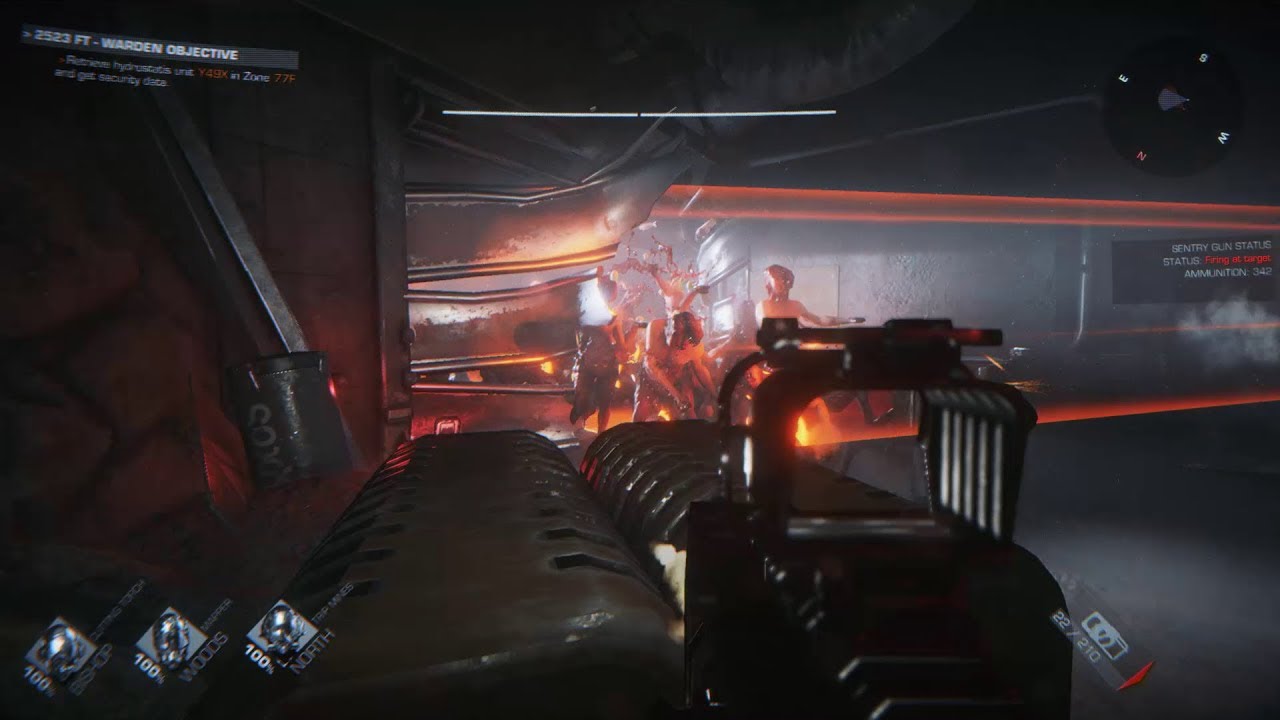 This is all by design, particularly as the developers of GTFO (which includes former Payday 2 members, hence the heist-oriented motivation) are partnering with a new player in the fight for gamer comms preferences, Overtone. The details are still forthcoming, but the team-up makes a lot of sense. While I do wish there was something of an Apex: Legends-like ping system to fall back on, for the most party everyone needs to get locked in step to clear each room with a clear methodology. Lone wolves can keep to the woods, in the world of GTFO, the devs are demanding a lot from every player, where even the most inexperienced needs to carry some water otherwise the whole team goes down.

It’s a brutal, unforgiving, and niche experience. But having worked with this aim from the start, the developers have cleaved the fat from the bone, and built in a lot of tension and atmosphere through which you must wade in order to succeed. The only little dalliance is the hunt for information. There’s no minimap, and while your goals are outlined from the beginning making it to the cargo in question is a big open question. By hacking terminals with a very query-and-response interface, you can dig up the relevant whereabouts of randomly dropped pickups as well as the keys and locations of your quarry. The monsters between you and there start with silent peons and the aforementioned swarms, as well as those with spidery tendrils and more intense horrors.

So you’ll fail, a lot. As per the last rundown, a series of levels that may never be available again, only a single-digit percentage of players made it all the way to the end. But even in death a strong effort can feel like a kind of success, an education towards more effective strategies for the next round.  There are always more prisoners or drones or whatever it is you’re occupying, and though the maps are static the spawns are randomized, so no two dashes through are the same.

GTFO is a mean game that’s hard to recommend out of hand, particularly if you prefer to be quiet on mic or stick to your own devices. It’s also working really hard to force a meticulous playstyle, to get away from arcade-style madness, and put a group of friends through a multi-player haunted house that you must absolutely fight back in. GTFO is a singular experience, and though it’s still in early access, there’s already a lot of spit and shine here. You should consider getting the band back together to creep through some foggy hallways for a little light hacking and space SWAT strategy.

The Ethics of a Human Whopper

Omno: In Search of Awe