“I want to do a perception check on that guard’s butt.” Of course, with any check comes a roll, but Joan the Goliath landed in the single digits, so I had to obscure that chiseled ass this time. Joan made certain that the best butts were going to be perceived as we forged ahead, though.

Curse of Strahd doesn’t have much in the way of derriere stats and descriptions, but therein lies the freedom of the Dungeon/Game Master. I knew my players fairly well by this point, so surprise cheek checks wasn’t a total surprise, even if I hadn’t gone out of my way to prepare extensive notes. But it was my duty to wind around their own instincts and desires, from peach-emojis to dark pacts, and I was delighted to do so.

This small group of three players and myself wanted something spooky for our next go-round, and our regular DM was thirsty for some blood to be spilled on the other side of the screen. I’d never actually ran a game before, but I have taught poetry to children in a variety of grades and interest levels, which forges an improvisational instinct when facing off against a gabby and energetic horde. Not that my players were unruly children, at least, not in any strict or rude estimation.

The unvarnished truth is that, while I’d read plenty of Dungeons & Dragons-adjacent novels and ephemera throughout my life, I’d never had a steady seat at the table until the past few years. My young role-playing days were a beachfront of alternating energy and inertia, high schoolers with a mid-twenties leader who, if he could get his shit together enough to organize a campaign, probably wouldn’t have been hanging around kids a decade his junior. There was the almost-DM who usually just fell asleep with his eyes open, the toy hoarder who never met a vacuum he didn’t hate, and the scumbag who stole enough Magic cards to convince the local hobby shop to give up the good fight. 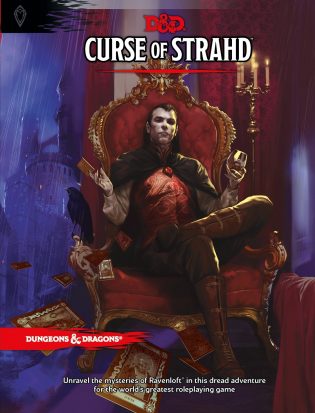 So my current gaggle was a gift of golden charms, apt and enthusiastic schedulers eager to get gothic last autumn. We settled into Strahd like premier television, ready for a few seasons of oppressive gloom and witchy voices. Like any good team we germinated our own in-jokes, spun the critical fails and hits into ludicrous narratives and sprinkled our own spices over the fine-tuned blights and tombs of Barovia. They crafted character motivation that I was able to braid with the established narrative, chasing lovers and crushing hated werewolves and mostly trying to do the right thing until those dark gifts became too tempting for some.

One of the strangest thrills was having unfettered access to the printed world as well, and doling out only what the characters might naturally discover. There’s so much to the book that they didn’t get to taste, whether by out-of-favor rolls, a desire on both sides to move the damn thing along, or just the centuries of flavor penned for Strahd and his purgatory-damned minions. We built this story as a family, but unless they crack a copy for themselves they’ll never know the world like I do. Hopefully I added only the most luscious sauces to the whole dish.

Being so far removed from the D&D and DMing experience in general, it was fantastic to have some misconceptions of the practice shattered, such as 1) running modules doesn’t have to be an on-the-rails experience and is often best enjoyed when bucking the tracks and 2) these things can and should end. It was sad to say goodbye but amazing to allow retribution against trauma-inducing brooms, one last Shania Twain victory song for the ages and to recast Ireena as a damsel of agency in her own vengeance that the party could back up. Even a few mysteries were left delectably unstitched, like what happened to one-time-ally-turned-Lich Victor, but I did my best to provide a sweeping montage of the various friends and foes the team had come across in their overcast travels, and it felt right and final and sad the way a good show should when it wraps.

All of this is to say that you should be a Dungeon Master sometime, if you haven’t already. Aim to finish, toss ‘em a few taut asses, and let the madness creep in throughout.

The Blackout Club and the Perils of Being Seen
Previous Post