This column is reprinted from Unwinnable Monthly #126. If you like what you see, grab the magazine for less than ten dollars, or subscribe and get all future magazines for half price.

It was Broforce that killed my laptop, not me. I’d never wanted to be a speedrunner. I’d appreciated the occasional Games Done Quick, enjoyed the odd race between Super Mario Maker 2 speedrunners, even daydreamed about the cyber adulation that I’d get with a super-fast play-through of the PS1 classic Urban Chaos. It was nothing that was going to coalesce into me actually dedicating my spare time to playing the same game over and over again for no other reason than to see how fast I could get through it.

But I’d been cultivating a low-level dependency on Broforce for a couple of years. I’d completed it in every way I could dream up and still I was playing it, still chasing a chemical hit that was no longer attainable, hadn’t been for maybe half a year.

What follows is a version of the story, heavily edited from my notes, of how that happened. 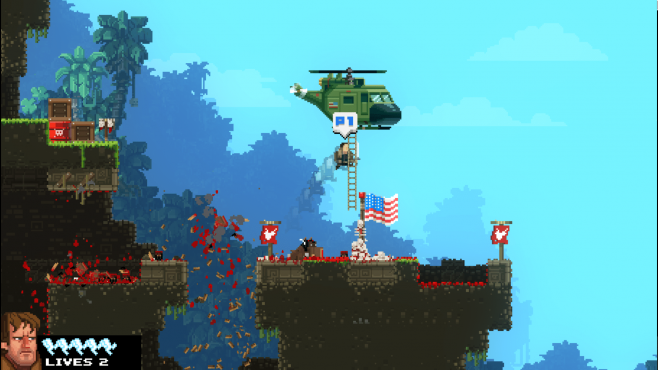 Normally, speedrunning means playing a videogame (or part of one) as quickly as possible, most often using unusual techniques, tricks and glitches to skip whole parts of it. Speedrunners have finished Super Mario 64 in 6 minutes and 36 seconds; Fallout 3 in 14 minutes and 25 seconds; Final Fantasy VII in, err, 7 hours, 11 minutes and 30 seconds. What can I say? Not all games are that easy to speed up.

In the case of Broforce, speedrunning means scuttling a collection of ’80s-action-flick-inspired characters (among them Rambro, Brommando, Ellen Ripbro, Tank Bro and Brobocop) through increasingly hectic and destructible pixel-art platform levels, while throwing a few digs at American imperialism along the way.

Fuck. I think I’m going to need to watch some YouTube videos to figure out how to do this.

It doesn’t matter though. For the moment, it feels great. Welcome back, Purpose and Goals and Drive. I’d missed you.

Best time: Hey, Bros don’t rush Bros, not even when they’re speedrunning. I’m still practicing and learning the routes. Rome wasn’t blown up in a day. 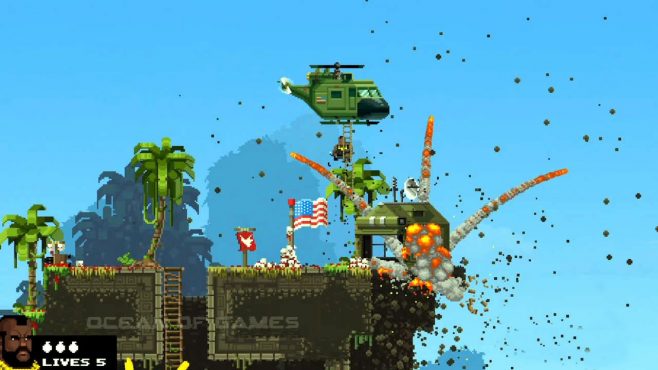 Nervous energy courses through my system. My fingers are shaking with it, making parkouring up this game’s darned ledges even more of a nightmare.

The world record for Broforce’s Arcade Mode on PC is 35 minutes, 42 seconds. It’s held by a kind-voiced Brazilian called Hudsony9. Frankly, I’m not sure I want to depose Hudsony9 from his throne, especially after watching his tutorial videos on speedrun.com (the speedrunning community’s main site for hosting leaderboards, as far as I can tell). Luckily, he’s pretty good at Broforce, so that’s not likely ever to be a serious problem for me.

Obviously everyone who has speedrun the game is a personal hero of mine, but there is a big difference between the top of the leaderboard and even Maejin and Brennfau, whose very respectable efforts put them at joint number 10. There’s over 10 minutes difference, in fact, which is a lot for such a short game.

Having watched some of the guides and past runs, Broforce continues to feel like a good choice, both for dedicating so much of my life to and as my first speedrun. The game has a richness of mechanics that isn’t clear from the first few plays or even from the first forty, elevated further by the disparate tactics demanded by each of the (randomly assigned) player characters and the arbitrary placement of enemies and objects within levels. At a basic level, there’s a consistency to the levels that makes them fun to learn alongside a volatility that demands a quick-thinking elastic mind. Plus, Broforce’s speedrunning community isn’t huge, so I can nurture hopes of making an impact on the leaderboard, and there are enough active, quality speedrunners to make it still a worthwhile challenge. The world record was set just a month ago at the time of writing.

There’s so much to remember from Hudsony9’s videos and the other speedrunners’ routes that I’ve had to write down notes for each level. Otherwise everything would be chaos.

Speaking with a lifetime’s misplaced self-confidence and without any evidence whatsoever of how well I play Broforce compared to any other human person, I reckon I can break the top twenty by the end of the week.

Best time: I’d rather not say.

Oh hello my old friend. Back so soon? That black screen with those two words written large across it is a constant companion. 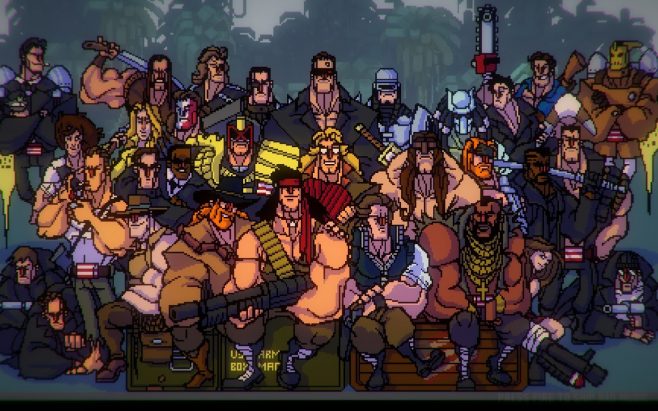 It was Rambro this time. Normally it’s Brolander who gets me screaming at my laptop about how he’s a sluggish sack of fake-Scottish shite after he’s accidentally destroyed a bridge and fallen off the bottom of the screen. God he makes me so angry. This time it was Rambro that let me down, hesitating for 4 milliseconds in front of an attack dog and getting deservedly gouged to death.

I never wanted to be a speedrunner, really.

I’ve started to record the game and my times using OBS and LiveSplit, streaming and recording software that are something like the standards among speedrunners. When the whole rig is going, my laptop gets unusually hot. It was already struggling with a power issue before all this, and the speedrunning isn’t helping. I’ve blown the dust out with compressed air. Maybe that’ll alleviate some of the burden.

My biggest issue at this point (besides my lack of manual dexterity) is that everything remains chaos. I can’t read my notes fast enough for them to be useful, so I have to stop for a couple of seconds at the start of each level to check what I need to know. “Run right fast” isn’t so difficult to parse when I’m in a hurry, but “Pig boost: get onto the rooves [sic], boost until you see the big triangular tree in the sky” isn’t so easy, especially when that’s only one possible route through the level.

I’m getting closer though. Good enough for 22nd in the world with lots of areas I can improve in.

Best time: Still over an hour.

My fingers are trembling when they’re not on my keyboard’s arrow keys. All I want is another quick go. I know I can get consistent on the tank boost on level 9 if I just have a few more goes.

More than that, I need to practice using OBS and LiveSplit. The latter one, especially. LiveSplit is a timer for speedrunners to record how fast they do each segment of a game, which is useful for tracking improvements over specific sections. I definitely don’t think I’m starting or stopping that timer at the right place at any point in the game. Pro speedrunners apparently hit a separate pedal with their foot when they finish a segment. I think they must use an extra screen as well – at the moment, the timer is taking up part of my laptop’s screen, overlaid on top of the game and only not getting in the way when I hide it in a corner, which defeats most of the point of LiveSplit in the first place.

I’ve found a link to the Broforce speedrunning community’s Discord on speedrun.com. It’s no doubt an invaluable source of pointers and moral support. But what if Hudsony9 isn’t the warmhearted gent I’ve built him up to be? They say never meet your heroes.

I’ve done it though. The video didn’t record properly but I’m pretty sure my last run would have put me in the top 20. 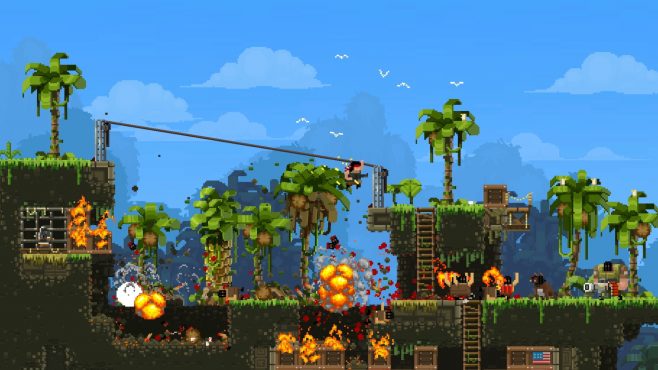 Bleeding heck. How do I sweat so much through my palms when every other part of my body is bone dry? I think my palms are going to wear their way through my laptop’s case before I finish with this game. I still had a bpm over 120 half an hour after finishing up today. I was still trying to speedrun washing the dishes another thirty minutes on from that.

I’m getting the hang of things now. I need my notes less and less. They’re more just a reminder of how the level starts, and, in my best moments, things just flow from there. I still die a lot, sometimes because of some random element of the game, though more often than not it’s just because I’ve panicked.

When I post my best time on speedrun.com, I’m going to need an ace speedrunner name, and that’s occupying as much of my time now as playing the game is. The harder the name is to pronounce the better. Extra points for abusing centuries-old systems of capitalization and the indiscriminate placement of numbers. My best effort so far is deS1struxor, but it doesn’t feel very me. More like a late 90s webcomic villain.

My laptop has started to shut down at random mid-speedrun. It might be the battery. I ordered a replacement for the machine several weeks before the Coronavirus pandemic started. It has not arrived yet. I do not expect it to arrive any time soon. I am seriously concerned for the health of my laptop.

I do not want to stop playing Broforce.

My laptop is dead.

It switched off 13 minutes into a blazingly fast run, and it won’t switch back on again. I guess it was just too scorching hot for modern technology to handle, though maybe the load of the game, OBS and my boiling, boiling hands pushed it over the ledge.

And I still don’t have a good screen name. U3banChao3FanNo1?

My laptop has not recovered. It might be dead for good.

It was Broforce that did it. Damn you Broforce! Though I don’t mean that. I could never stay mad at you Broforce.

I suppose I have made top 20, which was my goal, but now I want more. I can make the top 10. I will make the top 10. Whenever I have a functioning laptop again, I’m coming back to crush you Maejin and Brennfau and, yes, maybe even you Hudsony9, no matter how gentle and beautiful your soul is. Or at least I’m coming to get a bit nearer to you all on the leaderboard.

In the meantime, maybe I’ll go chat to the Broforce community on Discord. I did join in the end, and they’re great, if you want to have a go at speedrunning the game yourself. Then I should get the (horribly recorded) video of my triumph off my broken computer’s hard drive and post it on speedrun.com under my new screen name specTAGGular.

Probably I’ll just play Broforce some more on the Switch instead.

Declan Taggart wrote a short, free word game about Vikings and the end of the world. For your own good, he recommends you play it (over here) and then go and complain to him about it on Twitter @DCTaggart.