Take some time to explore Toussaint in The Witcher 3 and you’ll come across an imposing palace. You can’t possibly miss it. The structure is located in Beauclair, but you can see it from almost anywhere in Toussaint.

This building is known as Beauclair Palace. Climbing up into the clouds, it looms large over the surrounding city, but the structure dominates the landscape as well. Size isn’t the only thing which makes it appear so imposing, though. The construction materials, for example, are clearly of the highest quality. The design definitely isn’t lacking, either. In terms of decoration, Beauclair Palace also happens to be the most beautiful building in Toussaint.

These features give Beauclair Palace a particular type of presence. They give it a genius loci.

The term genius loci refers to the feeling or sensation that a structure inspires. (While it literally means “the spirit of a place” in Latin, the term is almost always left untranslated). This is mostly created through context. In other words, buildings can’t be considered in complete isolation. They have to be situated within their surroundings. Christian Norberg-Schulz describes in Genius Loci: Towards a Phenomenology of Architecture how structures are given meaning by their “being-in-the-world.” He points out that people “visualize” and “complement” nature by recreating and perfecting what they see in their environment. This results in them “symbolizing” their understanding of how the world works in the form of a structure. In this way, buildings represent an “imago mundi or microcosmos” which reflects how people perceive their relationship to the planet. This forms their genius loci.

What exactly is the genius loci of Beauclair Palace? You could safely say that it’s all about domination. The structure communicates a strong sense of supremacy. This can be seen by its size, but the construction materials, design and decoration convey the same concept.

Toussaint is far from flat. Beauclair sits on a broad plain, but it was built at the bottom of a deep depression. The city is bordered by mountains on every side. (Borrowing two terms from German, geologists technically refer to this type of terrain as horst and graben). With its tall towers and soaring spires, Beauclair Palace provides a perfect reflection of this landscape. Standing at the top of a hill, the structure dominates the surrounding plain, competing with Mount Gorgon for pride of place among the clouds. It lays claim to everything in the immediate area. In other words, the building “visualizes” the mountain, “complements” the plain, and “symbolizes” the supremacy of people over the world around them.

Something similar can be seen in the use of construction materials. The terrain in Toussaint is mostly covered with trees, but the mountains are pretty solid masses of stone. The same could be said about Beauclair Palace. While the roof seems to be made from wooden rafters and ceramic tile, the rest of the structure is clearly supposed to be made from stone. Take a stroll through its huge halls and you’ll come across nothing but marble and granite. You might say that it “visualizes” the mountains, “complements” the trees, and “symbolizes” the prominent status of people in relation to nature. Taking the best of what Toussaint has to offer when it comes to construction materials, Beauclair Palace represents an assertion of supremacy over the surrounding landscape.

Beauclair Palace was designed around organizational principles like asymmetry, hierarchy and rhythm. With its cavernous keep, the structure is sharply asymmetrical. Since they come in a variety of different sizes, the spires have a clear hierarchy to them, too. The columns which you’ll come across in the arcades provide a strong sense of rhythm. These organizational principles aren’t just found in Beauclair Palace, though. Spend enough time searching for them and you’ll find similar patterns in the surrounding landscape. The structure just makes these patterns particularly apparent by turning them into organizational principles. In this way, the building “visualizes” and “complements” the landscape. The result is that it “symbolizes” the superiority of people over the planet when it comes to the process of design. 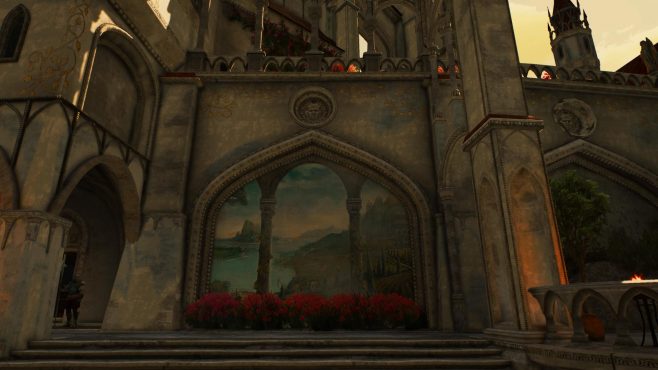 With its flying buttresses and hanging arches, Beauclair Palace is by far the most beautiful building in Toussaint. Similar to the organizational principles which underpin its design, the decoration of Beauclair Palace provides a perfect reflection of the surrounding landscape. The structure appropriates patterns that appear in the landscape and then amplifies them through art and artifice. Toussaint, for example, is filled with flowers. These can be seen throughout Beauclair Palace in the form of a decorative motif. While the ones in the fields come in a variety of different shapes, the ones on the walls are simplified and completely identical, though. Perfecting the patterns that appear in the landscape, the structure “visualizes” and “complements” nature, “symbolizing” the supremacy of people over their environment.

The genius loci of Beauclair Palace is all about domination. The building clearly communicates the superiority of people over nature. This comes through in its size, construction materials, design and decoration. Norberg-Schultz would only explore this aspect of its genius loci, but there’s more surrounding Beauclair Palace than just a landscape. Take a look around the place and you’ll see a city.

Norberg-Schultz focuses on how people perceive their relationship to the world around them, but there’s definitely a sociocultural aspect to the concept of genius loci. Beauclair Palace could be said to “visualize” and “complement” the surrounding city, “symbolizing” the prominent status of some people in relation to others. In this way, the genius loci of Beauclair Palace could be considered in the context of class struggle. Beauclair Palace is bigger than any other building in its immediate area. While most of them consist of waddle and daub, this building seems to have been made from stone. The structure was also designed around organizational principles like asymmetry, hierarchy and rhythm. With its flying buttresses and soaring spires, Beauclair Palace is by far the most beautiful building in Toussaint, too. Recreating and perfecting the surrounding city, the structure presents a particular understanding of how the world works. What exactly is the genius loci of Beauclair Palace, then? Domination.