In Ursula Leguin’s Earthsea books, about a distant archipelago settled by wizards and dragons, one of its principal characters, the wizard Ged, comes to lose his powers. This is a deeply traumatic event, one from which Ged must rebuild, not only in terms of his health but his sense of self, wrapped up as it is in his ability to do magic and to be made more powerful by it. As the witch Moss describes it: “His power’s himself, see . . . When his power goes, he’s gone. Empty.”

Star Wars Jedi: Fallen Order by Respawn Entertainment tells a similar story. The player controls Cal Kestis, a young Jedi who has become disconnected from the Force’s magic due to the trauma of his master’s death at the hands of the empire. Kestis begins the game on a literal trash heap, working at a ship cutting yard, signifying the distance he, and in turn the remains of the formerly prestigious Jedi Order, have fallen from prominence.

From this inciting trauma, the two stories diverge in instructive ways. Where Earthsea focuses on reckoning with loss, Fallen Order opts for immediate action. Kestis joins up with the ex-Jedi Knight Cere Junda who seeks to rebuild the Jedi by finding a list of children around the galaxy who can be trained in the Force. As for Kestis, his primary goal is restoring his magical ability, his connection to the Force. Every time he “meditates” to heal and level up, the ghosted map of his former abilities stretches out before him; a constant reminder of his loss. For Kestis, overcoming the trauma that left him cowering and hidden on a distant junk world means filling up all those holes, essentially regressing to the position he held before the Empire turned against him and his order: the star pupil of a Jedi Knight, aboard an imperial cruiser, drifting through space at the pinnacle of institutional might and power. 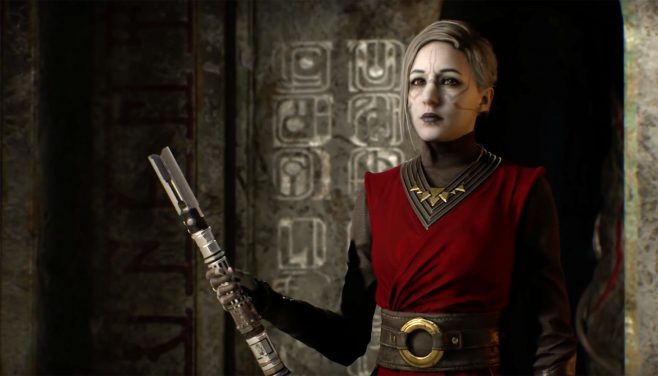 There’s a basic desire to return to the status quo that outlines not only Fallen Order’s skill tree-centric mechanical path, but its emotional core as well. It is a story about an unfair loss and it is a game about dragging oneself back from loss, but it doesn’t really consider what the experience of losing power might teach the person who loses it. Though Cal does not, ultimately, choose to pursue these Force-sensitive children, by the end of the game he is more powerful than he was as a padawan, his personal mission of self-restoration is accomplished, even if the future of the Jedi remains murky. He has taken natural lead of his team made up largely of women and it’s clearly his decision about where they’re headed next.

The shape of his arc adds weight to the argument that Cal Kestis should have been anything but a white male protagonist. When the game’s director Stig Asmussen was asked about choice of protagonist in a Game Informer interview, he replied that “Rey was kind of the thing for Star Wars so it made more sense for us to have a male protagonist.” Beyond the weird logic that only one female hero can exist at a time, choosing a character’s identity necessarily impacts the shape of their story and the ways in which they might realistically interpret the events around them. Casually assigning Kestis’ maleness also means a casual treatment of how that maleness fits into the story being told.

Game designer Sisi Jiang described Campbell’s Hero’s Journey on Twitter as “a power fantasy because cis men are uniquely conditioned to conform to society at all costs” Kestis doesn’t seek change, he doesn’t seek to examine the unequal balance of power which allows the Jedi Order or the Empire to exist. He just wants to be a Jedi, he wants to wield a saber, to make decisions for others, as is his deserved role as a white man in a story told by white men.

To get what he wants, Kestis needs a crew, which means he needs people who are willing to make sacrifices on his behalf. By the end of the game’s tutorial, he conveniently acquires one: Junda and her hired ship captain, Greez Dritus. Kestis later recruits Merrin, a nightsister (space-witch in Star Wars parlance) on the planet Dathomir. The manner of Merrin’s recruitment bears out with Kestis’s assumptive role as the noble patriarch who knows best. Merrin lives in a society utterly decimated by the Empire, and by men. Every other nightsister was wiped out through Imperial genocide and the surviving nightbrothers are enthralled by a twisted male Jedi, Malicos. Kestis assumes, despite the arguably greater trauma that Merrin has suffered, that she should fly out with him and expose herself to the Empire’s watchful gaze. That she should sacrifice her security for Kestis’ growth is a decision made without a second thought, it is simply assumed that she would want to support him the moment she stops being his enemy. 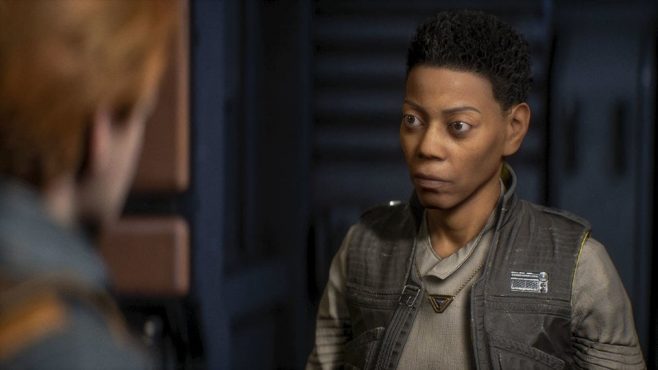 The other woman on his crew is Junda, who’s personal story provides the dark shadow for Kestis’ own innocent boy-scout tragedy. Junda’s trainee, Trilla Suduri, is captured by the Empire and turned into the main villain of the game. She naturally blames Junda and incites Kestis to do the same. That Kestis is so easily able to do so, to turn on her like a wounded puppy, reveals his entitled and blinkered understanding of the world around him. He expects Junda to have immediately revealed to him her most painful truth: that her actions led to the capture and corruption of someone under her care. Kestis only forgives her after she volunteers every last detail of her personal tragedy to him. Meanwhile, he doesn’t even fully grapple with his role in his master’s death until very late in the game. He expects open books of his allies while allowing himself to remain a mystery.

Though Kestis eventually reconciles with Junda, their conflict begs the question of why we consistently settle for narratives that rely on cis white men coming to their senses? Why should we be happy with stories about heroes returning to comforting conformity and the status quo? When Ged loses his power in Earthsea, it doesn’t serve as a momentary disruption in the normal way of things, but as a revolution: “a wrong that cannot be repaired must be transcended,” as his partner Tenar observes. But Fallen Order wraps up with the wrong simply reversed. Kestis’ power and his right to rule are reified. It’s Kestis who talks Junda down from her sense of rage when she confronts those responsible for corrupting her Suduri – treading brazenly into the messy optics of a white man telling a black woman to be less angry – saving her as he does every marginalized woman in the game. And, as the game concludes, it’s Kestis who takes it upon himself to destroy the list of force-sensitive children without any discussion or input from the rest of his crew, many of whom sacrificed a great deal to acquire it.

In the Star Wars universe, the Jedi are considered unambiguously good because they play the role of protectors. They’re there to shield the innocent from the blood-red lightsabers of the Sith with their own angelic blue and green riposts. But protection is also a form of power. Deciding who deserves to be protected is employment of that power. Fallen Order doesn’t question this. Your missions show ample evidence of a destructive, enslaving and brutalizing Imperial footprint, but Kestis only intervenes to the extent that he can achieve his narrow goals. You’re too late to do anything about the sacking of the mining town in Zeffo. You help the wookie rebels of Kashyyyk only as far as necessary to gain access to a hard-to-find location on their planet. You invade Dathomir to steal a device from their sacred temple, murdering countless nightbrothers who are only defending their village. Fallen Order relies on the circular logic that Kestis is noble because he is a Jedi, because he is noble. Meanwhile, the course of his actions reveal a privilege and entitlement that doesn’t feel surprising in a hero who looks like he does.

Fallen Order isn’t interested in building a new world. When Kestis tells the evil Jedi Malicos that he seeks to rebuild the Jedi Order, Malicos balks at the idea. We’re meant to side with Kestis because Malicos’ aims are selfish and miserable. But there is wisdom in questioning whether an unbending desire to return to the status quo is the correct way of going about things. Especially when that desire leaves existing hierarchies and old injustices in place. It might be a path toward a kind of healing, but justice requires the healing of all, requires the recognition and use of one’s privilege for the betterment of others. And in spite of their lofty self-description, this has rarely seemed to be that important to Star Wars’ erstwhile Jedi order.

Alone at the End of the World
Previous Post