In a wrenching scene part way through We the Animals, a film about three brothers growing up in poverty under intemperate parents, the children playfully chase their dad around the house; finally catching up with him, they pin him, along with their mother, underneath their small bodies. Then, suddenly, one of the kids’ soft fist opens into a hard palm, which he slaps against his father’s naked back, the sound echoing into the shocked silence that follows the act. Quickly, his brothers follow suit, and what was once a mock violent interaction becomes suddenly serious, as they wail down with all their strength, exercising their frustration and their anger at their father’s neglect, at his mistreatment of their family.

We the Animals explores how anger, frustration and even violence tend to undergird even the warmest relationships. There are many moments in the film that display the frenzied love that the family bears toward one another layered together with moments where that love explodes into anger and even violence. It succeeds at depicting these emotions as hopelessly intertwined, all tightly woven together. Anger and frustration seem to perpetually swim in the undercurrents of love and affection.

While the Overcooked games are brightly lit, Playmobil-shaped experiences that don’t share an obvious connection with We the Animal’s dark interpersonal themes, the demanding cooperative play that it requires can sometimes surface familiar emotional responses in the friends or lovers who find themselves playing the game together.

Playing Overcooked involves working, sometimes in groups, more often in pairs, as cartoon chefs crafting simplistic recipes on an increasingly tight schedule. As the game progresses in difficulty, zany elements are introduced that make completing that basic task comically difficult, such as shifting stages, randomly occurring fires and rats who steal your ingredients. 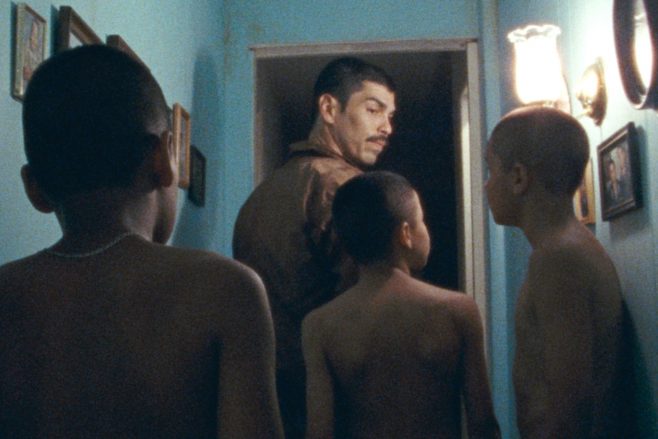 Thanks to its stiffly difficult nature as a war of attrition against time and circumstance, it isn’t odd to hear stressful outbursts during an Overcooked session. Since it’s a game, since it is detached from real life or life’s consequences, it can serve as a useful outlet for couples to scream and shout at each other, to exchange pent-up verbal barbs and generally exhibit behavior that would never fly in the actual kitchen.

After all, hearing a neighbor yelling at their significant other to do the damn dishes because the steak is burning, or groaning in exaggeratedly agonized frustration about missing ingredients or boiling rice, might give pause and even cause for concern. The vile utterances that have escaped my wife’s mouth while playing Overcooked might make one question the steadiness of our marriage.

But this is the point of games like these. Games in general often serve as capacitors for rage and frustration, places to displace the energy that has no place elsewhere in your life. Multiplayer shooters are infamously lousy with adolescent-level tantrums and a raging player-base. Even many single-player platformers seem to take pleasure in teasing and plucking at the frayed nerves of their audience with demonically challenging stage layouts.

There is a uniqueness to Overcooked, however. Unlike the anonymous nastiness of online competition, “couch co-op” games like Overcooked engender a different, more personal form of stress. Ever since the player controlling Luigi could force Mario to fall into open pits through crafty use of the pause menu in Super Mario Bros., cooperative play has always contained a tinge of intimate antagonism. When it comes to a game like Overcooked, where you are so utterly reliant on each other to win, that antagonism lies on a hair trigger.

This mirrors relationships in many ways: As much space as you give one another, as much as you put time into your own hobbies and personal obsessions, you are still ultimately stuck together and reliant on each other for your mutual happiness. Frustration is a natural outcome of cohabitation at this level.

Frustration is a natural outcome of cohabitation at this level.

We the Animals depicts this frustration at its most unhealthy and destructive extreme, including emotional and physical abuse, which are inexcusable. Yet the broad contours of its depictions should bear passing familiarity to anyone who is currently, or ever has been in a long-term relationship. It is infinitely rare to find two humans who exist in perfect symmetry. Relationships, rather, are about navigating the craggy outlines of our asymmetries, about recognizing that there’s something at the core worth struggling for.

In Overcooked, no matter how much my wife and I yell and snap and gasp in frustration and overblown impatience, when we hit those three-star victories, the slate is instantly cleared away. It’s an exhilarating dalliance, teetering on that line, playing at fighting while avoiding the real thing. The game reminds us that those emotions exist within us, that they’ll always be attached to us, no matter how deeply we care for each other. Keeping them siloed in a mostly harmless digital exchange is a way for us to recognize that fact, and to observe it, without being destroyed by it.

Overcooked, We the Animals

Life is Strange 2 works to deconstruct the series‘ power fantasy