Anyone who collects toys (though this isn’t exclusive to toys, really) will tell you that sometimes, for whatever reason, they’ll get a thing and end up being disappointed. Mulling over a box in the store for more time than is probably necessary; looking up info online; checking out videos; every so often, no matter how meticulous they are they’ll end up with a toy that just doesn’t do it for them once it’s in hand. Here’s the thing: while there will be times when you just have to eat the loss and get rid of the thing for way less than you paid for it, sometimes you can turn things around and turn that dud into something great. All you have to do is, well, “do it wrong.”

There are so, so many things I missed out on during my extended transforming robot toy collecting hiatus – entire toy lines, reproduction decal manufacturers, unofficial but high-quality homages, etc – and “Fan Modes” is definitely a big one. My lack of knowledge could be chalked up to me being a child at the time, or the general simplicity of the toys back then not offering many ways to go off script, but regardless, now that I know it’s a thing I kind of can’t believe I lived without it for so long. 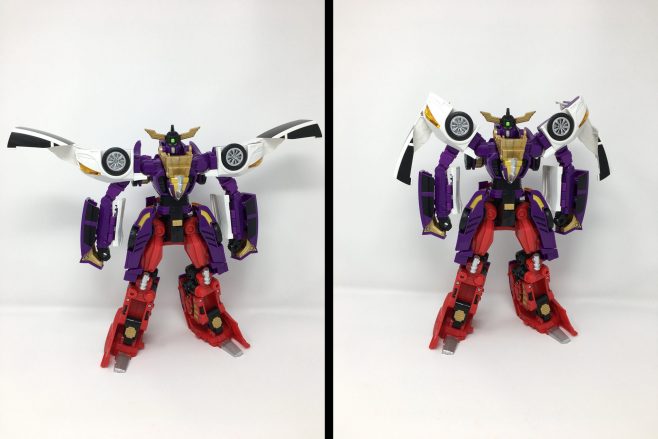 In a nutshell, fan modes are exactly what they sound like: you mess around with a figure’s engineering in order to alter its appearance in a way that doesn’t conform to the “correct” pattern. This can be something as simple as angling multi-jointed shoulders differently in order to dramatically change a figure’s silhouette, or something as complex as arranging two figures in such a way that they’re awkwardly clinging to each other in a very specific way in order to create an unintended combined form. The more moving parts the better, as that means more potential for mixing things up.

This probably sounds like a dumb (and maybe obvious?) thing but to me it was a very pleasant surprise. Sometimes doing things “wrong” just looks better, and I don’t just mean because Hasbro’s product photography usually makes their Transformers look terrible. In fact, there’s more than one figure I have in my collection right now that was saved because of a fan mode. It’s wild, I know, but look at some of the Transformers Energon Powerlinx/Powerlink toys with their tons of kibbly bits that hang off in shirt or pants mode (this is a real thing, honest). A little creative repositioning can turn a jumbled mess into wings, artillery backpacks, additional arms to hold weapons, and so much more. And since it’s entirely based on one’s own creativity and preferences there are often a number of ways to personalize something. 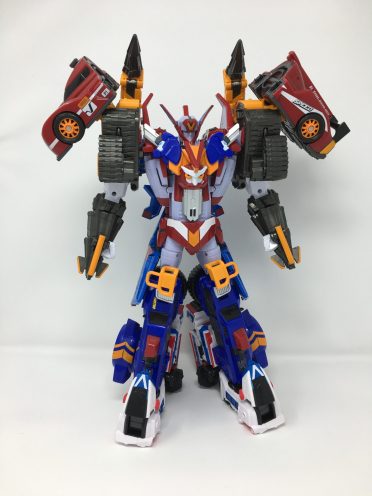 I won’t get into it too much but to cite just one specific example, let’s look at the Tobot V Master V combiner – from a series of transforming robot toys out of Korea, produced by Young Toys, and based on a CGI cartoon. The figure looks pretty decent before combining with the three others that are meant to be worn like platform shoes, shoulder pads, and let’s be honest just a backpack. Merging with everyone else creates a sort of messy but also kind of glorious (?) . . . thing that I thought looked good in photos but wasn’t really excited about when it was standing on my shelf (next to the much cooler Tobot V Big Troll, no less).

I had plans to sell the whole set off despite the pretty big loss I would have to take due to a significant drop in eBay prices, but as I was taking photos for the impending listing I decided to try something. Could the ends of the train-shoes move freely in combined mode? And if so, what would it look like if I spun them 180 degrees and tilted them up so that they appeared to wrap around the robot foot rather than simply sit below it? What if I repositioned the wheels on the upper parts of the legs? Can I do anything with the utterly pitiful wing backpack to make it, you know, actually visible from the front so its existence would actually matter? After some playing around (Imagine that, playing with toys!) I not only discovered an unofficial configuration that I thought looked significantly better, but it completely turned me around on the figure. I went from disappointment and plans to sell to excitement and a desire to prominently display it in a matter of minutes.

Fan modes aren’t a magic cure-all or anything like that – I’ve still encountered plenty of toys that either weren’t engineered in fan mode-friendly ways or that just didn’t change my mind with some adjustments – but they can make a much bigger difference than I’d ever thought possible. You don’t any extra materials, tools or paints. Unlike third party “upgrade kits,” it doesn’t require any additional purchases. It encourages creativity with freedom. Sometimes “wrong” is what feels the most right.