When the topic of game preservation is discussed, our thought too often float towards the cream of the crop – the classics and hidden gems alike. But that’s not all there is to game history. It’s full of half-formed ideas, bold experiments and just plain bad games that nonetheless remain interesting in their failures. Just look at Ninja Warriors, now making a comeback with the modern remake The Ninja Saviors: Return of the Warriors, as an example of this phenomenon. Taken as a whole, Saviors proves to be nothing special, and indeed, many of its ideas absolutely don’t work. But the process it took to get there is interesting and noteworthy, and that alone is worth enshrining in the annals of game history, even if it only proves to be a footnote.

Ninja Saviors is a beat-em-up with a bit of a twist: You don’t have full range of movement within your 2D perspective, as you would in a Double Dragon or Streets of Rage. All the action takes place on one plane as you utilize three different characters to fight your way through the levels. This requires some different thinking on the player’s part, as avoiding enemy attacks becomes more about jumping out of the way than it is about positioning. This also makes the few environmental hazards that populate the levels harder to avoid, as there’s fewer safe spaces to occupy. And since there’s less room to work with, fights can become cramped in a hurry.

In practice, though, Ninja Saviors proves to be a thoroughly pedestrian affair mostly due to how limiting its strictly 2D range of movement truly is. Damage often comes off as cheap shots because there’s very little room to dodge things, and the levels are littered with more enemies than the normal brawler because Ninja Saviors throws out foot soldiers that go down in one hit. Beyond that, though, the limited moveset of your characters never truly shines because of how much smaller the potential for interactivity is. It turns out that those extra planes of movement in other brawlers matter a lot. Beyond that, two of the main three characters they feel plodding compared to the responsive Kamaitachi. The ideas at work are interesting, but the game just isn’t that fun to play. 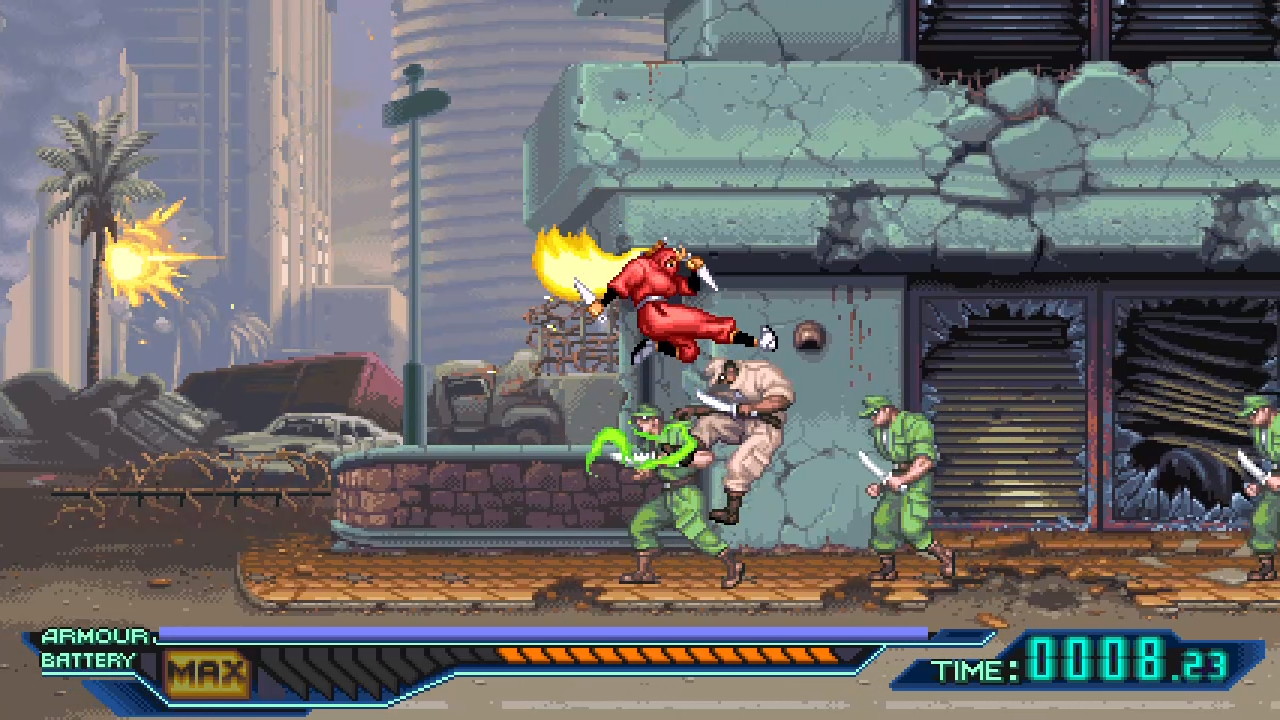 The game, however, remains interesting, and does some things very right. The graphics and animations are expressive in a way that’s very much in the spirit of the SNES library where the game was birthed. The music is another high point, another jam by Taito house band Zuntata in a career full of them. But even if Ninja Saviors didn’t offer these redeeming qualities, the game can and should be remembered for the ideas that make it unique, even if they end up being a failure. It’s all a piece of games history, and who knows, maybe some designer from today will take the ideas in Ninja Saviors and turn them into something good.

But let’s not go assigning value to games because they’re considered good or that they inspire better ones. A game doesn’t have to be “good” to have value, or even be “useful.” Art doesn’t care about how someone finds value in it, just that it provides the people experiencing it the opportunity to see their own version of value in a work. Every piece of art speaks to someone and that alone makes it worthy to be enshrined in game history and remembered as a part of it. Perhaps it’s just a footnote, but that means it exists already in it, and thus deserves to be preserved. The Ninja Saviors release does just that beautifully, preserving everything about the original while enhancing the graphics and adding gameplay elements that keeps the spirit of the original release alive in two new playable characters.

It’s true that Ninja Warriors wasn’t really that great of a game, but that doesn’t matter. It had good points, its failures are interesting, but even if all that weren’t true, it’s still part of game history and thus worthy of being remembered. Game preservation is about keeping the history of our medium alive, and if pieces of art are receptacles in which the potential for value can be found through the lens of their audiences, then it’s up to the industry to step up and keep these sparks of potential burning for generations to come.

The Ancestors of the Children of Morta