Families exist in a Nile-wide spectrum of quality. As much is obvious just from our current political climate, as this country is ransacked from the top down by a bilious mob-boss understudy and his slime-sucking spawn, and whether it’s love, self-preservation, non-disclosure agreements or a cloudy blend of them all, they’ve stuck together so far. Which is more than can be said for some families that exist merely on a genetic level, threaded with generational biology and little else, displaced through personal or national cruelty. And there are those who lucked out with siblings, parents and extended relations they can count on for support, understanding, emotional resilience and more via a net of common decency woven with hands that lift up rather than tear down.

Most of us are the result of a chunky blend of all the above, with hopefully a more positive proportion of people we can depend on and stand up for. Developers Dead Mage have assembled a family that leans more positive on the familial scale and dropped them into a colorfully chunky world of procedurally generated hacking and slashing. The Bergsons of Children of Morta are not without fault, as players learn between sessions of slaying a contagion of ichor-drenched abominations (and trolls and spiders and skeletons, etc.) running rampant across the holy mountain they are sworn to protect. Children run off, uncles linger a little too long with the bottle, trust is tested and strained. Of course, they still squad up one by one, because without them you wouldn’t have as many playable characters, which would defeat the point.

The Bergson family, and the piecemeal narrative which binds them throughout, is primarily what sets Children of Morta away from its peers and influences. Exposition is delivered by an omniscient voice, warm as oven-fresh bread, keeping the player up to date on each family member’s motivations and inner-thoughts without going overboard. This carries shades of Bastion, the standard-bearer for interstitial adventure-game storytelling, though Children of Morta doesn’t go nearly as meta. While carried with a lovely affectation, I’m still left wishing I could hammer a “next” button as I can read faster than the gentleman can speak and am eager to carry on. Further detail is provided by library entries found or earned while playing, that the player can read-up on for more contextual world-building as per their desire. 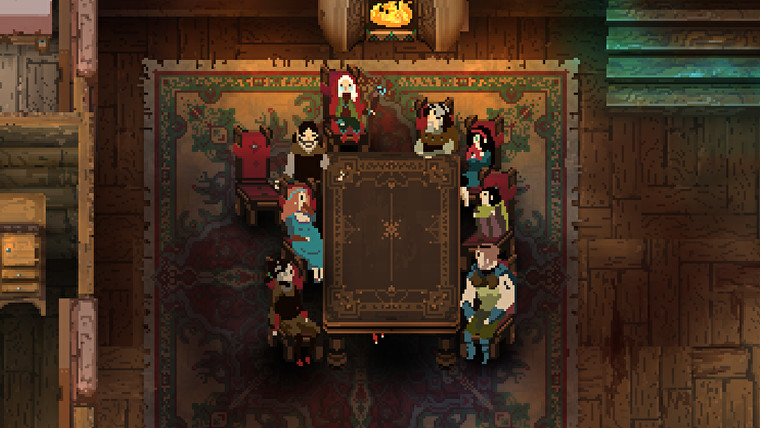 None of it is really surprising, as the framing follows a similar path through as other epics: a kindly and wise grandmother, bull-chested and sword-singing father, rebellious elder son who returns and his younger brother who bears a similar flame of desperation to prove himself, a steadfast bow-slinging daughter that embodies dependability, and more. It’s not too far off from the scaffolding of The Righteous Gemstones, though that family definitely runs blue and is much more prone to self-sabotage. But there are always prodigal sons, wayward siblings, a common enemy or problem that musters everyone involved to at least temporarily sheathe their petty concerns for the greater interest.

The rest of the game is well-built, if not ground-breaking. Not every title needs to be, but I can’t help see the stitching between inspirations – Diablo and Gauntlet sewed together with Dead Cells and other luminaries of the pixel renaissance with the aforementioned Bastion setting the scene. The combat is smooth, with interleaved skill trees encouraging the use of multiple family members so as to foster bigger gains beyond mainlining a single Bergson. Each fighter’s style works well enough alone, but there is room for a second player to assist, even though I always felt capable of solving the mystery of these mountainous invaders solo.

Children of Morta plays fine and has some fantastical charms and familial knots to unwind as you toss out run after run. But I don’t feel that same hunger to keep wandering that this game’s references inspired, despite the mini-sode drip of story that is more compelling than the way other Rogue-lites drop a dollop of plot at the start and then just let the player roll on and on. Maybe a regular couch sidekick would help, or some more direct engagement with the characters outside of the narrator explaining everything. Because despite a teeming world and so many siblings and elders, Children of Morta is mostly fine, but not a centuries-old dynasty worthy of widespread veneration.