Lack of competition has made sports videogames boring. Thanks to restrictive licensing deals, Madden and MLB: The Show are the only meaningful football and baseball console franchises. Konami’s Pro Evolution Soccer doesn’t feature as many real-world teams or player likenesses as FIFA for the same reason. There hasn’t been a serious hockey series to compete with EA’s NHL series since NHL 2K was discontinued after the 2011 season. That leaves NBA 2K and NBA Live’s fight for fake basketball domination as the last major sport in America with two competitive series squaring off each year on equal footing, even if NBA 2K’s one-sided control of the market leaves NBA Live as an overlooked also-ran.

It cannot be overstated exactly how bad NBA 2K has beaten NBA Live over the past two decades. So, when NBA Live 19 flashed promise as a legitimate contender last year, of course that’s the game I decided to buy between the two. I’m always down to back a scrappy underdog and it’s $20 holiday price tag was enough to warrant giving it a shot. Backing underdogs often means being on the losing side though, and as of this writing, it’s uncertain when or whether NBA Live 20 might get released. The fact that I feel slightly disappointed about this begs two questions: why do people love to back longshots against impossible odds and how soon should we move on when one side comes up short? 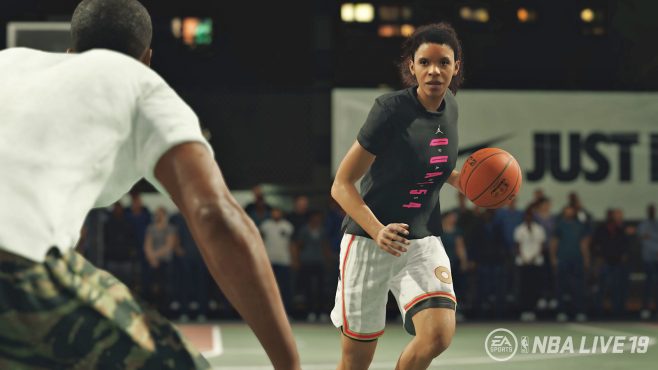 Let’s start this exploration with some numbers. While 2K has sold over 90 million copies since its first installment launched on the Sega Dreamcast in 1999, NBA Live 19 appears to have sold less than 100,000 copies combined on PS4 and Xbox One, and the franchise has taken a year off more than once (including a failed rebranding attempt where NBA Elite 11 was canceled after shipping to stores). That sad legacy leads us to the present moment. By the time this column is published, NBA 2K20 will have hit its Sept. 6 release date, backed by a massive marketing budget and years of first place momentum. Live may or may not be a no-show, since EA recently pushed back its release date from Q3 to Q4 2019. It could be out in time for the NBA’s regular season tipoff on Oct. 4, but that feels unlikely.

This is made more disappointing because NBA Live 19 was praised for offering a viable alternative to NBA 2K for the first time in years (even if reviews were lukewarm overall). It has an active Reddit community where developers listen to players, introduced a compelling single-player mode and added WNBA teams one year before NBA 2K (and without so much sexist backlash, although that might be because hardly anyone was paying attention). Meanwhile, the latest launch trailer for NBA 2K20 literally features a slot machine-based loot box mechanism. This dropped not long after developer Visual Concepts told officials in Belgium and the Netherlands that their game didn’t feature gambling. Just imagine how it’d feel to be that arrogant.

Those all sounded like rational reasons to pick the vastly less popular option. Doing so also felt like a small way to vote with my wallet; buying a basketball videogame isn’t exactly a bold move in consumer activism, but it felt better than willingly getting sucked into 2K’s pay-to-win machine. Plus, NBA Live’s more arcade-style gameplay was better suited to my scrub sports gaming skills. If you wanted the more progressive and accessible basketball title without nickel and diming, Live had carved out that niche.

That doesn’t totally explain why Live appealed to me more than 2K though. The last non-NBA Jam basketball game I’d played much was some PSone-era college game in middle school, so beyond having recently gotten back into the sport, what the hell reason could my brain have for being pulled toward a game most people agree is solid but not as good as its monolithic competition? That question took me down a small rabbit hole on Google, and it turns out the psychology behind why we love underdogs is complicated (and sometimes less morally pure than we want to believe).

If you wanted the more progressive and accessible basketball title without nickel and diming, Live had carved out that niche.

Some research suggests we back underdogs because we don’t want to be disappointed by high expectations. No one expects anything out of the NBA Live franchise, so maybe there’s something satisfying about seeing it gain ground. Other research shows we want things to be fair and level. Sure, I like to think I have a strong sense of fairness. However, that same research suggests that once former underdogs pull ahead, we also pull our support, which sounds like a weird way to reward success. This phenomenon is partially explained through by other research that argues we just like watching successful people fail because we’re spiteful and lift ourselves up by pushing others down. Watching long-time winners take a dive is satisfying but does anyone deserve our scorn just for being good?

That seemingly insignificant decision to buy a budget-priced basketball game was probably explained by all three. In some ways, NBA 2K represents the worst of where modern sports games have gone wrong, and I don’t want to see onerous DLC schemes become more the norm than they already are. It has also been sickeningly successful, to the extent that it can drive design decisions throughout the genre, much like Call of Duty has done with first-person shooters. Maybe NBA Live just represented one of the final fronts in a fight against sports gaming homogeneity and a step toward pushing Visual Concepts out of complacency (even if I never get the satisfaction of watching them fully fail for their arrogance).

However, NBA Live is made by EA, and EA isn’t anyone’s underdog. It’s an enormous corporation that’s had enough time to compete, and if they blow their momentum now, then maybe they deserve to get steamrolled. NBA 2K is dominant because it’s good, even if it’s insufferable for the same reason. When EA couldn’t get last year’s cover star, Philadelphia 76ers center Joel Embiid, to admit even he played the game, the writing was on the wall. If they turn from scrappy underdog to dispirited loser by showing up late this year, then it might be time to follow the age-old maxim of “if you can’t beat ‘em, join ‘em.”

I want to love you, NBA Live, but if you can’t stick up for yourself, then no one else will either.

Pacesetter’s Chill, and an interview with Nathan D. Paoletta