This feature is a reprint from Unwinnable Monthly #102. If you like what you see, grab the magazine for less than ten dollars, or subscribe and get all future magazines for half price. 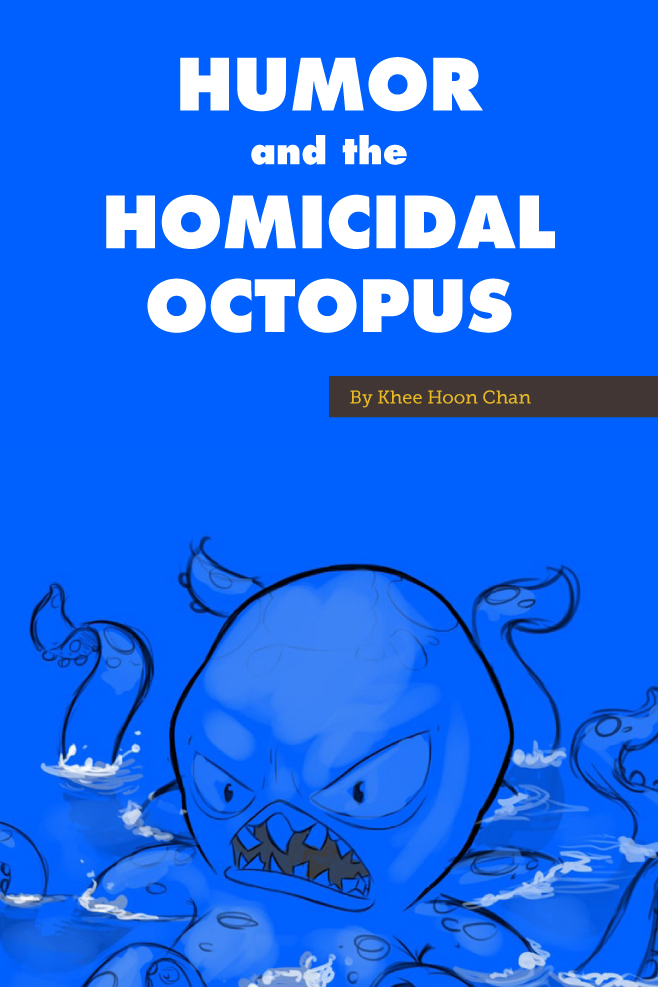 Never aggravate an octopus. Or, if Octogeddon’s apocalyptic tale is to be believed, don’t let yourself be filmed if you’re ever in the unenviable position of serving octopus sashimi as a chef. Don’t grin gleefully into the camera as you oh-so-deftly slice a tentacle off. Just toss that barbaric knife as far away as possible and seek refuge in the nearest cave before you induce a global catastrophe.

One of the funniest gags in Octogeddon, a new shoot ‘em up by indie studio All Yes Go, is the sheer puerility of the human race. For some inexplicable reason, they carry a strange vendetta against octopuses, taking every opportunity to savagely ridicule them. This provoked the ire of one such hulking creature, which promptly sets off from its underwater cave to exact revenge against humanity. By injecting each appendage with the DNA of a ferocious beast, like that of a venomous black mamba or a relentless…chicken, this octopus soon mutates into a Swiss army knife of feral rage.

While the fearsome reputation of octopuses surely precedes them, they’re also known for their immense intelligence. I’m pretty sure these cephalopods are capable of razing entire settlements to the ground if their mood calls for it. At a Santa Monica Pier Aquarium one fateful Thursday morning, workers found about 200 gallons of seawater leaking from a valve—the handiwork of one curious octopus that decided to disassemble the device for fun. Another from the Brighton Aquarium in England had been stealing lumpfish from a neighboring tank, stashing them away as midnight snacks. Only a few days later did the staff realize what was going on.

I thought Octogeddon was a hilarious – and of course, cautionary – tale about octo-violence, and asked George Fan, the designer and founder of All Yes Good, if humor is central to his game-making process. As the co-creator of the much-beloved Plants vs. Zombies and Insaniquarium, Fan’s games are marked by an undeniable sense of quirkiness and fun. What he shared was that the humor in his games serves a functional purpose. While also the byproduct of the games’ mechanics and aesthetics, humor allows him to get away with ridiculous or wacky scenarios in his games as well. “If a game is goofy, you can make a zombie in Plants vs. Zombies jump over your defenses with a pole vault. But having such elements in a game that carries a more serious tone would make a lot less sense,” said Fan.

Such peculiarities, like attaching a wide-eyed penguin to a tentacle as it arduously pants out ice vapors, aren’t anomalies in Fan’s games. From the titular characters in Plants vs. Zombies to the penguin-octopus monstrosity in Octogeddon, Fan has a knack for marrying seemingly disparate elements together, while somehow still making these unholy couplings appear almost organic and logical. In a way, Fan shares some qualities with improv comedians; that’s an associative skill many of them tap into, with one comedian sharing in a report from the British Journal of Psychiatry that this skill helps them write great jokes.

So how did these brain waves come about? For Octogeddon, it was a result of a game jam called Ludum Dare that Fan participated in back in 2012. When tasked with an “evolution” theme, Fan quickly decided the game would be based on an animal with multiple limbs. Initially starting out with only two, this creature would eventually grow more appendages as you proceed through the levels. Octopuses proved to be a perfect fit – and humor would be the glue that binds both this mechanic and Octogeddon’s eventual theme of “nature versus machine” together.

“When I make a game, the mechanics is usually the first thing I come up with, so Octogeddon wasn’t supposed to carry any sort of environmentalist theme. However, the idea of giving the weapons players use a more organic or biological slant is intentional,” shared Fan. “I just thought it would be really funny to have quirky ammunition attached to the octopus’ limbs. The fact that they are also thematically relevant makes it easy to tell which side you’re on at a glance.” Conversely, attackers have a more robotic or mechanical appearance, conveying an obvious sense of otherness. Of course, it’s also immensely satisfying to see a chicken fervently clucking out eggs of untoward destruction, as military aircrafts explode into smithereens upon impact. 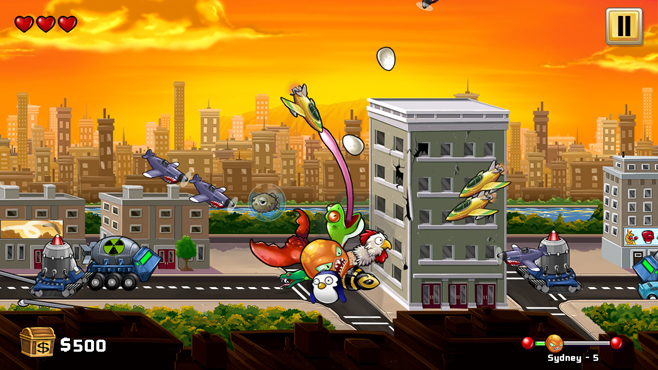 When playing through Octogeddon, it’s easy to see how Fan’s immutable focus on mechanics became the driving force behind the game’s design. For instance, the eight limbs of an octopus is a tidbit most people would be familiar with (it’s in the name, after all), and Fan weaves that factoid in to his advantage. With an octopus as their protagonist, players will instinctively understand they can unlock more limbs in later levels, thus encouraging them to be frugal about their resources during Octogeddon’s earlier stages. But to say that humor is merely an afterthought wouldn’t do his team’s brand of playful humor justice; the game just wouldn’t be half as memorable without the maniacal glint in the Octopus’ eyes—and this is a point that Fan acknowledged too.

Going back to Plants vs. Zombies, Fan explained how he drew his inspiration from a Warcraft tower defense mod, which is about protecting your base against waves of attacking orcs. Although functional, these defending towers are, in Fan’s words, “a little bit dull”. “They are just lightning towers or arrow towers,” he mused. Humor served as a panacea to this issue in Plants vs. Zombies, where the plants – the game’s main lines of defense – can be imbued with their own personality. A memorable one is the Tall-Nut, a plant that plays a more defensive role. It tragically sheds a tear when it gets too chewed on, as if deeply aware of its impending finality.

Octogeddon will hardly ever be labelled as comedy – just that it has comedic elements – but the bulk of its humor is driven by the Octopus’ lack of impulse control and the human race’s unrelenting penchant for tormenting its species. This story is told through a series of short but side-splittingly hilarious cutscenes that, according to Fan, serve as rewards for successfully completing levels. This feels like a risky maneuver; cutscenes in videogames can seem unnecessary or intrusive when handled poorly, while running the risk of losing the attention of players who just want to dive straight into the game. That’s why Fan was delighted to find out that the reception to these scenes have been largely positive.

“I usually don’t like to include stories in games, mostly because I think I’m not very good at it,” Fan said with a laugh. “I prefer to get people right into the action as fast as possible, but (the artist) Rich Werner and I decided that we would make an exception for Octogeddon.” 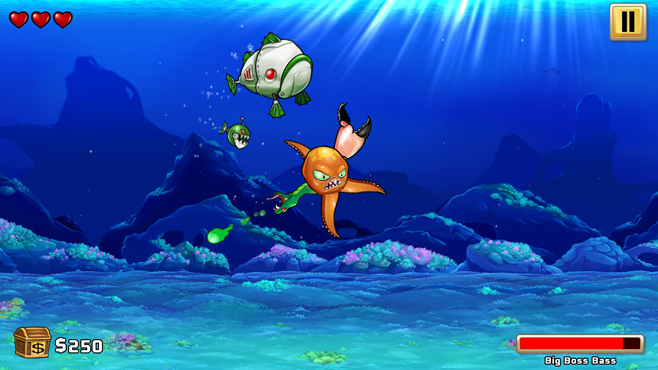 Yet, despite the medium’s capacity for comedy, there aren’t many games that are intentionally funny, or developed solely to make players laugh. According to Fan, the humor arises mostly from shared, hilarious moments in multiplayer tiles, such as when another player makes a terrible mistake that costs them their victory. Others, like the Monkey Island series, rely on scripted humor that may only be funny the first time round. “Some adventure games, for instance, are really funny and can make you laugh a lot, but once you’ve played them once, it’s hard to laugh at them again because you would already know what the joke is about,” said Fan. But what if the capacity of games to endlessly generate content, such as procedural generation, is applied to humor? It’s an idea that Fan has pondered. “At the back of my mind, I was thinking that one day I’m going to make a game that would make people laugh every time they play it. So it’s not going to require laughing at your friends’ misery, like in multiplayer games, nor will it be circumstantial humor.”

At the end of the day, one of Fan’s core tenets to game-making will always be about keeping his games widely accessible to all players, regardless of skill level. It’s what led to the immense popularity of Plants vs. Zombies in the first place anyway. Even though it’s usually not the crux of his games, Fan finds that humor often sweeten this process while giving the final product another layer of polish. After all, keeping a game designer’s sense of humor and wacky personality away from their creations is just one punchline away from disaster.

Khee Hoon Chan is a freelance writer and copywriter from Singapore. She daydreams about being a professional Street Fighter player. Ask her about the weather on Twitter at @crapstacular.