N.B.: writer was given a copy of this game in beta.

The story revolves around Laura Silver and Orewell Cooper as they investigate an attack on two fishermen by a mythical vodnik in a small Czechoslovakian town. They both belong to an agency that specializes in investigating the paranormal, though Laura is the more seasoned of the two. They arrive at their hotel (under the guise of being movie makers) and stumble into a new mystery that can only be solved through good detective work and the application of their wits. Unfortunately, said wits are in rather short supply.

Laura is, shall we say, not the sort of detective on the fast track to making chief constable. Her first reaction to coming across a locked hotel door is attempting to break it down, followed by drawing her gun to shoot off the lock. To her, both of these options obviously precede acquiring a spare key from the front desk. She happens upon a murdered man’s lighter and attempts to pocket it, explaining that it’s a nice lighter so why not? She tries to distract people from seeing her secret notebook via dumping a cup of (possibly) poisoned tea over her head, which is apparently her coping mechanism for high stress situations. Meanwhile, Cooper is weakly trying to fumble his way through the investigation while also insisting to the Czech population at large that his last name is definitely Cooper not Copper, thank you very much.

On the surface, this sounds like a bad buddy cop comedy. But Misadventures of Laura Silver makes it work by giving Laura and Orewell competent and realistic investigative skills to pair with their incompetence regarding the mundane. Both of these detectives know what to look for when searching a room, what questions to ask in an interview and how to properly connect the dots between seemingly random events. Laura may insist that she’s figured out the culprit’s identity even without getting Orewell’s input, but when they get a chance to hash the case out you can pick up on something bordering mutual respect developing between the pair. I wouldn’t trust either of them to so much as fry an egg in my kitchen, but if I ended up dead in a ditch I could reasonably expect them to solve my murder. 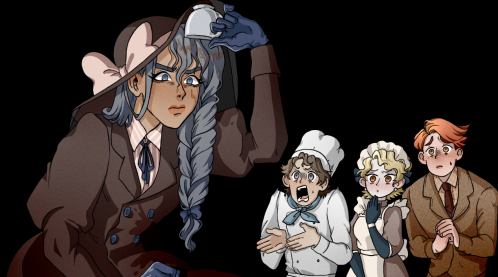 Laura and Orewell come across as a blessed reprieve from insufferably brilliant detectives that are oh so popular in the mystery genre. Shows like Case Closed or BBC’s Sherlock aren’t about solving the mystery so much as proving how astoundingly clever their protagonists are. The murders are practically Rube Goldberg machines in their own right, to the extent that their being solved comes across as a superhuman task accomplished by a being who transcends the limits of mere mortals. It’s crafted to be less a mental puzzle and more an absurd fantasy that encourages the audience not to engage in the case, but rather sit back and let someone far more intelligent than you do calculations and make connections which are clearly beyond your capabilities.

Laura and Orewell aren’t genius detectives who are guaranteed to swoop in a save the day merely by coming into contact with the case. They’re quick to point out flaws in the other, or realize that they made a mistake investigating and should have said this or done that. It’s entirely possible for them to have the right hunch and then stumble down the wrong path due to a few errors made during interrogations (as I sadly found out during my first playthrough). They are fallible creatures capable of being misled, yet also carry the potential to uncover the truth.

It works astoundingly well for a visual novel. I don’t feel as though I’m playing a mystery with the training wheels on, because I can just as easily accuse an innocent victim as the actual murderer if I’m not mindful. I’m not pretending to be the world’s greatest paranormal investigator, but if I play my hand right then Laura and Orewell can catch the perpetrator in the end. And that feels like a real accomplishment, particularly after last week’s slog through Kotodama.

Misadventures of Laura Silver definitely isn’t a perfect game; there were hiccups with some English phrases at times, since the writers are Turkisk, and I had a few bugs like Laura’s sprite trying to fly off the screen or everything disappearing when I opened the notebook in a car. But for the most part? I love this visual novel. I love the art style, I love the characters, I love the musical choices and, above all, I love that Misadventures of Laura Silver works to make the good ending feel like an absolute victory and the bad endings like a gut punch you desperately want to avoid at all costs.

The first chapter of Misadventures of Laura Silver is available on Steam and itch.io, with the next part set to release in 2020.  I strongly encourage you to pick up this delightful little VN.