Hermes and Gry: A Crooked Plan is a cautionary tale about the soul-crushing reality of working for an employer with zero ethics.

The titular main characters of this visual novel are Gry, a self-made noble with a mysterious ability to reverse time in small pockets, and Hermes, his world-weary servant with surprisingly strong thighs and a mean right hook.  The supposed object of this VN is to travel around the small town of Onoir and recruit the world’s greatest warrior to follow Gry in his quest for global domination, but the true joy in playing Hermes and Gry comes from seeing what terrible things Hermes will be subjected to next in the course of his employment.

To really grasp the horror of Hermes situation, you have to understand that the VN takes place in a post-apocalyptic medieval setting.  A year ago the entire world was rocked by an event called the Cataclysm, when a massive number of natural disasters coincided with a meteor strike and wiped out at least half the world’s population, forcing the other half to rebuild society from the ground up.  Hermes was one of these survivors, although he lost his family and town to the disaster, whereupon he somehow ended up in the employment of Gry.  To me, he represents every young worker who has absolutely no chance of financial success in their small hometown and immediately jumps on the first opportunity they happen upon to leave said town and stick with it, no matter how abysmally catastrophic this decision turns out to be later.

Hermes and Gry establishes very early on exactly what kind of employer-employee relationship the pair of them have, and let me tell you, it’s not one that suggests Gry is up for any kind of employer of the year award.  Hermes is made to carry all of their supplies at all times, which include a full barrel of good ale and a tent big enough for ten, even when escaping the wrath of bandits on horseback or trying to climb a three-story building.  Occasionally Hermes will have to carry Gry as well when his foot is “itching,” and does so without an ounce of complaint.  Throughout the story it’s Hermes who will do the majority of the grunt work and labor, and without so much as a thanks from the slightly sociopathic, definitely narcissistic wannabe king he’s following.  If ever you’ve been in a situation with a boss that demanded far too much from you on a daily basis, you’ll empathize with Hermes.

The beauty of Hermes and Gry is how it takes this power imbalance to such an extreme that it surpasses infuriating and comes off as hilariously absurd.  The exact moment I fell in love with this VN happened when Hermes got his foot stuck in a hole, and Gry demanded that he saw off the foot so they could continue along their journey.  Hermes merely reminded Gry that they’d lost their last knife in the ribcage of a particularly aggressive merchant, before he began trying to saw off his leg very slowly with a nearby rock.  It’s only after several minutes of this that Gry grows impatient enough to make the effort to help pull his servant free of the hole.  Again, anyone who’s ever had to deal with a less than stellar employer understands the pain of a superior who would demand you putting your own health in danger for their benefit and can’t help but laugh.

There are several different paths you can take in Hermes and Gry to get different endings, but they all share the commonality of making Hermes suffer in unique ways.  Depending on what scheme you go with, Hermes might end up stabbed, poisoned, sold into slavery, pursued by an angry mob, stuffed into the bottom of a well, or worse.  Yet Hermes takes it all in stride and doesn’t even bother protesting at Gry’s outrageous demands beyond questioning the logistics of a plan every now and again.  Part of this acceptance doubtlessly stems from the fact that he knows  protests against the overarching scheme will ultimately fall on deaf ears, and so his best bet is to settle for demanding only the most minor of changes.

For his part, Gry is absolutely the epitome of a terrible boss.  He seems to only have the most general of plans laid out for long-term goals of rebuilding the shattered remains of several fallen kingdoms and eventual world domination, yet still expects Hermes to obey him absolutely.  Any deviation on Hermes’ part is interpreted as outright idiocy and the root cause of all their problems for that day without fail.  Gry openly becomes frustrated when his mind games (a.k.a. throwing the word ‘relativity’ and a heap of lazy metaphors at an unsuspecting victim) don’t work on Hermes, and often verbally berates him because there’s nothing else for him to use in his verbal arsenal.  Gry even made up an acronym, S.U.H., or “Shut up Hermes” because yelling at his one and only servant is too much energy.  Again, the story makes this so outlandish that you can’t help but laugh; it took me ages to stop snickering the first time that I pulled up the inventory and saw that Gry considered Hermes to be a useable tool in the first inventory slot. 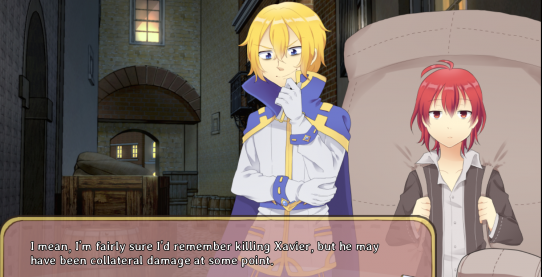 At the same time, there are certain moments of the story that suggest Hermes isn’t exactly the character you want to turn to in search of a moral high ground.  He has no problems with psychological torture or mass murder in some scenarios, and deals with the incredibly messy consequences of Gry’s actions with quiet resignation, as opposed to a far more reasonable emotion like abject horror.  It’s like he’s become so entrenched in this horrible job run by a nightmare boss that he’s incapable of registering exactly how bad things have become; Hermes and Gry are even on the same page about not discussing exactly how many knives from their traveling cooking set have ended up permanently jammed in someone else’s vital organs.

Why put up with this?  Well the story points to Hermes having some sort of unrequited feelings for Gry, which I’m choosing to interpret as the medieval equivalent of misplaced company loyalty.  It’s never made clear what exactly Hermes gets out of this business relationship with Gry other than not staying permanently dead as a result of Gry’s plans (and yes, in this VN you do have to differentiate between regular dead and perma-dead).  Personally, I see it as a normal guy being forced to make the best of a truly awful situation with very few employment opportunities at hand (you know, what with the world having nearly ended and all that), and gradually becoming so immersed in the monstrous daily dealings of his employer that he hasn’t even noticed his alignment shifting to neutral evil until it’s too late to save himself.

Hermes and Gry: A Crooked Plan is available for free on lemmasoft, and I strongly encourage you to give it a stab.