I am a firm believer in the idea that telling someone “He’s a nice guy once you get to know him,” is just a person’s way of saying “He’s an asshole but you get used to it,” without having to admit that they befriended a terrible person and now see no way out of the friendship.  The inability to break things off with this terrible person could stem from any number of things. Perhaps this is a person to whom you used to be very close but more recently things have become strained, yet they haven’t quite expended all the goodwill they amalgamated in years past with you when times were better.  Maybe they are unfortunately firmly bound to you by ties of marriage or interoffice politics, and you’ve become numb to their antics as a means of self-defense. Or perhaps their awfulness is restrained just enough to keep you from taking that initiative to break free of the friendship, and now you’ve become so immersed in the toxicity of this relationship you don’t even harbor a faint hope of breaking free, connecting them to you like a misshapen skin tag you don’t bother asking your dermatologist to cut away.

The main character of So Long, Summer Days is just such an unpleasant individual that people can’t seem to be rid of.

So Long, Summer Days chiefly follows Pan and Raquel: ageless, married, and living together for reasons that neither of them can explain in any satisfactory fashion.  In fact, they actively try not to think too long about their relationship when questions like “Why am I still here?” come up after sex, actively ignoring the other party until someone falls asleep or a distraction of some sort occurs.  Over half of the story revolves around scenes with just the two of them home alone, usually with a radio playing in the background as they sit on a couch or lie on the floor to stare at the ceiling fan spinning above their heads. In a normal situation this scenario might come across as romantic; who doesn’t like the idea of two married people quietly enjoying life in each other’s company?  But Pan reiterates over and over again how distant he and Raquel are from one another, how even when they are physically touching he doesn’t feel any kind of deeper connection to his wife, and how oftentimes questions he asks her (or vice versa) go unanswered and are never brought up again. The writer does an excellent job of making you feel like a third wheel in your friends’ apartment when everyone knows that the relationship is at an end, but no one is willing to say it aloud and make it real. 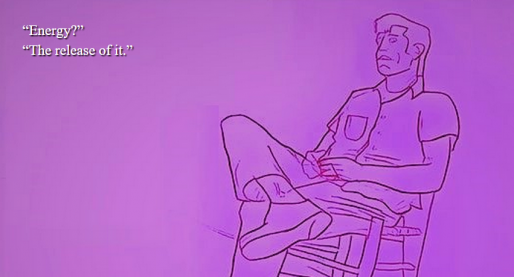 This dynamic is especially problematic because Pan is clearly very dependent on interactions with Raquel in his daily life to give it any sort of meaning.  Pan’s days are firmly divided into the categories of time spent with Raquel and time spent away from her. He’ll take solo walks on the beach or go into town, but that’s the extent of his daily adventures.  He’s out of work, lonely, and seemingly incapable of forming any kind of attachments to other people because he can’t stop being insufferable long enough to get people to like him. Pan is living in an isolated world that he’s constructed for himself, and relying on his romantic partner to try and fill the void of affirmation and companionship that he clearly gets nowhere else.

When he does try to interact with others, it never ends well. So Long, Summer Days is a focused look at one extremely toxic individual, after all, and goodness if Pan doesn’t ruin everything he touches just by being himself.  Pan and Raquel don’t have a car of their own; usually they borrow the neighbor’s car to such a degree of frequency that Pan selfishly assumes it’ll be available for his grocery trip and is surprised to hear the neighbors are using it to go to work.  He badgers the grocer into letting him trade food stamps for cigarettes. When their pet dog dies, Pan waits for Raquel to find the dog in the laundry room and call a family friend to bury it because he doesn’t want to handle the disposal of a dead pet.  Pan is a parasite surviving on the goodwill and patience of others, none of whom seem to have any genuine affection for him but rather merely tolerate his presence because eventually he’ll wander off to the beach again.

Oddly enough, I’m fairly certain Pan knows this.  He talks at length about being lonely, even if he doesn’t use those exact words.  Nothing around him seems to make him happy, and his life is filled with a recurring motif of dead animals (beached jellyfish in particular) and a meaningless void of time passing without purpose.  He claims to be a philosopher but won’t publish anything out of a fear of “boring” people. Even Raquel, the only person with whom he has an actual relationship, seems to be forcing herself through the motions of fondness (I certainly wouldn’t call it love) by the end of the story, and he clearly picks up on this.

Pan is likely depressed and certainly has no goals, no friendships outside of his wife, and a morbid fascination with death and fatalism.  His situation of living in a small Florida house with Raquel on food stamps and government assistance is not ideal, but stable enough for him.  And clearly there is a whole community of people who are willing to enable his parasitism despite the fact that they clearly reap no benefits from his behavior.  Pan is an individual that adds nothing of value to anyone’s life, yet because he is not overtly abusive or too draining on the people around him, he is allowed to continue being a presence in their lives.

The story seems to end rather abruptly after yet another talk between Raquel and Pan that ultimately leads to neither change in their relationship nor a deeper understanding of each other as spouses.  There is no catharsis, no great twist of Raquel deciding to pack up and leave or even a small adjustment on Pan’s part to alter any part of his daily life. Why would there be? Toxic individuals have no need to change once they’ve found a social niche that will allow their poor behavior to flourish.  If the story had jumped ahead another month or year, it wouldn’t have mattered. Likely, the reader would have found Pan and Raquel still lying on the floor of that house, staring at a ceiling fan in silence and being alone as ever.

So Long, Summer Days is available on lemmasoft for free.  I’m not sure to recommend it or not recommend it; it’s an interesting look at interpersonal relationships, but it’s also pretty sure and plagued with typos or artwork that doesn’t match the actions on-screen.  Check it out if that’s something up your alley, I guess.