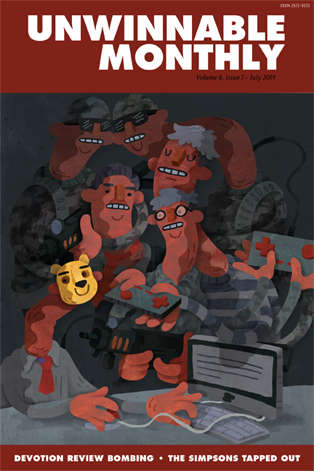 This is a reprint of the letter from the editor in Unwinnable Monthly Issue 117. You can buy Issue 117 now, or purchase a monthly subscription to make sure you never miss an issue!

July is here, bringing with it fireworks, god awful heat and a new season of Stranger Things, which I am sure you’ve probably already binged. How about a new Unwinnable Monthly to read in a single sitting?

Our cover story is a wild one. Dick Page looks at the recent controversy surrounding the Taiwanese developed game Devotion and digs into the things Western audiences missed while having a chuckle thinking about how Chinese president Xi Jinping resembles a certain cartoon bear. Seb Wescott’s rather nightmarish cover gives you some sense of the tangle of threads you’ll find within.

Seb’s work isn’t always so dark, by the way. You can see amusing images of birds trying to work cell phones in our Artist Spotlight this month.

Our second feature, by Noah Springer, is a short musing on the mobile game The Simpsons Tap Out that winds up touching on interesting questions about the digital worlds we visit and create through videogames.

In the columns, I’d like to welcome Justin Reeve to the fold. Justin has been on a bit of a tear recently in Unwinnable and I am psyched to have him contributing regularly to the Monthly now, looking mainly at architecture in videogames. This month, his column is about how people form mental maps of cities and how the developers of The Witcher 3’s city of Novigrad proves cities don’t have to be physical for the phenomenon to work.

Gavin Craig repeats himself and wonders what that is all about. Megan Condis ponders the appeal of TV game shows. Noah Springer submits several new hip hop albums for your approval. Alyse Stanley checks out a choose your own adventure-style Twitter thread. Ben Sailer revisits the Oddworld franchise ahead of the release of its latest installment. Corey Milne succumbs to Nintendo nostalgia despite having only limited exposure to Nintendo products in his youth. Matt Marrone wonders if his long time Words With Friends partners think he is dead. Yussef Cole digs deep into Evangelion (a piece that resonates a bit with Gavin’s musing on repetition). Rob Rich remembers comedian Mitch Hedberg. Adam Boffa revisits Nausicaä.

And that rounds things out. Thanks for checking us out. We’ll be back in a couple weeks with another issue of Exploits. Until then, stay cool gang!

The Culture of Foot Binding