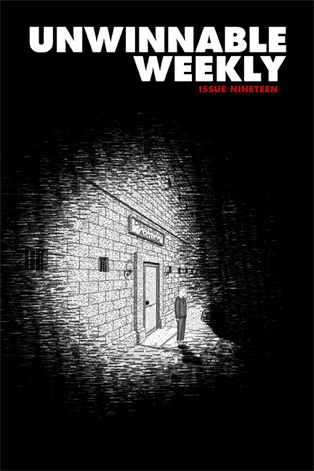 The other night, some subhuman sent the most detestable death threats to a female developer via Twitter. I have never read such an awful series of sentences.

A colleague tried to report the tweets to Twitter as threatening. After using the cumbersome interface, she was notified that Twitter only reviews harassment reports if you are the person being harassed, or are their legal representative. This policy is in place to ensure Twitter is in direct contact with the person experiencing abuse, ostensibly so they can request additional, private information.

Pretend, for a moment, that you are a woman who has attracted the wrath of the gibbering, hateful horde of GamerGate. Imagine that you have been fielding their insults and accusations all day, for several days, and Christ, you’re just fucking tired of it and you walk away from your computer. You take a break for a couple hours. You have a nice dinner. You read a book.

Pretend that is the exact moment that someone creates a new Twitter account dedicated to your murder. Pretend that they immediately start threatening to commit a specific crime at a specific place. Pretend they tweet your home address and then tweet a photo of a knife.

But you don’t know they’ve done this. They didn’t actually tag you in the posts, so your phone hasn’t buzzed (you put it on silent anyway). There you are, sitting in your home, turning the pages of a novel, sipping some red wine, a million miles away from what you thought was just a meaningless internet drama anyway.

Let me try this another way.

You live across the street from a nice, middle aged couple. You know their comings and going pretty well, and you know for sure they’re in bed no later than 11. You happen to look out your window and see a shadowy figure lurking in their front yard, examining a window. Alarmed, you call the police.

“Kearny Police, how can I help you?”

“There is a man trying to break into my neighbor’s house.”

“Your neighbor? I’m sorry, if that’s the case, they have to call themselves. If he tries to break into your house, though, give us a call back.”

My colleague Photoshopped together a small infographic explaining what happened and tweeted it out, suggesting her followers do the same while asking Twitter to address the problem. I followed her lead.

A thousand retweets later, I had about a dozen people tell me that the harassment was a police matter and not Twitter’s responsibility. I agree with the first part – unlike my hypothetical situation, in real life the target of the harassment watched it happen and immediately reported it to the police – but I take serious umbrage at the second.

A township has a responsibility to keep its parks safe for the children who use them. If someone dumps a pile of rusting scrap metal in the middle of a playground, the town has to clean it up. Businesses have the same responsibility to their employees thanks to OSHA. If someone breaks his or her ankle because they trip on an uneven slate in front of your house, guess what? You’re liable.

Twitter, whether it likes it or not, has a duty to ensure its users are safe. So does every other social network, message board or website where people congregate and interact. There isn’t some magical exemption for the internet, especially since it is increasingly our playground and our workplace.

As the events of recent months continue to prove, the digital world can be pretty cool while simultaneously being pretty fucking awful. We could probably use a whole lot fewer aloof Silicon Valley technocrats and a legion more Trons who are willing to fight for the user.

Anyway. Sorry if that was a bummer. On to the fun stuff!

This week, Matt Marrone mourns the loss of Epcot’s Maelstrom ride. Adam Boffa plays through 2003’s classic BioWare release, Star Wars: Knights of the Old Republic. I keep my eye firmly on horror while playing Neverending Nightmares and wondering why videogames are so bad at horror. And, finally, Gus Mastrapa reveals the latest chapter in the adventures of Daisy the dungeon crawler.

As usual, you can give me a piece of your mind or a verbal high five via email at stuhorvath@unwinnable.com.

This is a reprint of the letter from the editor in Unwinnable Weekly Issue Nineteen. You can buy Issue Nineteen individually now, or purchase a one-month subscription to make sure you never miss and issue!