This is a reprint of the letter from the editor in Unwinnable Weekly Issue Thirty-Nine – check out the excerpts at the end of the post. You can buy Issue Thirty-Nine individually now, or purchase a one-month subscription to make sure you never miss an issue! 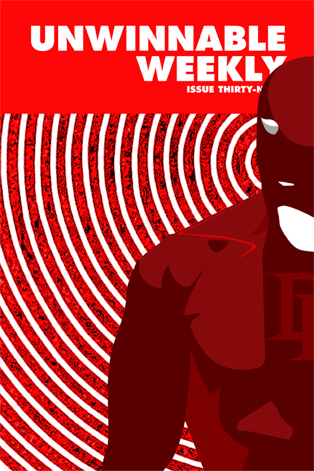 Let me tell you the brief summary of a gag gone wrong. Following rumors that Lego was announcing a new game called Lego Dimensions, Michael McWhertor sought out and purchased the domain for legodimensions.com. After the official announcement of Lego Dimensions, he took that domain and pointed it at toward a story about the game on the gaming news website Polygon. This troubles me because Michael McWhertor is the Deputy News Editor at Polygon.

Blowback on McWhertor’s gag happened almost immediately after he announced what he had done on Twitter. It was only about twenty minutes by my count before the domain was pointing at the official Lego Dimension website, and another dozen or so before McWhertor announced that he had transferred ownership of the domain to the Lego Group.

You can read a longer account of the snafu in this story by Kyle Orland on Ars Technica.

Now, I want to be emphatic here: I do not believe McWhertor had any malice in mind. I do not think he was using information that was under embargo or otherwise not available to the public. I believe him when he says he was genuinely curious to see what would happen if he bought the domain.

As a gag, though, I do not think this was a funny one. And while I believe McWhertor’s intentions were good, I also understand why other people do not. This is an excellent example of how the appearance of impropriety can be just as bad, if not worse, than impropriety itself.

Way back, when I first got a byline at the New York Daily News, it was impressed on me by mentors, bosses, managers, editors and random people walking down the hallway that I was now an agent of the organization. This meant that, whether I was at a press event or sitting at the bar, I was representing the NYDN. I inferred that to not take this seriously was to put my ongoing employment at risk.

This makes sense. Whatever your opinion of the NYDN, it is a storied institution with a very long history in New York City. To cover stories on their behalf lends you some of their clout, their decades influence. Should you wield that influence inappropriately – to get out of a parking ticket, to get a free drink, to line your pockets – you damage it. When people talk about the jerk who was flashing his press pass around, they probably won’t rememeber your name – you’ll just be “that guy from the Daily News.”

If enough people in an organization act that way, it diminishes that organization. If enough organizations get the reputation for abusing their power, then the entire profession suffers. “Journalist” becomes a dirty word.

Don’t believe that’s possible? Just look at lawyers, politicians and everyone on Wall Street. Journalists of all stripes have worked in the shadow of corruption for years. Somehow, despite scandals like the Daily Mirror’s phone hacking, there is still a modicum of respect for the profession, but the public’s good will is fickle and fleeting.

McWhertor’s gag was a small thing, but every landslide starts with a pebble, especially when social media amplifies every transgression a hundredfold. To shrug, to profess that it is not a big deal makes it easier for something similar to happen again. It confirms the wild theories of fringe detractors. It whittles away at the public’s faith. It just plain looks bad.

Chris Grant, the Editor in Chief at Polygon said, “There was no extortion. There was no squatting. The domain is in the hands of Lego. I fail to see this as a scandal.”

This week, our cover story, by Mike Edwards, looks back the first time Daredevil appeared on the small screen, in the silly made-for-TV movie The Trial of the Incredible Hulk. Matt Marrone gets obsessive about walking thanks to his FitBit. L. Rhodes discusses God and obedience with Merritt Kopas. Finally, Gus Mastrapa’s Daisy runs into something terrible in the sewers in the latest installment of Dungeon Crawler.

Over on the Unwinnable site, I’d like to direct you to Pippin Barr’s new game Jostle Parent, the sequel to Jostle Bastard. It is a totally accurate simulation of parenthood.

I’d also like to point out that next weekend is Geek Flea 9, so if you’re in the North Jersey area, you should come out and hang. We’ve got collectibles, art, craft, DJs, baked goods – you name it. No better way to celebrate the end of winter.

That’s all I’ve got this week. Be cool to each other and have a great weekend. If you need me, get me at stuhorvath@unwinnable.com.

[Justin] is Villain No. 1 in a week that would become physically and mentally torturous. Villain No. 2: My own OCD. Villain No. 3: The Wife of the Year, who told me, “Why are you so worried about this? You’re not going to win.” Oh, that did it. It was on.

“The First – And Last – Workweek Hustle,” by Matt Marrone

I was surprised a few weeks ago to see multimedia artist and developer Merritt Kopas tweet a link to what she called “a tiny new game about French Christian mysticism.” Videogames about explicitly religious themes are rare enough, but the announcement was particularly unexpected coming from Kopas, whose work has more typically explored the intersection between kink and interpersonal concern.

Daredevil is a character with a rich history. Some of the best writers and artists in the comic biz have put him through the ringer in countless epic story arcs.  Ever time, he overcome the most impossible of odds (not the least of which is coming back to any kind of screen after the lackluster Ben Affleck movie). That said, The Trial of the Incredible Hulk has some issues.

“Matt Murdoch Finally Gets His,” by Michael Edwards

Daisy was waist-deep in filth when she saw the first rat. She pulled her dagger from its makeshift sheath in her belt and held the blade at the ready, but the vermin was not there to fight. It just peered out from the gap in a broken section of the sewer pipe. Its red eyes glowered at her, unblinking.