Just a few of the good pets and words from Unwinnable’s long-awaited Pets issue. So many pets. Take your allergy pills, folks.

Look, I know you might look at the title and wonder — why is there a piece about chickens in the Pets issue? You’re probably thinking dogs, cats, maybe a hamster or two. But, tons of people also keep chickens as pets, including my grandparents. They can also kick a lot of ass. Did you ever hear about the chicken who killed a guy with a knife? As an ever-curious critic, this made a question bubble up in my brain: Which videogame chickens could kick my ass? After all, The Game Take is always the best take.

Now, before we get started, we should establish a few things. I’m 5’1″ (and three quarters). I cried at Devil May Cry 5. I can’t lift most things (even though I try). I became a vegetarian because eating meat around my guinea pigs made me sad. Long story short, I can’t kick very many asses. So, if you’re also trying to size up these chickens, keep in mind that you might be able to kick more chicken asses than me.

Here’s a selection of seven videogame chickens, listed in order of least to most likely to kick my ass. You might think of other chickens, and you might get your ass kicked more or less than I. This list is merely a starting point to get you thinking about your place in the videogame chicken pecking order.

Farming Simulator made me feel dead inside. I came into the game expecting another play on Harvest Moon, ready to pet cute animals and grow yummy vegetables. Little did I know that I would be controlling tractor equipment on a painstakingly detailed level. The only heart that I could find in the game were the chickens, who laid eggs for you to lovingly collect by hand. Thanks for making me feel less dead, Farming Simulator chickens.

In Metal Gear Solid 4, Snake, Otacon and their adopted daughter Sunny have three chickens. Their names are Solid, Liquid and Solidus – the codenames for Snake and his brothers. The human Solid Snake might pretend to be grumpy, but maybe he cares more about his family than you’d expect. Another case of chickens healing me instead of hurting me. 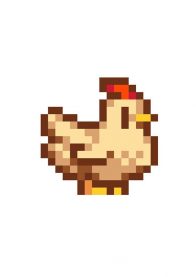 Stardew Valley’s great – it hits all the right spots for your Harvest Moon fix while bringing something new to the table. Its chickens don’t give me life like the last two entries, but I don’t think they would try to kick my ass.

Okay, so here’s where we get into ass-kicking territory. The Animal Crossing world generally prioritizes peace and harmony, but you can really piss off the villagers sometimes. While I don’t think any of the chicken villagers would try to kick my ass, they probably have considered it, and these are human-sized chickens we’re talking about.

Ass-Kicking Level: Could kick my ass, but won’t

The Skyrim chickens are the smartest birds on this list. If you hurt one of them, they might not kick your ass, but they’ll tell the guards to kick your ass for them. These chickens have hired security on them at all times, and I’m pretty sure they know how to do more algebra than me.

2. The Legend of Zelda (Series) 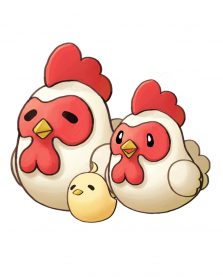 I have a confession to make. A videogame chicken already kicked my ass. It bruised my heart and soul and taught me to pay more attention while gaming. And yes, it was from a Harvest Moon game.

The Harvest Moon series stresses the importance of life and nature, and Harvest Moon 64 pulls no punches in this regard. If you disrespect any of the animals or people in this game, you’re gonna have a bad time. This is especially true when you happen to screw up and let one of your animals die.

Flashback to 7-year-old Melissa. I went to feed my chicken in Harvest Moon 64 and couldn’t find it. After looking for about two seconds, I figured that I forgot to save when I bought it because I reloaded sometimes.

Well, I guess it was hiding in the corner of the coop, because that chicken was dead within a few Harvest Moon days. When an animal dies from neglect in Harvest Moon 64, they make sure that you’ll never forget it. The animal seller threw a goddamn FUNERAL for the chicken, all the while shaming me for abandoning it. Pretty sure the mayor was on my butt about it, too. I learned a lot about respecting life from that incident, but I’m still a little fucked up over it.

Melissa King is the managing editor of Exploits and Unwinnable’s social media editor, but from time to time, she writes a thing like she did for this issue. Follow her on Twitter @LongLiveMelKing or just holler at the @Unwinnable account itself.

The World Next Door Is a Nice Enough Neighbor