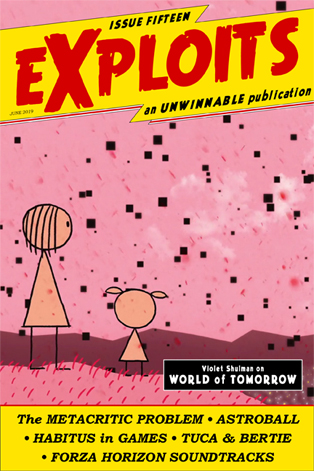 This is a reprint of the cover story from Issue #15 of Exploits, our collaborative cultural diary in magazine form. If you like what you see, buy it now for $2, or subscribe to never miss an issue (note: Exploits is always free for subscribers of Unwinnable Monthly).

Don Hertzfeldt’s World of Tomorrow is an animated short about two instances of a woman named Emily.

Emily Prime – the original Emily – is a child, maybe three years old. She laughs and smiles and talks a lot. She lives somewhere at some time. For this essay, we’ll say Emily Prime exists “now.”

Emily Prime lives in a world where, instead of having children, people pass their memories on to clones of themselves, in a bid for immortality.

The other Emily – let’s call her Emily 3 – is an adult woman. She’s a third generation clone of Emily Prime, a copy of a copy of a copy, degraded like a VHS tape. She speaks in a British-accented monotone and slurs the occasional word.

Emily 3 lives 227 years from now. A meteorite is due to impact the Earth 60 days later. She will die horribly, along with everyone else in the world. Faced with this (and compelled by a centuries-old memory of a visit from herself), Emily 3 reaches back in time and drags Emily Prime into her doomed, memory-obsessed future. And that’s basically the movie.

American media is rarely made with trans people in mind. With a few, possibly dubious exceptions, like “Candy Says,” by the Velvet Underground, stories with trans narrators just aren’t published very often.

Films might show the image of the transfemme as a terrifying narcissist, a la Silence of the Lambs. Or they might make us funny, as in Rocky Horror. More recently, we might be treated as palatable, as in Dallas Buyers Club (Jared Leto’s involvement notwithstanding).

The problem with these stories is that they’re built for a cis audience. They glaze their trans characters over with Otherness, until the character who remains isn’t quite a person.

World of Tomorrow’s Emilies aren’t quite people, either. They’re one person split in two, and this blurs the line between Self and Other into nonexistence. In a sense, to be trans is also to be pulled in half, like Emily. In my transness, I’m a Self, and I’m an Other – a person, and a monster, stuffed into one body. It’s a point where the West’s idea of identity breaks down.

As far as I know, World of Tomorrow is one of the only films to cross that line with its story. And I think that’s what makes it so powerful as a trans narrative – it puts language to the indescribable pain of dysphoria.