Late-stage capitalism is a plague unto the world. It exists solely to wring profit out of the masses and line the pockets of the 1%. And corporations are more than happy to cut corners and engage in anti-consumer practices if it results in more money being made. Because the only thing that matters is profit, and said profit is used to make even more profit, developing into an amoral money vortex that leaves the rest of the world destitute in its wake. Nothing illustrates the nihilistic nature of capitalism and profit better than putting you in the driver’s seat of the profit machine to see what its like, which ends up being Shakedown: Hawaii’s greatest and most terrible success.

Shakedown: Hawaii structures itself like one of the pre-III Grand Theft Auto games, complete with a top-down viewpoint. That shouldn’t come as any surprise as it serves as a follow-up to Brian Provinciano’s Retro City Rampage, a tribute to both GTA and the 8-bit era of games that also leaned heavily on parody to sell its story. Shakedown: Hawaii does as well, but here it’s laser-focused on unfettered capitalism, placing you in the shoes of an out-of-touch CEO who must claw his way back to the top of the corporate world, consumers be damned. Missions revolve around you claiming new sources of income through over-the-top illegal means, and are themed around satirical takes on actual things corporations do, including true-to-life spreading trademarked seeds onto a privately owned farm in order to repossess it as your own.

The key here is money, as you’ll generate a daily income based on what properties you own and what sources of income you gain. Accrue enough and you’ll be able to buy more properties on the island and generate more money, which will in turn let you buy even more expensive properties. See the problem here? You’re constantly building yourself up for the sake of watching your numbers get bigger. And the more you do it, the more you’re going to lean on higher ticket attractions to make even more money. Add to all that the fact that you can apply multipliers to any building you own – for a price – and voila, you’ve ensconced yourself into a capitalism circle jerk. Which is the point. 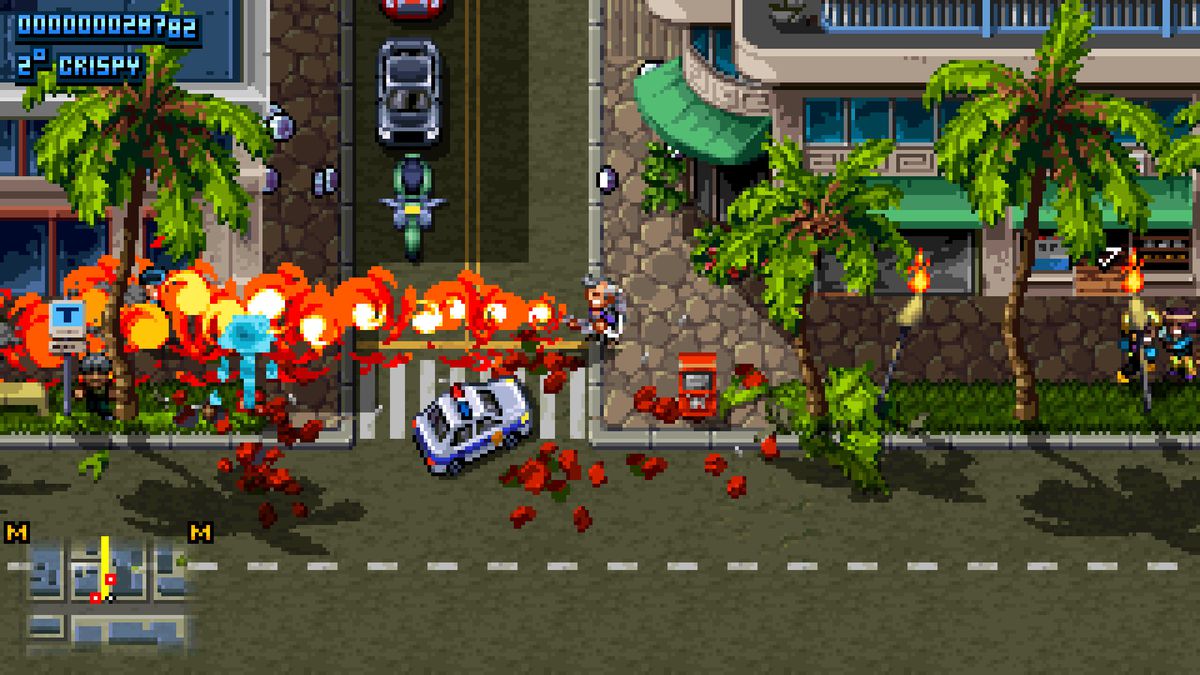 When we play games, watching numbers get bigger is generally a pleasurable feeling, and something we actively strive for. We’ll level up our characters in RPGs to do bigger numbers worth of damage. We’ll accrue more skill points so we can learn a greater number of abilities on a skill tree. And yes, we’ll always attempt to get more and more money just for the sake of having it. The ultimate expression of this is in the map screen that lets you select buildings to buy. Businesses are abstracted into mere buildings to be bought, with the human cost of your actions conveniently hidden away. Concepts like gentrification are even built into the game in a believable way, where the housing market responds to the properties you buy. When you get a house of apartment building, the value of every other house and apartment building goes up, which will allow you to cause a housing crisis and force the biggest trailer park on the island to sell to you. Again, the human cost of gentrification is hidden. All that matters is gaining more money for the sake of it. This is a taste of what it’s like to be a sociopathic billionaire.

Voila, you’ve ensconced yourself into a capitalism circle jerk.

Usage of satire in the game is too often heavy-handed and blunt, skewering real-world trends and shady business practices with the subtlety of a wrecking ball. But the cutscenes do produce on moment of incredibly depressing clarity. Once you beat the game and defeat your rival businessman, you not only gain a monopoly over Hawaii, but also gets an environmentalist award for running a clean company – with the caveat that, unbeknownst to the public, all your environmentally friendly policies are just cut corners disguised as a responsible agenda. And that’s it. The capitalist doesn’t take a turn for the hilariously worse, there is no fall from grace. Your unlikable CEO avatar gets everything he wants and more. This is actually a clever yet depressing bit of commentary on the state of all the shady tactics that rich capitalists use in that yes, they actually do these things, have them work as intended and get away with them with no consequences to themselves. It’s a sobering realization, but a necessary one as a first step in understanding just how big of a beast late-stage capitalism is.

Provinciano and Shakedown: Hawaii have no answers to this problem. The game merely lays out how all-encompassing unfettered capitalism is, showing us exactly what we’re up against. And it can feel deflating to realize just how much rich capitalists get away with in the name of getting ever richer. There’s a nihilistic bent to how capitalism is portrayed in Shakedown. But that just shows how all-encompassing this societal structure is, and that the antidote may take an equally behemoth force to combat. Or it’s just a window into how effective capitalism is for those who take its reins and how much it sucks for the rest of us.