With the mainstreaming of “nerd” culture, there’s been the double-edged sword of having major companies actually cater to it in full force. My stack of unplayed, unviewed and unread content continues to grow, and I continue to pile it higher. There’s always a new episode of Westworld or The Expanse for me to watch. There’s another entry in the Fallout series. I recently picked up the latest volume of Saga, realizing I never even read the last volume I picked up. Nier: Automata is now coming to another platform, reminding me that I never finished my copy on yet another device that I own—now I have the choice to buy it for another platform (where I may or may not finish it). During E3, I frequently saw trailers for games that immediately hooked me and whose names I immediately forgot.

I’ve started to feel like this sensation—a nonstop stream of stuff I’m earnestly interested in—was like binging on candy. Yes, it’s stuff I enjoy, but at a certain point, I’m hoping to break it up with something that won’t rot my teeth, or at least to give me a break from the monotony of interest. Something within this hobby to attempt to challenge me and my already pretty low expectations. If that day-to-day sensation was binging, E3 is absolute submersion, with huge, towering displays showing the games and booths as miniature Instagram-ready branded experiences around every corner. You can’t say it’s not exciting, but, at the same time, I can’t help but just feel overwhelmed and kind of depressed by this deep dive into the heart of nerddom. We’re drowning in opportunities to post-apocalyptically shoot people in the face.

Despite the international commerce at stake, despite wanting something to challenge me, my life is full of enough cynicism. I want to take this for what it is: a big industry gathering, meaning the best and worst of folks will be attending. Is there anything inspiring, anything creative, anything wonder-inducing to be found here? Let’s see.

I eagerly queue up to spend most of my Saturday waiting in line for EA Play, a full three days before E3 is even technically supposed to start. Over the past few years, the three-day industry event has ballooned into a week’s worth of media barrage—trailers, leaks, previews, leaked trailers, trailers for previews, whatever. Years of feverishly reading the latest updates, watching press streams, lol’ing at the Twitter banter and it’s all culminated to this: standing in a parking lot in Hollywood, slowly baking in the heat with a stupid umbrella hat on.

It’s hot. I’m wearing an EA Play branded umbrella hat and drinking free EA Play branded water, and frankly, I’m not above the spreading the corporate message. E3 may be like staring deep into the commercialized maw of modern entertainment, and EA may be historically one of the most unforgivingly corporate entities designed to extract as much value as possible from their customers, but hey, at least they’re making a two-hour wait on hot blacktop kinda pleasant, keeping me from turning as red as this umbrella hat. A guy next to us in line is wearing a full military getup, complete with helmet, and I don’t know how he’s not passing out. 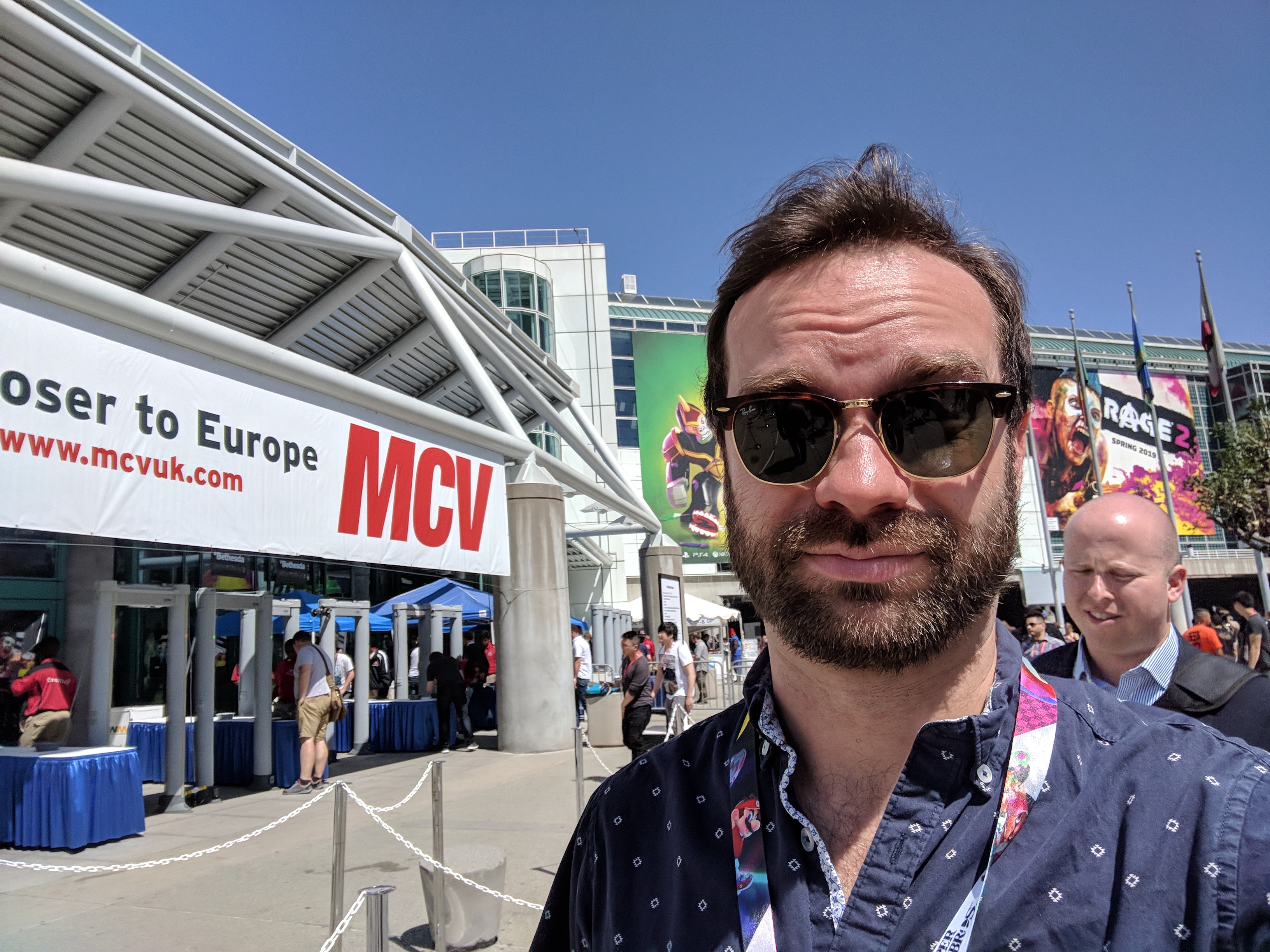 The gamer bros behind me immediately start chatting idly about how stoked they are for EA’s huge games for the week: Battlefield V, another entry in the long-standing war FPS series that others are way more equipped to get into the minutiae of how it differs from every other war FPS, and Anthem, which is basically “Destiny but with jetpacks.” There’s the requisite one-upmanship inherent to alpha males signifying how cool they are to each other, with trash-talking of games they don’t like, bragging about their PC builds (obviously, no console plebs here).

I honestly couldn’t give a shit about any game on display, so why am I here? Because I now live in this city and managed to get a media pass to this living, breathing advertisement. Because the same reasons that’d drive the other couple hundreds of people out to a parking lot in June: We want to see the new shiny thing, whatever it may be. While I’m waiting, I idly check Twitter. I see the trailer for Shaq Fu 2 has dropped and I guess it’s available to buy now. It looks unexpectedly terrible, but at least it’s got something of an identity, something I’m not sure about for Anthem.

The gamer bros start groaning the second the DJ changes up from dance music I don’t recognize to “Africa” by Toto. I don’t really identify with many of the enthused folks here—read: jaded cynical writer-type—yet we are all the same. A sea of dorky red and white hats. I look up and see a rooftop Pride party going and it looks more fun than waiting in line for games I don’t care about. Fewer dorky hats, but more colors, anyway. A guy without a ticket sneaks in line next to us. Despite the convoluted series of checks by security to make sure I’ve got a reserved spot, I see him a few minutes later inside, already with some swag T-shirt from some booth, scouring the event for his next hit.

I’ve waited in line for three hours and I’m about to play my first game, Bioware’s new sci-fi non-MMO-but-kinda, Anthem. I hope I get to shoot things with a robot suit. I finally get around a corner and see I have about another hour wait in front of me, and we’re not playing anything: It’s a chance to watch someone else shoot things with a robot suit. A 10-year-old kid behind me dabs along to the pumped up electronic music.

I spend Sunday with my kids. A bunch of new sequels get announced to existing series I’m only barely interested in.

Monday morning, I hole up in the lobby of a very expensive hotel to watch Square Enix’s press announcement video. Keith David narrates over a nonstop stream of commercials designed to stoke the excitement of fans, making me wonder why I even bothered taking the day off work when I could have just as easily watched this in between fielding work emails. I wish Childs was going to be in Kingdom Hearts 3. 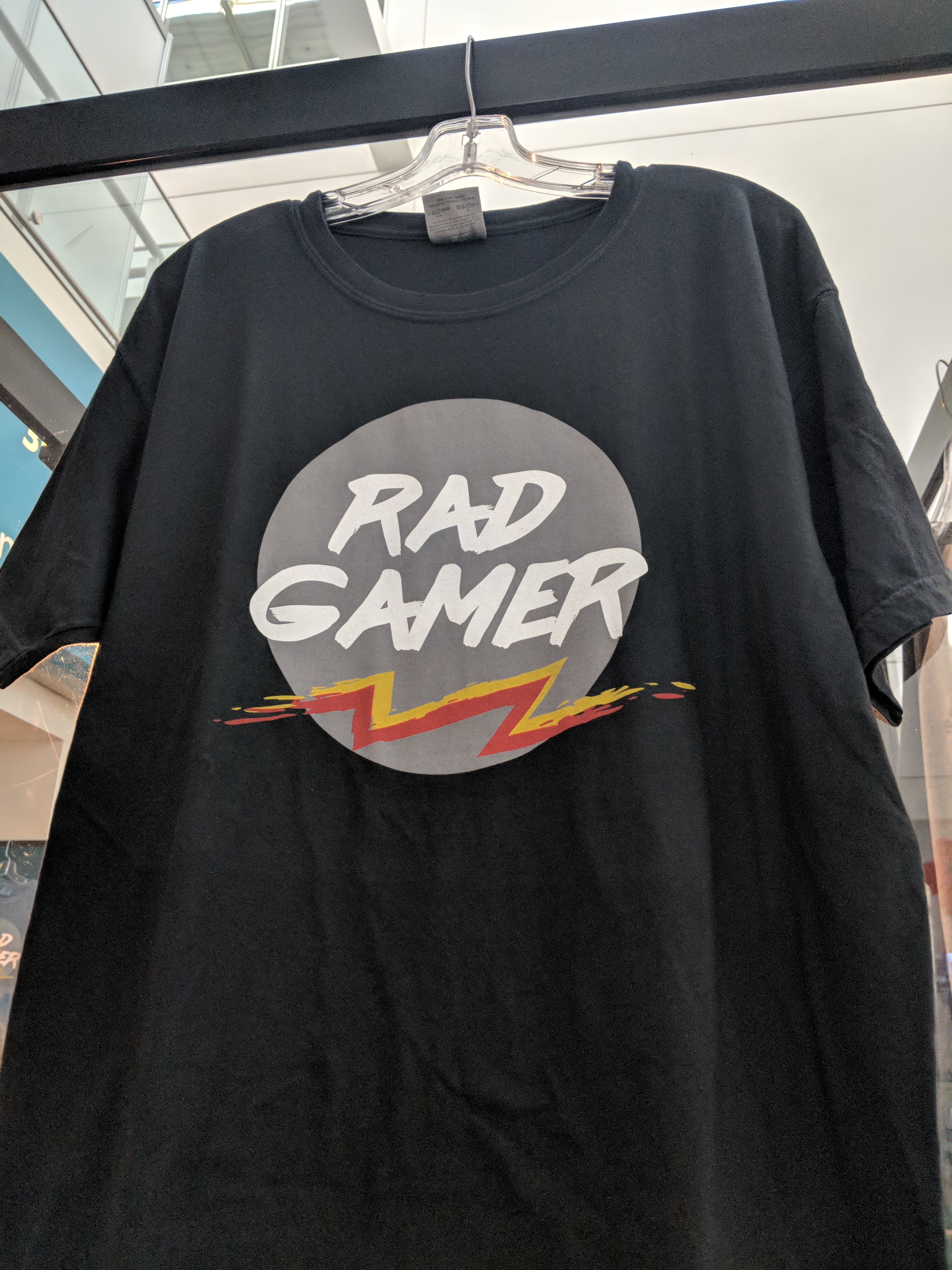 I attend the PC Gaming Show, a barrage of primarily independent games. After years of only seeing these kinds of media circuses from the comfort of a computer screen, there is some joy to be had at watching these obvious commercials disguised as WORLD PREMIERE EXCLUSIVES. As much as cynical bastards like myself may try and kid ourselves that were better than the average GameStop customer, we’re still watching this for hope of seeing a first glimpse of a new favorite thing ever. In this case, a heavily Moebius-indebted space exploration game called Sable catches my eye, all thick lines and pastel shades illustrating an explorer of an otherworldly planet. Japanese Breakfast does the soundtrack, an artist I’d only heard of in passing before. I’m listening to her music I write this. Already I’ve found a new favorite thing out of this week.

A new publisher started by a friend of mine promotes some new titles. It’s exciting in the same way watching a friend’s band open for a huge artist, that maybe someone out there will catch on to something you’ve seen already in them. Afterward, I grab beers with another Unwinnable writer, and, instead of spending another hour glued to our phones to watch commercials, we chat about our spouses, day jobs, the mania of the week.

I catch a few moments of Sony’s briefing, including Hideo Kojima’s next exploration on just how much further the line between interactive film, videogame and abstract WTF-ery can be stretched. A digital Norman Reedus uses a bottled, living human fetus as something of a power-up to avoid ghosts. Games are art or something. 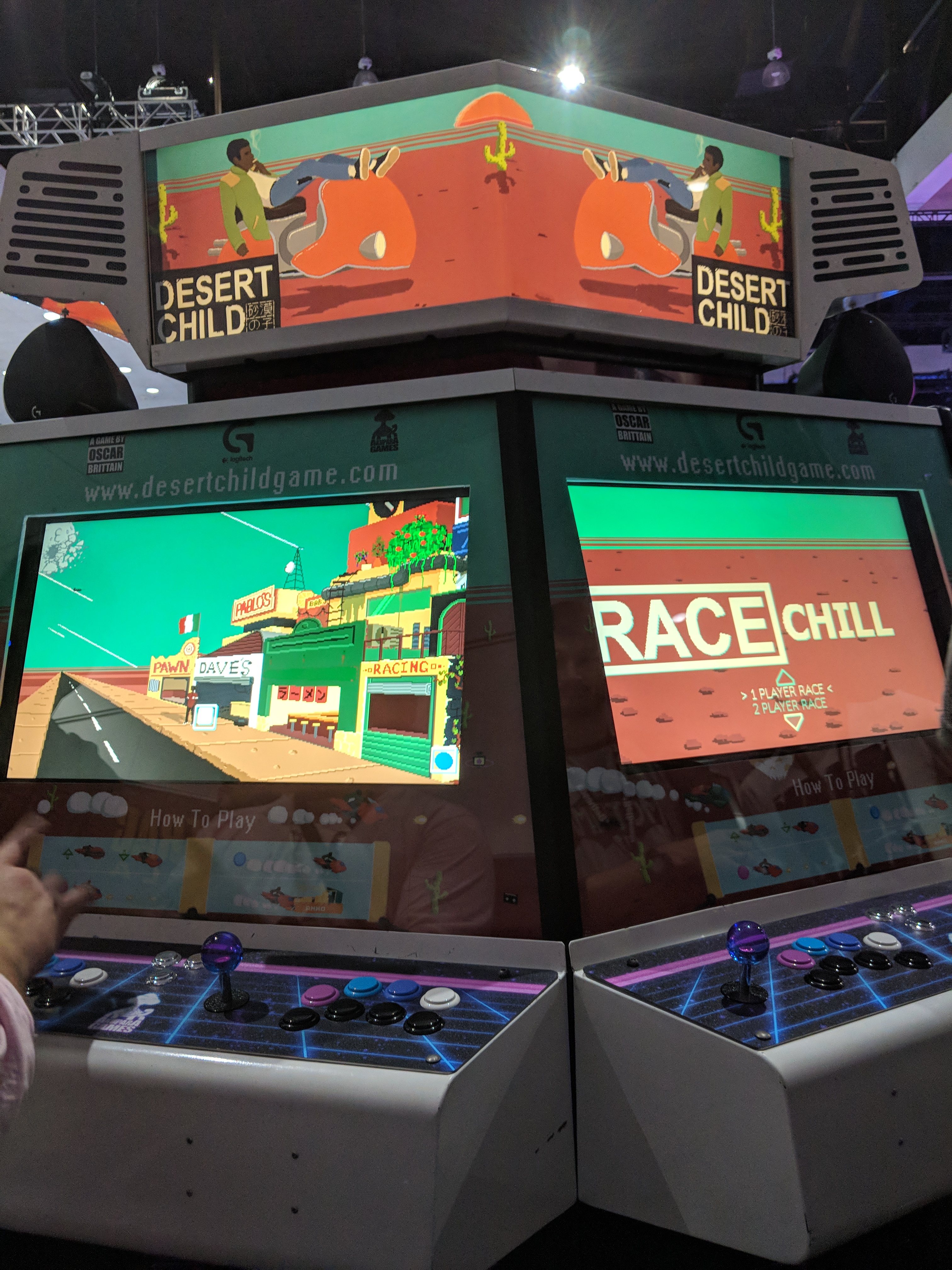 It’s Tuesday morning, the first actual day of this thing, and I’m already exhausted. After getting yelled at by security for taking a photo of a Division 2 ad a full five minutes before the show officially starts, I’m set up in the first demo on the first day of E3 for Control, the new game from Remedy. When asked to describe the game, “Brutalist” is the fourth word mentioned, so at this point, I’m in. It’s a mix of the kind of standard third-person titles Remedy is known for (starring Courtney Hope, an actress who worked with their team on an earlier game, Quantum Break), with some hints of Metroidvania-style exploration of a gigantic, mutating government building. With shades of Antichamber and NaissanceE’s architectural hostility and Annihilation’s alien rainbow palette, it’s an experience I haven’t seen over and over, which is about all it takes to get me interested. The main character’s modular gun is like a breathing inanimate object, a jittery collection of blocks in the shape of a pistol. All reds and grays, the development team references “the new weird” as a design aesthetic and Annihilation specifically by name. In a sea of known entities of this week, it stands out as a high-budget oddball, and I’m eagerly interested in seeing how weird it can get.

While getting ready to leave in the morning, I decided to wear my running shoes and they pay off given how often I find myself jogging between halls to make appointments and explore the extremely expensive branded environment. I shuffle into a makeshift office cubicle to take a look at the new chapter of Moss, a VR platformer debuting on the Oculus Rift. The first part of the game was previously released for PSVR and its subdued, childlike aesthetic had it go relatively unnoticed on release. Given the “hardcore gamer” nature of the kinds of people willing to plunk down a few hundred dollars to shut off all connection to the outside world, the VR games that seem to attract the most attention are noisiest and the shiniest, those closest to what that audience has come to expect: first-person shooters, stuff with explosions, giant fucking robots. On the flipside, a quiet platformer about a silent mouse named Quill narrated via storybook dialogue is a hard sell to your average gamer-bro.

It is goddamn charming. From her quiet wave in my direction when I hunch down to take a closer look at her, to my actual, embarrassingly audible delight at noticing a towering deer (after all, this is all shown at mouse-sized scale) taking a drink of water from a pond in the background, it’s a far cry from the gimmicky attempts at giving people what they think they want, instead a quiet, immersive experience of platforming with some fun swashbuckling with vicious little beetles.

Later, a man in full zombie makeup and costume, having spent his morning roaming the halls, stalking the living in service of promoting Dying Light 2, waits patiently for a personal pan pizza at lunchtime. 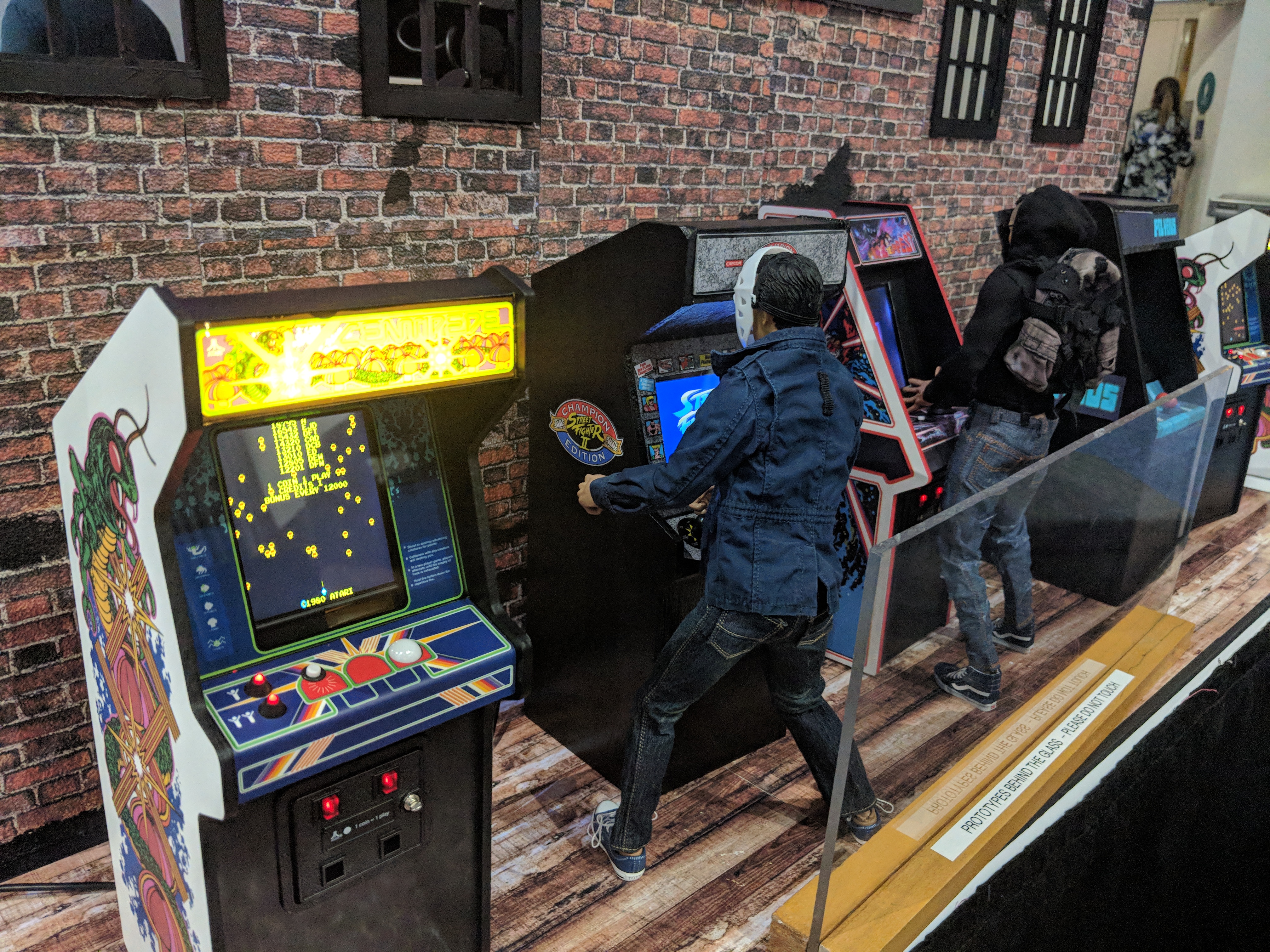 After a few more jogs back and forth across the LA Convention center to check out titles such as the latest Oculus exclusive, Defector, the latest Kickstarted Ultima spinoff, a Halo clone for PSVR called Evasion, or a pixelated Cowboy Bebop-inspired shmup called Desert Child, I’ve had enough. Roaming these halls is like living inside the most expensive videogame advertisement possible, and while it’s fun enough to wait 20 minutes for the chance to buy a Rad Gamer T-shirt or watch someone else play a videogame, I’m content to return to where I’m comfortable: Watching this cascading wave of PR bullshit from behind a laptop screen, where I don’t have to take days off work or eat more convention center cafeteria-lite food.

On Thursday, I see tweets from colleagues leaving the convention center with photos of signs posted announcing next year’s dates. On June 11-13 2019, I will probably find myself again waiting in another parking lot, wearing another stupid hat.