This column is reprinted from Unwinnable Monthly #112. If you like what you see, grab the magazine for less than ten dollars, or subscribe and get all future magazines for half price.

It is a truth universally acknowledged that humans want to fuck robots.

Unlike New Vegas, Fallout 76 doesn’t actually have fuckable robots. But it does have a robot plotline centered around doomed love . . . and is that really so different?

You first encounter Rose as a nasal, disembodied radio voice emanating from a pre-apocalypse tourist attraction called the “Top of the World.” If you manage to complete a series of quests, fighting off legions of Scorched, scorpions and other nasties, you make your way to the top of Rose’s tower (major Rapunzel vibes) and meet her in person: a modified Miss Nanny bot who leads Appalachia’s raider gangs. Tattoo-esque graffiti covers her chassis: a nautical star, a “mom” heart, a rose that says “true love,” “TNT” in blackletter script, an assortment of skulls. Red metal spikes rise over her “head” like a Mohawk. As she floats around her room with a view, her “legs” twist back and forth in a very enchanting twirl.

Rose is also a chem (drug) addict, a common trait of the raider gangs throughout the Fallout franchise. How can a robot do chems? Doesn’t matter!

After gaining Rose’s trust, she sends you into the wasteland to find the body of a woman named Rosalynn Jeffries. Through an almost-romantic recording, you learn that Rosalynn was the mistress of raider gang leader David Thorpe. Rosalynn led a raid on Charleston, West Virginia in the hopes of surprising her boyfriend with some Christmas presents. The raid failed, and she was captured. Her captors attempted to negotiate with David for her release, but instead of complying, he launched a mini nuke on a nearby dam and flooded the city. Rosalynn was killed in the process.

This is a doomed love story if I ever heard one. It’s doomed from the start – David’s married. Maybe David let Rosalynn die on purpose, or maybe she was just collateral damage. Either way, she risked her life to get him presents and he indirectly killed her to create chaos. 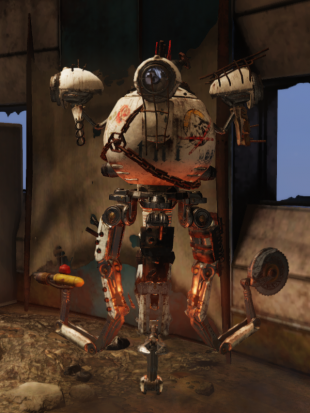 Rose-as-robot broadcasts about death so gleefully that I’d suggest sociopathic tendencies, except that she still seems to love David.

It’s unclear when Rosalynn Jeffries’ voice and personality were used to create Rose the robot. One might assume that David was responsible – but he would, presumably, have had to create her before Rosalynn’s death. But then, why would he? Did he really just want to fuck a robot? The Miss Nanny bots don’t seem, ahem, fuckable. Or did David, somehow, create Rose after Rosalynn’s death because he missed her sassy, murderous voice? Please tell me if you have the answers because I don’t know.

So which of these things drew me to Rose? Rose was my favorite character even before I’d reached the “doomed love” stage of her questline. And despite what I said earlier, I don’t particularly want to bang robots.

I want to start a band with Rose. I want Rose’s tattoos. I want to be best friends (the very premise of this column!). I want to jointly host a radio show, broadcasting from the Top of the World, to the mole miners and Scorched below. I am one hundred percent positive that Rose has great taste in music, whatever music exists in 2102 (Wyld Stallyns, anyone?). And while I don’t normally find homicidal impulses charming, something about Rose – from her tattoos that look like stick-ons to her literal metal Mohawk to her elegant hover-twirl – is deeply charismatic.

Charisma is largely based in human contact, and it mystifies me when any game successfully channels “charisma” into a fictional character. But Rose, who’s not even human within the world of the game, is more charismatic than any serial killer getting hyped on Twitter in 2019.

The thing is, my love for Rose is as doomed as her love for David. Not only is she a robot, she’s basically dead, condemned to be the AI as scripted, with memories and imperatives that function with an agenda and no actual heart or adaptation. She’s cold as ice, and it only makes me love her more. What could be more goth than that?

Deirdre Coyle is a goth living in Brooklyn. Find her at deirdrecoyle.comor on Twitter @deirdrekoala.

You Were Never Really Here