Almost as soon as I enter the Javits Center to attend New York Comic Con 2018, I find myself faced with an elevator ride to hell. I’m not talking about waiting for a lift to the show floor alongside second-rate Spidermen and Harley Quinns. No, Amazon Prime’s Good Omens has a prominently placed “activation” (in the parlance of the many PR emails I’ve received about the specialty booth) wherein one gets on an “elevator” (it doesn’t really go anywhere) that delivers passengers to either heaven or hell. Heaven is a sexy bookshop where sexy Michael Sheen presumably hangs out being a sexy, slightly flummoxed nerd, judging by the Comic-Con specific trailer just released, and hell is where sexy David Tennant keeps his sexy vintage car when he’s not sexily lowering his aviators with a sexy, smirky scowl.

If I sound cynical it’s mostly just because that’s my general demeanor – I actually had a pretty great time at this year’s iteration of the convention and my trip to hell (obviously) was fun! However, that general cynicism does force me to recognize that the reasons I had a good time exist hand-in-hand with the ones that underscore the silliness of a grown woman losing herself in a four-day pop culture immersion, especially one that wears its capitalistic aspirations so openly on its sleeve. I camouflage the ruminations on my lowbrow obsessions in the mantle of the entertainment writing and pop culture “journalism” samples I deliver each year to NYCC event coordinators ReedPop in an effort to procure a press pass. Humans like to tell themselves stories in many different ways, I argue to myself and anyone who will listen, and I’m here to see how these folks are doing it. Why not play the claw machines to win a plush version of a character from the latest Syfy franchise while I’m at it? (I do, and after three tries, I win.) 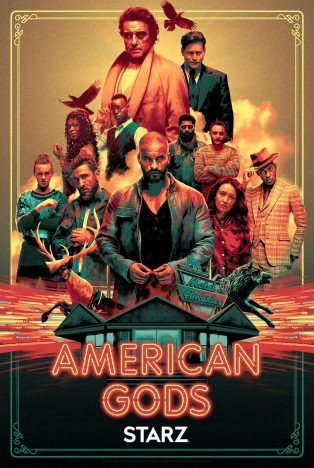 As a lapsed theatre kid who still dabbles, I also appreciate the hollowed-out, painted-plywood artifice of the exhibitors’ booths (or “activations” or “experiences” or whathaveyou). Starz set up a pitch-perfect Motel America Diner from American Gods and asked me to choose a side in the oncoming war between the Old Gods and New after handing me the softest t-shirt I’ve ever held and a metal badge that said “choose life.” I’m so paralyzed with inertia after reading the command to simply survive that I abstain from aligning myself with either group of deities and merely ask the man behind the diner counter for a shirt sized to actually fit. It will be great to sleep in.

Next door to the diner they’ve set up a clapboard house from Outlander’s Fraser’s Ridge. There, another kind gentleman carefully presses my gold-foiled initials into a leather luggage tag that might actually be vinyl. Beside him, a desk said to belong to main character Claire Fraser holds sprigs of lavender, dried petals and other herbalist’s notions in brass plates and bowls set like offerings on an altar, and I pore over them as if she herself placed them there before becoming suddenly self-conscious. Behind a tall table across the room, an “apothecary” sits dressed in a tweed vest, scrolling through his iPhone. I choose an amber bottle of perfume from several of his regimented rows – the label says “Number Six,” which according to a helpful placard from Caswell-Massey, is “America’s first fragrance” and was created in the 18th century by the company’s founder, a Scotsman. I cluck my tongue, impressed. That’s a fine detail to include in free swag for a show that’s often a love letter to Scotland.

Later in the weekend, I attend the Outlander panel along with women a decade or two older than me who are rowdier than I was my first year of college. Once we file into rows inside the theater we’re treated to a surprise screening of the first episode of the new season. Each time a beloved character appears on screen the audience howls in adoration. When Jamie and Claire indulge in one of the series’ famous sex scenes, I can’t repress my laughter – we’re two-thousand-plus people watching a pretend couple reach simultaneous climax in Madison Square Garden, for Christ’s sake – but the rowdy ladies don’t join and instead watch the scene with all the reverence for witnessing ritual. I feel even more out of control and laugh harder.

The fans at the American Gods panel also welcome the actors with screaming veneration each time they’re introduced. It’s hard to place the worship sometimes – are they screaming for Crispin Glover or Mr. World or George McFly or all three? Ian McShane’s all-father is absent, but considering the outsized presence of both American Gods and Good Omens at the convention, the crowd erupts as if Neil Gaiman is the second coming when he takes the stage. I like the way both properties play with gods and devils as capable of possessing human-like frailties, and furthermore that those personality flaws have always been part of their makeup. Perhaps, this suggests, our foibles are precisely where we were made in their image.

On the show floor, con-goers idolize with cosplay. It’s transformative and goofy, ridiculously sublime. Deadpools inherit Wade Wilson’s snark through osmosis with the mask, apparently, and prank each other for laughs and Instagram stories. Someone shouts “Avengers, assemble,” from the first-floor balcony into the lower level’s food court and every Avenger-adjacent character within earshot runs to each other to create a massive themed photo op. A father-daughter team portraying Spirited Away’s No-Face and Chihiro stop to adjust costumes outside the entrance to the main exhibit hall, and the dad’s arms snake into his black tunic where he appears to be modifying the fit of his mask from beneath. Chihiro tugs at his clothes and spins around his legs with impatient affection, ponytail weaving through the air like a dragon. Their casualness and No-Face’s odd movements from the internal adjustments make them look more like their characters than not.

New York Comic Con is a monument to hype with amusements deliberately designed to part fans from their money and/or time (so, so many lines) but as with many houses of worship, the faithful will pay their tithes. As much as I judge my own failure to completely give up the dress-up box, I would hate to miss the chance to revel in the unfettered and unscripted play I see every year or to lose the opportunity to be in sync with thousands of other people getting a sneak peek at their favorite show (or to be thrillingly out of it – there’s real heat generated by friction). It’s silly and sacred: For four days here in this glass-walled cathedral on the river, embracing glory and folly alike, we are become gods.

Deep Space Nine is More Important Than Ever