Who Is Mike is a short horror visual novel about how easy it is to compromise a person’s ever-changing identity.

The VN begins with Mike waking up in his living room with a throbbing headache, trying to remember what happened to put him in this situation. Eventually he realizes that a stranger is lurking in the room with him, and upon finding his glasses meets with the horrifying reality of another Mike standing not five feet away. The bulk of the story then focuses on trying to figure out which Mike is the impostor and what must be done with the impostor afterwards.

On the tin that sounds like a pretty basic doppelganger story. Both Mikes look the same, sound the same, even share the same memories. But what I enjoy about Who Is Mike is the way that the VN uses all of that information to establish how very difficult it can be to determine traits which are empirically true or false about a person, because those supposedly constant characteristics evolve and change from day to day.

One of the first tests that the Mikes decide to run is having their long-term partner Sarah ask both Mikes a series of questions to see if there’s any information that one of them either can’t remember or outright misremembers. Perfectly fine, we’ve all seen this bit done before in stories like these. As the player, you have the option to either tell the truth or lie in response to all of Sarah’s questions. Yet as you push on through the story, you start to realize that the lies aren’t so much explicit falsehoods as your Mike answering with unexpected truths.

When Sarah asks what Mike’s favorite animal is, one of them immediately responds that dogs are obviously their favorite, while another answers that their favorite is hyenas because they just saw an amazing TV program about them a few days earlier. This in turn causes the other Mike to immediately agree that hyenas are the best. In a few brief moments, the game has showcased the difficulty in labeling anything as a favorite because our preferences rarely remain unchanged for our entire lives.

Consider what might happen if someone were to ask you at this exact moment what your favorite restaurant might be. Do you have a particular establishment that you constantly fall back on when you want to eat out somewhere, or would “favorite” to you represent a restaurant that you specifically patronize only for special events? Is your current appetite or any sort of craving playing into your choice? What about that one place you loved to go to as a kid before you grew up and moved to a different town? There are countless things which factor into that decision, so best of luck settling on an absolute answer.

And then there are the questions Sarah asks which seem to have a very clear and inarguable answer, which shockingly bring up an entirely different set of problems. One of the first questions she poses sounds like a relatively easy inquiry: what’s their anniversary? The first Mike says February 26 with no pause, but then is corrected by the other Mike that the pair of them got together at midnight, making their real anniversary the 27th.

How do you date major events? My sister and her best friend have their own friend-iversary that they celebrate each year, but I recently found out that they don’t actually remember when they became friends. They can recall the year because they met in high school in the same class, but both admit that the actual calendar date of that first interaction is completely beyond their memory. To them, the friendship timeline begins with their oldest message to one another on Facebook, because that’s the only way they can come up with a concrete date. And anniversaries should be one of the easier hallmarks in life to remember, so what about more arbitrary dates? How long have you known your best friend? What was the first thing you did together? The worst fight you had? And how many of those events do you actually remember, versus having someone else recite their memory of those moments in such a way that you feel compelled to agree that their recollection must be the truth?

Who Is Mike challenges the notion of an absolute identity by reiterating to the reader time and again that there are no certain answers we can use to verify whether or not any specific version of you is true. Favorite bands, politics, interpersonal relationships and even your beloved go-to outfit changes from year to year. Memories fade over time, and even if you can recall them they can alter and degrade with each recollection; Northwestern University in 2012 determined that your brain doesn’t remember the event itself, but rather your memory of that event from the last time you called it up.  So even if you’re absolutely certain that SpaghettiOs have always been your go-to comfort food, maybe you’re only misremembering that. 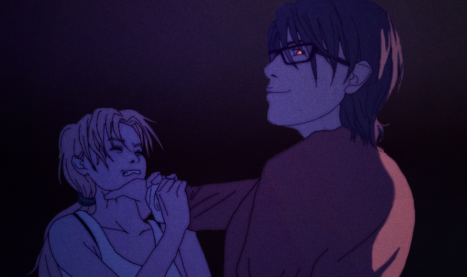 How can you know enough about yourself to ever decide which version of you existing at such-and-such date and place has the right to be called the “real” you?

It’s worth noting that the identity of the impostor of Who is Mike eventually is determined by Sarah noticing that one Mike has been wearing the wrong pair of glasses.  In short, the takeaway message of the VN is that trying to identify Mike simply by the events he recalls or the people he prefers to be around are insufficient to validate his being the real Mike. It’s an unexpected moment of salvation for Sarah and the real Mike, both of whom were rapidly running out of ways to flush out the doppelganger. That’s all that separated the real from the fake in this story; one little slip-up in the costuming which was noticed not by the real Mike, but by an outside party. And that is horrifying.

Who Is Mike is available on Steam for free. Get it.

Visual Novel, Who is Mike

The Draw of “Live”