This feature is a reprint from Unwinnable Monthly #106. If you like what you see, grab the magazine for less than ten dollars, or subscribe and get all future magazines for half price.

Dwarves. In this post-Tolkien world, you know them well: short fellows with majestic beards who live underground. They mine. They build strange machines. They dig for gold. The like axes and hammers. They tend to have Scottish accents. They’re a staple of fantasy stories.

That said, since Warhammer 40k appeared in 1987, it isn’t entirely unusual to find dwarves in space, having traded their axes for laser rifles. But what do space dwarves do during peace time? Why do they sail the stars? Deep Rock Galactic has the answer: space dwarves mine asteroids and kick alien butt.

Deep Rock Galactic, developed by Ghost Ship Games, is a co-op FPS that is equal parts exploration, resource management and combat. The team spends their time in a procedurally generated cave system, digging for resources (which function as items of value as well as ammo) and defending against waves of hostile aliens. There’s a distinct focus on teamwork and a natural tension between the risk of sticking around a given alien-filled cavern in hopes of finding ever bigger rewards.

We spoke to Søren Lundgaard, CEO of Ghost Ship Games, about the surliness of dwarves, the trippiness of cave exploration, the appeal of having a menial job to break up all the shooting and more. 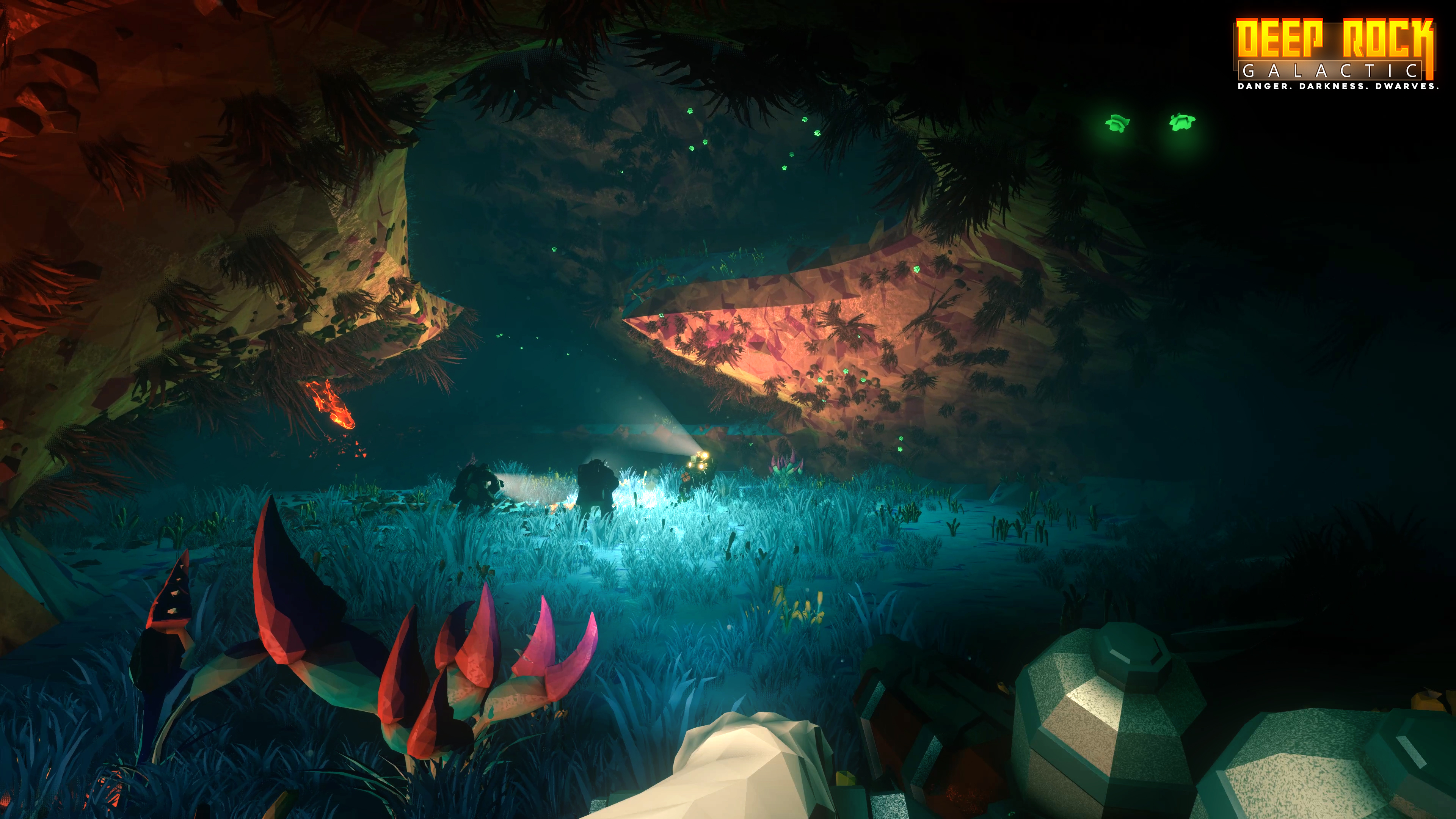 What’s the inspiration behind Deep Rock Galactic? There are not a lot of grumpy space dwarf games around, but do I see some Left 4 Dead, Aliens and Warhammer in there?

The original idea was to take the successful recipe from Left 4 Dead and mix it with procedural levels. That last part was inspired by the special experience of co-op cave exploration in Minecraft. Dwarves entered the picture when the goal became to mine for resources. There are so many cool tropes about dwarves that we inherit by placing them in the driver’s seat. The sci-fi twist came in slightly later when we need more inspiration for the actual setting. The Alien franchise has been a good source of inspiration there, but also movies like Starship Troopers and yes, a little bit of Warhammer 40K.

I wasn’t expecting the game to be so…psychedelic? I was surprised by how the voxel art style gives the game some trippy vibes. How’d you approach the visuals?

It was a very pragmatic approach. Our Art Director (Robert), initially researched some directions he wanted to explore while, in parallel, we developed the procedural terrain tech. Initially, we had quite low expectations on what we could do, but when we started experimenting, we quickly surpassed those expectations. The terrain we had on our hands was something unique and special. Our Art Director then used the strengths and limitations of the terrain tech to develop the overall direction, so characters and enemies would fit into the environment.

The trippy color choices are somewhat deliberate. We did not want to look similar to all the other brown-gray-gritty looking shooters. And with the “alien planet” theme, we had a perfect excuse to go a bit crazy with the colors. It gives us a lot of freedom now and a unique look among FPS games – at least that is how we see it. 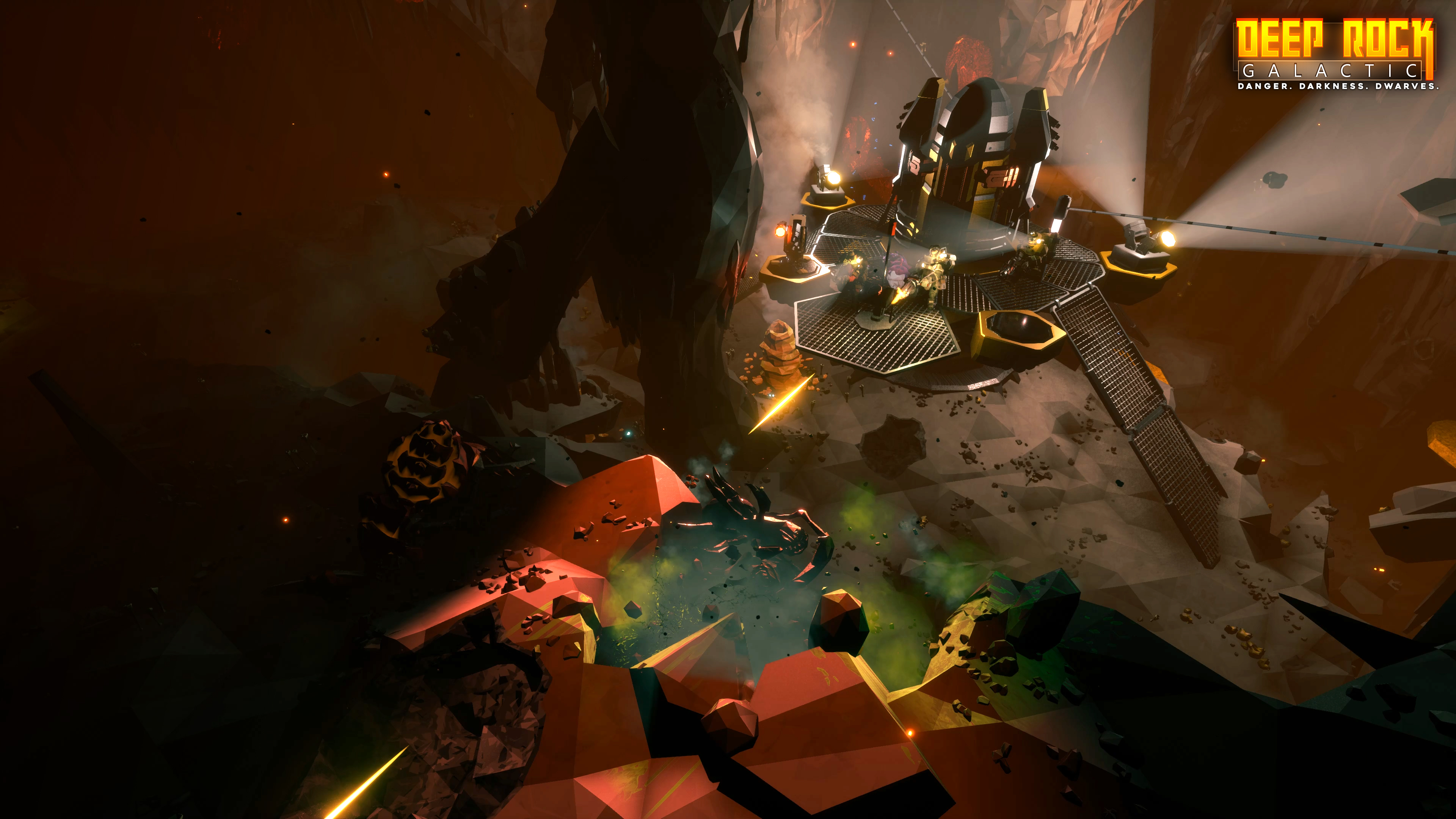 Deep Rock Galactic’s environments are all procedural and destructible. How do you approach designing spaces like that? How do you keep players on a path when they can go anywhere?

This took a lot of experimentation and iteration. When we started out, we had no idea how complex or simple the caves needed to be. Like with the art direction, we took a pragmatic approach to the design and development of the procedural systems. It’s based on a lot of handcrafted cave designs, and when mixed together with biome settings like colors, noise and set dressing it ends up looking unique. The experienced player will learn to see patterns and recognize cave structures, but, as we see it, that just helps them to become better players rather than breaking immersion.

Early on, we discussed the dig-anywhere freedom a lot. Would players just start digging and not find their way? The truth is that most will try that a few times, just to test out the tools. But in the end, players follow the directions given by them game, because that is where the fun is. It is still something we talk about improving. Like, could we create missions where the cave systems are less connected and you have to use the freeform dig-anywhere a lot more? We would have to supply the players with some tools for that, though lately we got the map scanner tool improved a lot (2D to 3D!), so we are maybe not that far away. Also, we have seen several videos of players trying to drill to the surface. Sadly, there is no surface, but that’s another possible feature we could consider in the future. 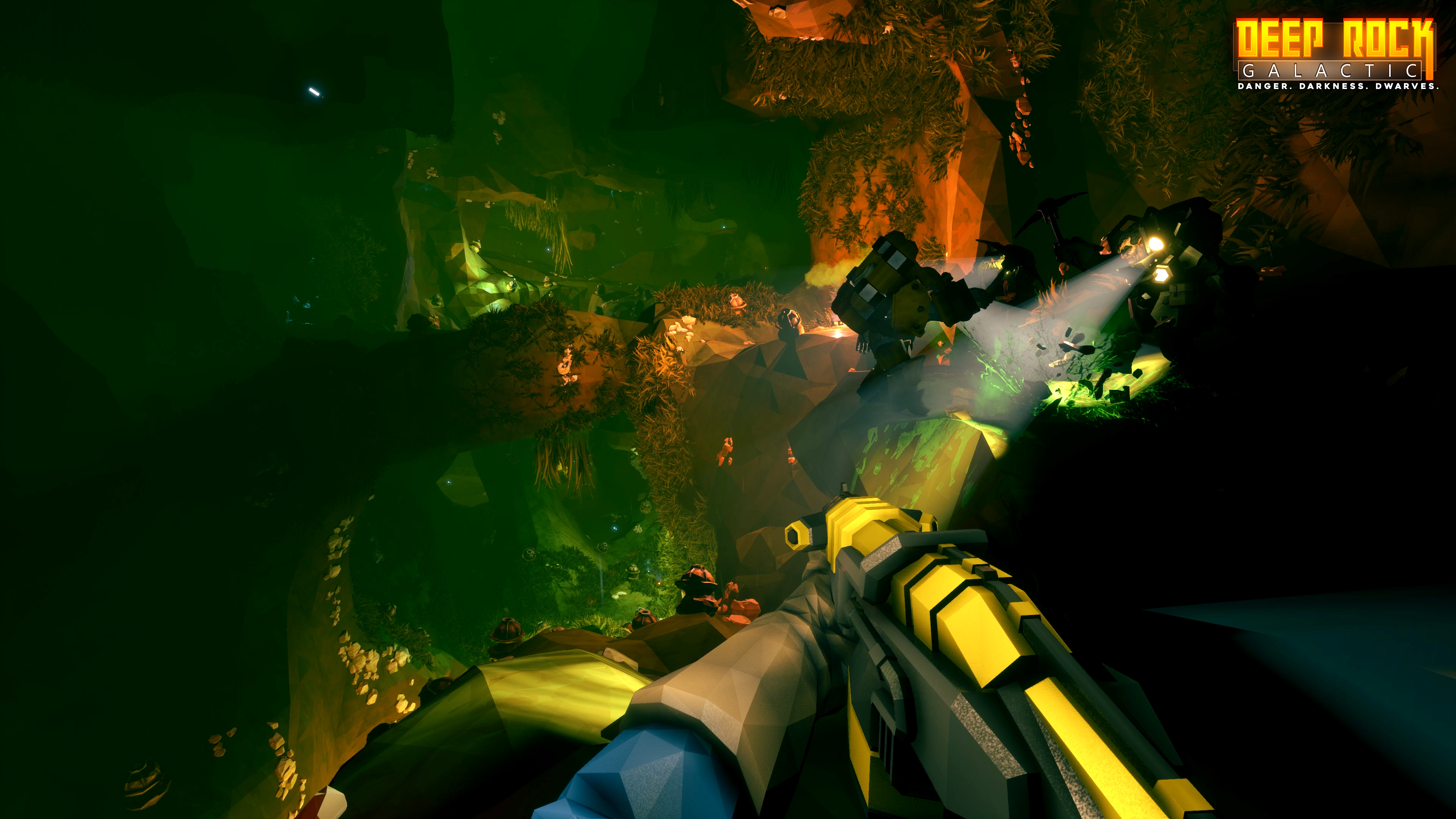 What’s the appeal of co-op for you?

As a player, it’s the social aspect. And the awesome feeling of accomplishing and experiencing something together. Of course, you can say that about many PvP multiplayer as well, but co-op games hits a different vibe, where it’s not being better than others but more about beating the odds through teamwork. There is an inherit positive vibe to co-op games, and this shines through in the community around Deep Rock Galactic.

As a CEO for Ghost Ship Games, there is also a business aspect. When we looked at the market for co-op games, and especially co-op shooters, we saw what believed was an underserved market still craving something to scratch the itch that Left 4 Dead created. There are some very successful co-op action games out there, but we were a bit surprised on how few there were and that the quality games were all very successful. We decided to go all-in on the co-op aspect both for the game itself, but also to use this to brand our company with the motto “Co-op First.” That has made it super easy to explain our mission, and so far, this has been a very successful strategy for us.

How do you go about balancing the combat, the resource gathering and the tension that comes from waiting the next wave? What are you favorite ways the game complicates the player’s goals?

This was a design goal from the very beginning and still holds true. We wanted something like 50/50 between exploration and combat. One critical component for this has been the design of the classes. All of them can do well in both combat and traversal. For example, the Gunner not only has a big minigun, but can also shoot zip lines so teammates can cross chasm or reach higher points. The gameplay around throwing flares and lighting the caves was in the game from the very beginning and is critical to add depth to the exploration and mining part.

Combat gameplay is well known and here it’s more a matter of following good FPS practices – there is a certain feature set and level of polish that you need to hit. But exploration and mining has been more unknown territory for us, especially in regard to co-op, so we have made a conscious effort to keep a significant part of the development focused on that aspect.

One example of a feature that mixes exploration and combat is the Nitra mineral. You need Nitra to refuel ammunition for combat, but you’ll need to devote some time and effort to explore and mine the Nitra. Some of the most fun and tense moments happen when the team just needs a tiny bit of Nitra to call in a supply pod and is then hit by massive wave of enemies. Now what do you do? Fight it off with what you got (for some players, that might mean whacking enemies with your pickaxe) or have someone scouring for Nitra while others do their best to distract the wave of enemies. 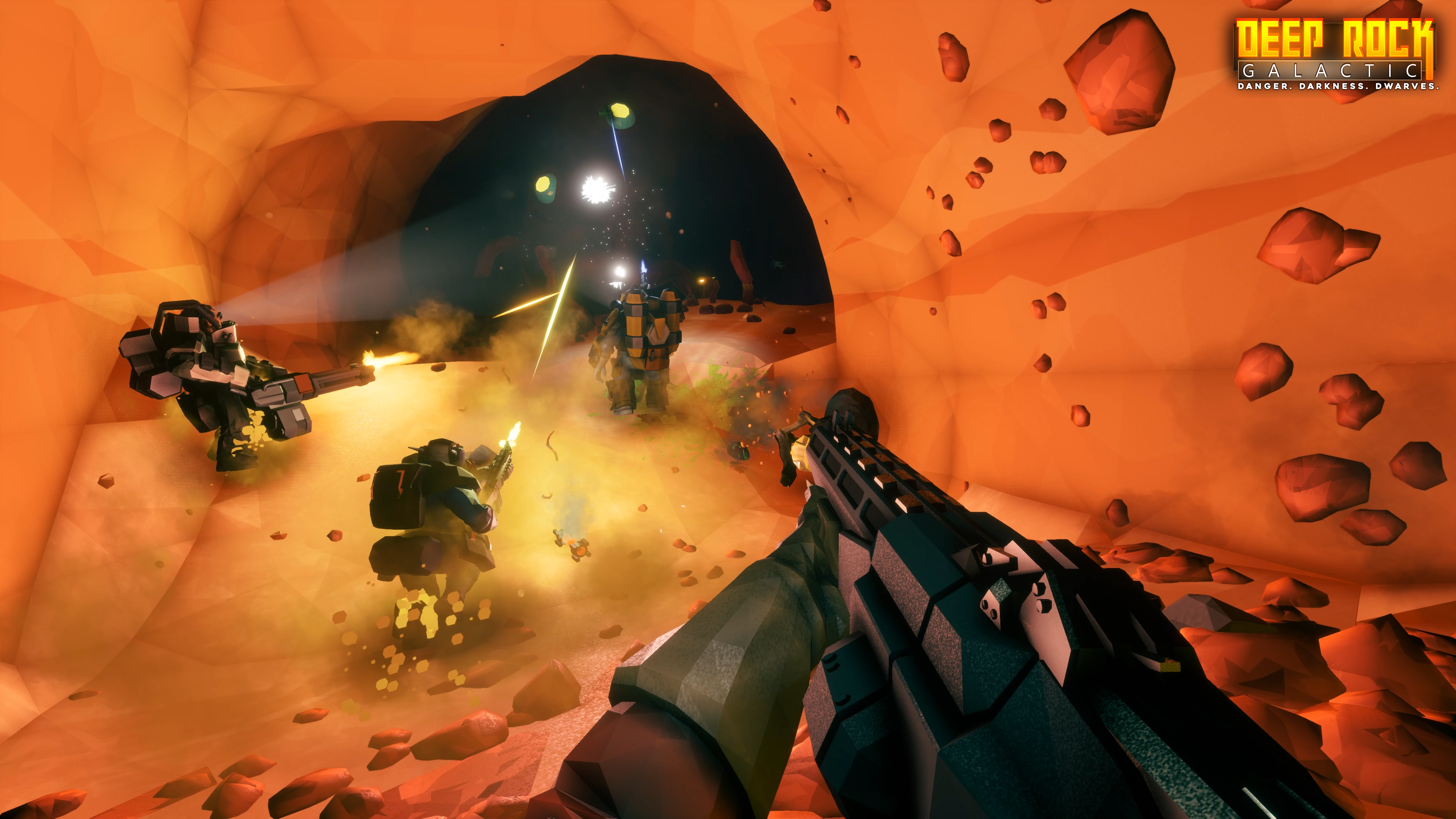 Friendly fire is a thing in Deep Rock Galactic. Do the dwarves really dislike each other that much? What’s your reasoning for committing to that particular complication?

Part of the vision for the game has always been to create a feeling of danger (hence our Danger, Darkness, Dwarves line). It is quite dangerous to go cave spelunking in the real world and doing so in a cave with hostile alien monsters should be even more dangerous. On top of this, we wanted to players to think about the team and care about their teammates. Beforehand, we had looked at a game like Helldivers and seen that it is possible to include friendly fire in a co-op game without creating a lot of friction among players. This led to the decision of including friendly fire and we believe it’s part of building a stronger sense of camaraderie among both the players and their perception of the dwarves.

For us, it was an easy choice. We knew the capabilities of both Unity and Unreal, and since we had networked FPS game at the core, we knew that we would have something up and running with Unreal faster than with Unity. Also, our art team was craving some of the delicious art tools in Unreal and our coders really like their C++ code! On top of this, we unexpectedly received a lot of support from Epic in terms of invitations to conferences and game promotion. All in all, it has been the right choice for us and we would use it again if it all started over.

Deep Rock Galactic is currently in Early Access on Steam. A new update is scheduled for later this month. To learn more about the game, check out the official site.