There is no good way to start this, because there is nothing good about this.

In 1997, Larry Nassar, National Medical Coordinator for USA Gymnastics (the national governing body that selects and trains the U.S. Olympic gymnastics teams), became a faculty member at Michigan State University’s College of Osteopathic Medicine. He remained on the faculty until September 20, 2016, when he was fired following a report by The Indianapolis Star about complaints of sexual abuse within USA Gymnastics and a criminal complaint filed by Rachael Denhollander alleging that Nassar sexually abused her during medical treatments while she was a student-athlete at Michigan State in 2000. By the time Nassar was sentenced on January 24, 2018 to 40-175 years in prison after pleading guilty to seven counts of first-degree criminal sexual conduct with a minor, more than 150 women had stepped forward with accusations that Nassar had assaulted them. (Nassar had already been sentenced to 60 years on federal child pornography convictions.)

According to another 2016 lawsuit, when Nassar joined the MSU faculty in 1997, he had already been sexually abusing an eventual Olympic medalist for three years.

In February of 2017, MSU Gymnastics coach Kathie Klages was suspended and announced her retirement after accusations that she discouraged athletes in the late 90s from coming forward with accusations of sexual assault against Nassar. In August 2018, Klages was charged with both felony and misdemeanor counts of making false statements to police.

In March of 2018, the former dean of MSU’s College of Osteopathic Medicine was charged with felony misconduct in office and fourth-degree criminal sexual conduct on charges of sexually harassing students and possessing pornographic images, some of which appeared to be of MSU students, on his computer.

On January 24, 2018, MSU President Lou Anna Simon resigned in an extraordinary letter in which she described the public outcry against Nassar and the university as “politicized.” Tensions between abuse survivors and Simon’s interim replacement, former Michigan Governor John Engler, have become public. The University agreed to a $500 million settlement with abuse victims, but those payments have been suspended by the University on at least one occasion. 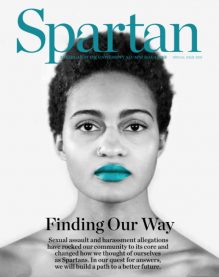 When we put our faith in institutions, it is because institutions give us the ability to participate in and draw meaning from something larger than ourselves. As aggregates of talent and resources, operating under a codification of values with at least the potential to draw from the past and survive us into the future, institutions are capable of tremendous good. But, as is almost inevitable, when the preservation of the institution and the good it has done and should continue to do outweighs the well-being of the individuals under its care, institutions are capable of unfathomable harm.

And when we allow the value we draw from an institution—a degree, a sports team, legacy, or nostalgia—to cause to seek to minimize that harm, we are complicit in that harm.

It is not likely that I will be buying MSU apparel in the foreseeable future. I communicated to the student with the unenviable task of making alumni fundraising phone calls that I would be making no donations whatsoever. These actions are meaningful, but they do not even approach being sufficient. Institutions are not things whose virtue can ever be properly considered in terms of the individual. If the University is to be redeemed, it will be because of the work of the student newspaper, The State News, which published the “teal” issue of the alumni magazine attempting to engage issues surrounding Nassar’s abuse, but which was scrapped by Interim President Engler in favor of an issue that proclaimed MSU as having emerged “stronger, safer, and more competitive” from “the most difficult challenge in its history.” It will be because of organizations like Reclaim MSU that combine the voices of students, staff, faculty, and alumni to advocate for change. It will be because the Faculty Senate reasserts its proper role in governance alongside the President and Trustees.

We are often (self-servingly) warned against discounting an entire institution as the result of “a single bad apple.” This is good advice, if not in the manner it is usually offered. If the value of an institution lies in its capacity to exceed the limitations of the individual, then holding on to the values of an institution must look beyond the individuals who run that institution and the accidentals they often seek to preserve. As “the pioneer land-grant university,” Michigan State University was a model for the creation of state-funded colleges that sought in the mid-nineteenth century to extend postsecondary education into agriculture, engineering, and the practical sciences with the aim of making college more than a place for the children of the wealthy to fortify their social standing. If Michigan State University has value, it is more likely to be found in its Extension program, which offers educational, agricultural, and community resources and opportunities in every county in the state of Michigan, than in its much more visible, much more accidental athletics program.

We are not our institutions. Our institutions, at their best, are us, and when they fall irreparably short, we would do well to remember what they were for, discard the accidental, and start again.