As a genre, the roguelike has been scrutinized, prodded at and mangled to the point where it’s pretty much an amorphous term today. But even with plenty of videogames loosely referred to or influenced by the genre, there are still aspects of roguelike titles that make them instantly recognizable: the thrill of permadeath, the procedurally generated levels, and its ruthless difficulty. And for the game that spawned an entire genre—the eponymous Rogue—it was also the scratchy, ASCII-based graphics, in which objects, characters and environments are depicted merely via characters and symbols like the “@” and “#”. What’s fascinating about the genre is how these elements work so much in sync to tease the imagination, bringing to life a bustling and believable ecosystem of characters in otherworldly scenarios.

This language of roguelikes has been cleverly employed by Sunless Skies, a game about navigating the skies with a spacefaring steam locomotive. As the industrious captain of a small and hardy crew, you can choose to etch an honest living or embark on an endless pursuit of fame (or infamy) in a boundless skyscape. These adventures are set amidst a backdrop of nebulae and other inconceivable wonders; perhaps you’ll spot the tendrils of a gigantic, noxious foliage, or be caught in the immense howls of a passing cyclone. Yet, what makes these experiences so dynamic isn’t the sheer spectacle of graphical fidelity, like that of Far Cry 5 or Witcher 3, but the unassuming combination of tranquil scenes and breathtaking prose. Traversing these uncharted spaces can be treacherous however, and it’s the elements of roguelikes—the threat of frequent deaths, and the unpredictable, randomly generated environments—that makes the journey feel like it’s truly fraught with peril at every turn. 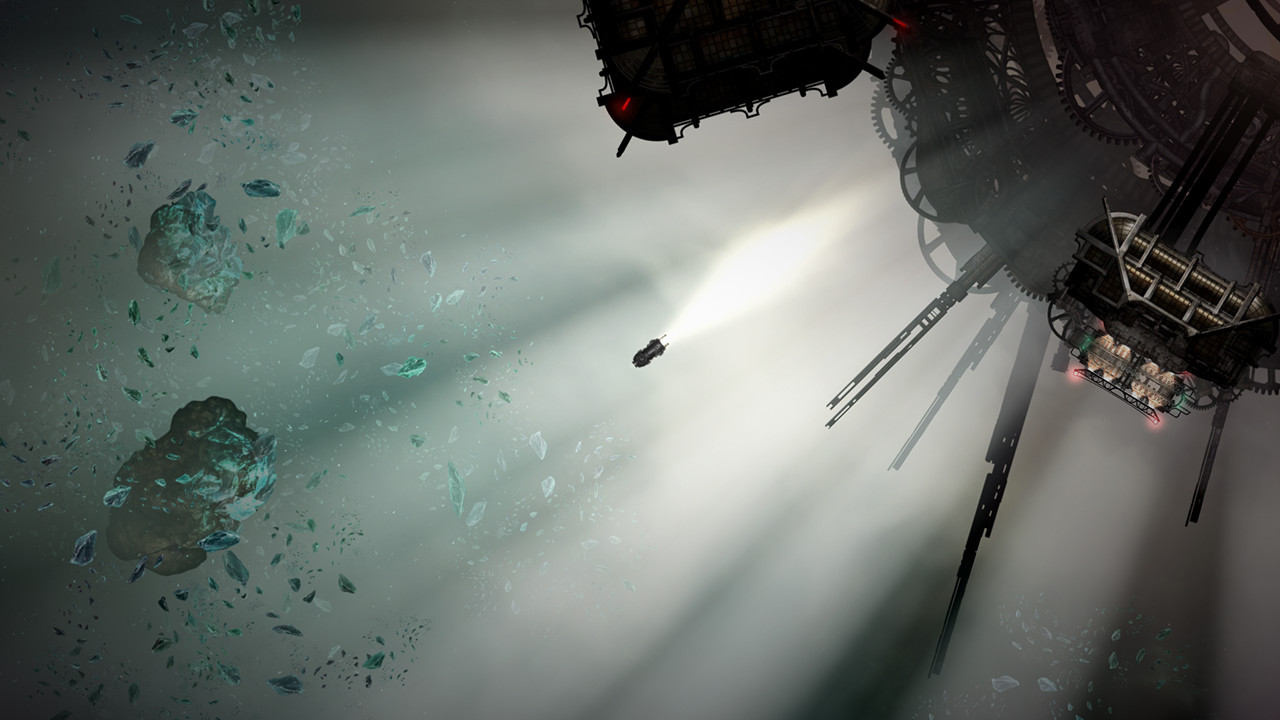 Take for instance the looming threat of death. Celestial abominations of unimaginable proportions either lay dormant in the skies or had been laid to rest by centuries old battles. Yet, chancing upon their empty husks—some of which are so massive that one screen couldn’t contain them—is still a terrifying encounter. This is exacerbated by how fragile survival can be in this universe; on top of an already brittle locomotive, supplies and fuels are often rapidly depleting, while a stress meter threatens to derail your expeditions if your crew is too worn out. These conditions work in tandem to deliver heart-palpitating tension, heightening such moments whenever any of them sunk to dangerously low levels.

Making the experience even more “roguelike”, so to speak, is the game’s emphasis on having a lineage of captains who will take charge of the expedition after the demise of the previous leader. But this is by no means a do-over; prior decisions affect the circumstances new captains will soon find themselves in. Failure is frequent, but it’s by no means the finale—and that feature is usually a rarity in more narratively driven games. What this translates to for Sunless Skies then, is that this evolving narrative offers a much more singular experience than most modern role-playing titles. You can support the efforts of the authoritarian Empire in one legacy, and cope with the ramifications of that captain’s choices as a proletarian rebel. It may seem unimpressive on a superficial level, but experiencing the plenitude of its fascinating prose means that immersion does require a degree of active participation from the player, beyond just clicking buttons and pointing at things on the screen. 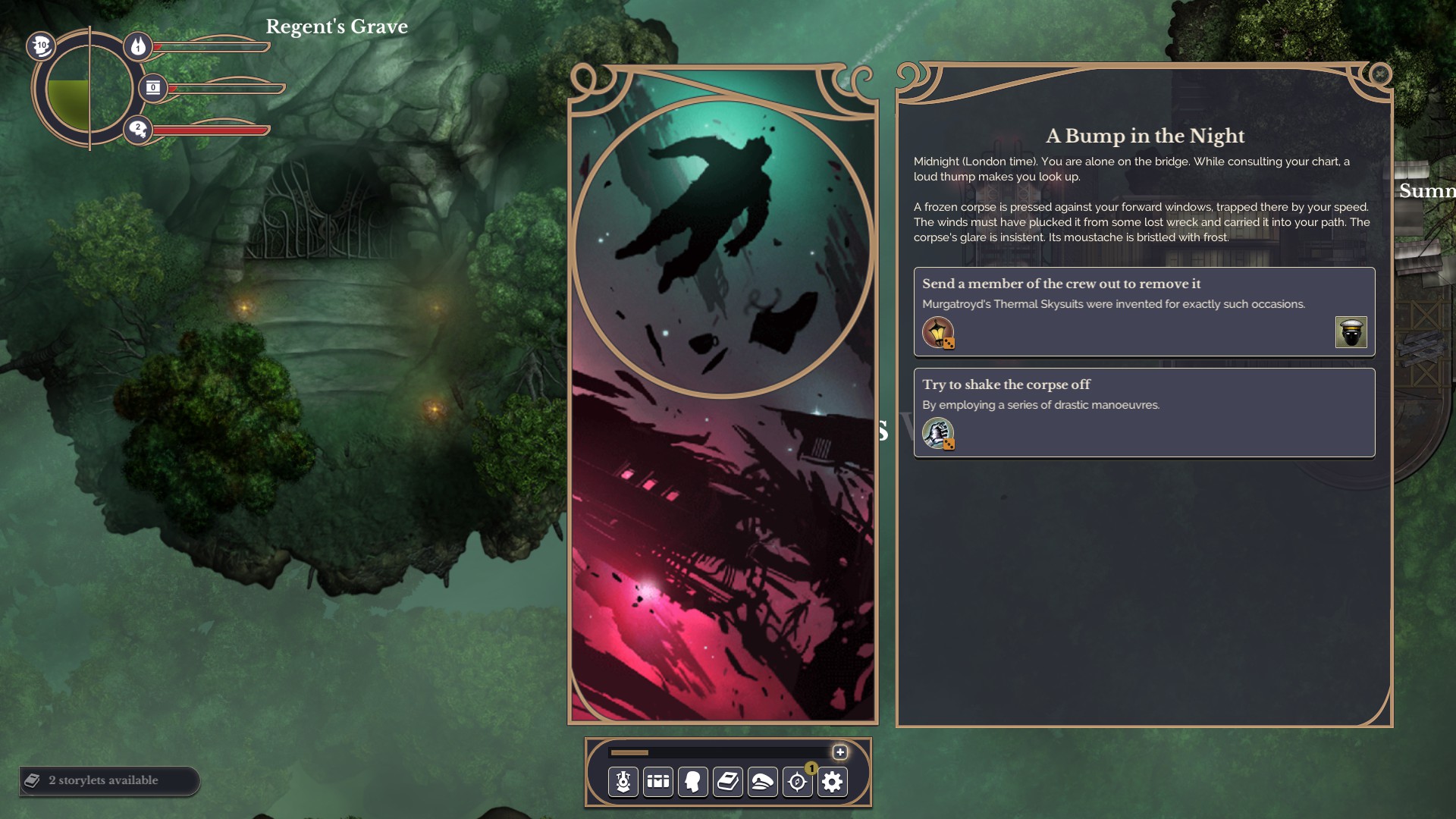 I don’t mean to be pedantic about genres and their differences, but I really do love how these roguelike elements convey the harshest qualities of Sunless Skies. They carry the relentless trials and tribulations their protagonists face in nautical fictions and literary voyages like Moby Dick, The Rime of the Ancient Mariner, The Cantos and The Odyssey. Like its predecessor Sunless Seas, Sunless Skies continue to inspire awe, fear and wonder in these capricious excursions. These adventures, however, are also punctuated by more contemplative moments of isolation. As I steer the locomotive towards far-flung ports, these travels gesture at the vast, unfathomable magnitude of space. It’s not as limitless as the size of 18 quintillion planets, but it occasionally takes on the slower, spacefaring qualities of the infinity of No Man’s Sky. The narrative pacing of Sunless Skies may lose some players, but those with patience to spare may find that their imagination, aided by the captivating scenes Sunless Skies paint in abundance, will continue to fill their heads with stories about endlessly riveting adventures.