Is dead, is dead!

Viking culture and its mythology are strikingly hard concepts to pin down. This is true to certain extents of any ancient civilization, but the lack of written records of Scandinavian origin means scholars must rely heavily on archeological evidence to piece these people’s lives together. Many popular ideas about these seafaring raiders are 19th-century inventions, while most historical records are of Irish or Anglo-Saxon origin. This makes the Vikings particularly malleable on the cultural stage, where they can be stretched and molded into a form most suited for the required role.

God of War is the latest game to adorn itself in Norse trappings. The series has bid farewell to the Olympian heights and Aegean shores from whence it made a name for itself. Kratos, the ever-furious protagonist of these adventures, now continues his role as a bad father in a new land. If the goal is to grant greater nuance to a character who has up until this point acted as a one-man murder factory, then what better place than an ever-shifting popular mythology?

The events of the game barrel towards a conclusion that involves the death of Balder (Baldr), the first sign of the Norse destruction myth Ragnarok. Both Kratos and his son Atreus take on the roles of Hodur (Höðr) and Loki respectively. Atreus is revealed to really be the god Loki and is still responsible for revealing Balder’s weakness to mistletoe. Kratos lands the killing blow in lieu of Hodur, the blind god who in the mythology is tricked by Loki.

Kratos is almost too perfect in this guise. While in myth the god was actually blind, here he’s metaphorically so. Early on, the game sends players to the Elven realm of Niflheim. There they find light and dark elves at war with each other. In response to Atreus asking if they should intervene, Kratos responds it’s none of their concern. He then proceeds to kill any elf that gets in his way. Empires were and continue to be built on the rationale that local affairs are inconsequential. If a motorway needs to go through historic land, so be it. Your game’s use of Icelandic being described as offensively lazy by actual Icelanders doesn’t matter, as long as it’s suitably immersive. 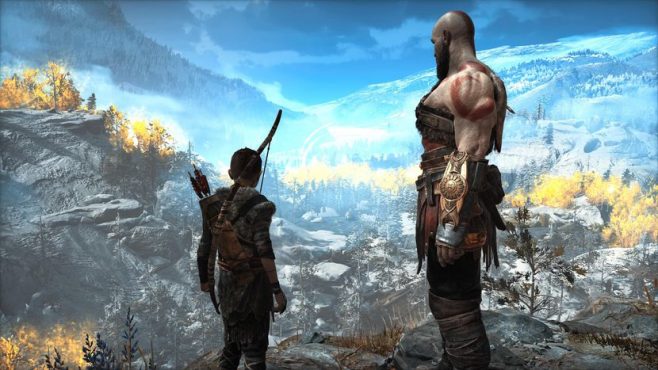 Kratos plays the role of a colonizer throughout. He never has qualms about asserting his dominance over any of the people he encounters, primarily through indiscriminate violence. His desire overrides everything else. This is all he can be. He’s the result of treating other traditionally white cultures as a unified ethnic group, so that American developers don’t have to feel bad about using them as narrative tools to sell their games. Look at the original God of War. David Jaffe wasn’t crafting a nuanced take on Greek myth. It’s always been set dressing in service of the violent wish fulfillment that drives profit.

God of War is just the latest example of how outside narratives are at the mercy of the established Western studios. Revealing that Atreus is actually Loki makes the god inextricably linked to Kratos in these games. It’s a stamp of ownership by a studio, who has given themselves the license to do whatever they like with this mythology. Balder the bright has become Balder the thug.

The colonization of myth isn’t a new phenomenon. At the turn of the 19th century, Loki was seen as an outright villain or evil god by some Western writers. This viewing glosses over the more flexible role he seemed to play among the pantheon, but it was a useful tool. As in American poet Henry Longfellow’s eulogy to the Swedish poet Esaias Tegner (Tegner’s Drapa) in 1849, a villain is needed to end the Viking age of gods, so that the mythology could be led into Christianity.

This might seem like a lot to lay at the feet of Santa Monica Studio, who made an enjoyable enough big-budget action game even with its problems. At the other end of the scale, we still have to contend with white nationalists fetishizing and co-opting Viking iconography to further their racist beliefs. If we let the seemingly smaller aspects go unchallenged in our entertainment, we’re laying a foundation of acceptability that’ll give the worst kinds of people a platform to stand on.

The New Godzilla Trailer is Awesome and Sublime