Buzzfeed, the internet’s foremost expert on personality quizzes, has helped many folks idle away mundane afternoons at the office, as we discover ourselves via tests like “What Kind of Bean Are You?”, “What’s Your Zodiac Sign’s Ice Cream Flavor?”, and “What Type Of Fall Sweater Are You?”. Realizing that my spirit animal (food?) is a pinto bean had definitely transformed my outlook on life, and the indie title, Cosmonet, is tapping on such observations to steer its narrative flow.

Set during the alternate reality of the 1955 space craze that gripped the Soviet Union and United States, you’re Lena, the sole avian biologist on a space station burdened with the thankless task of researching the flight of birds in a zero gravity environment. Watching your confused feathered friends’ attempts to flap their wings without the opposing forces of gravity was fun, but the excitement of floating about in space was wearing out after three months. Aside from the internet, there really wasn’t much in terms of entertainment, so binging on personality quizzes became your newest hobby—a mindless distraction from the drudgery of work. In between quizzes, you chat with friends and family, check in on your birds, and consider the practicalities of getting a new job. 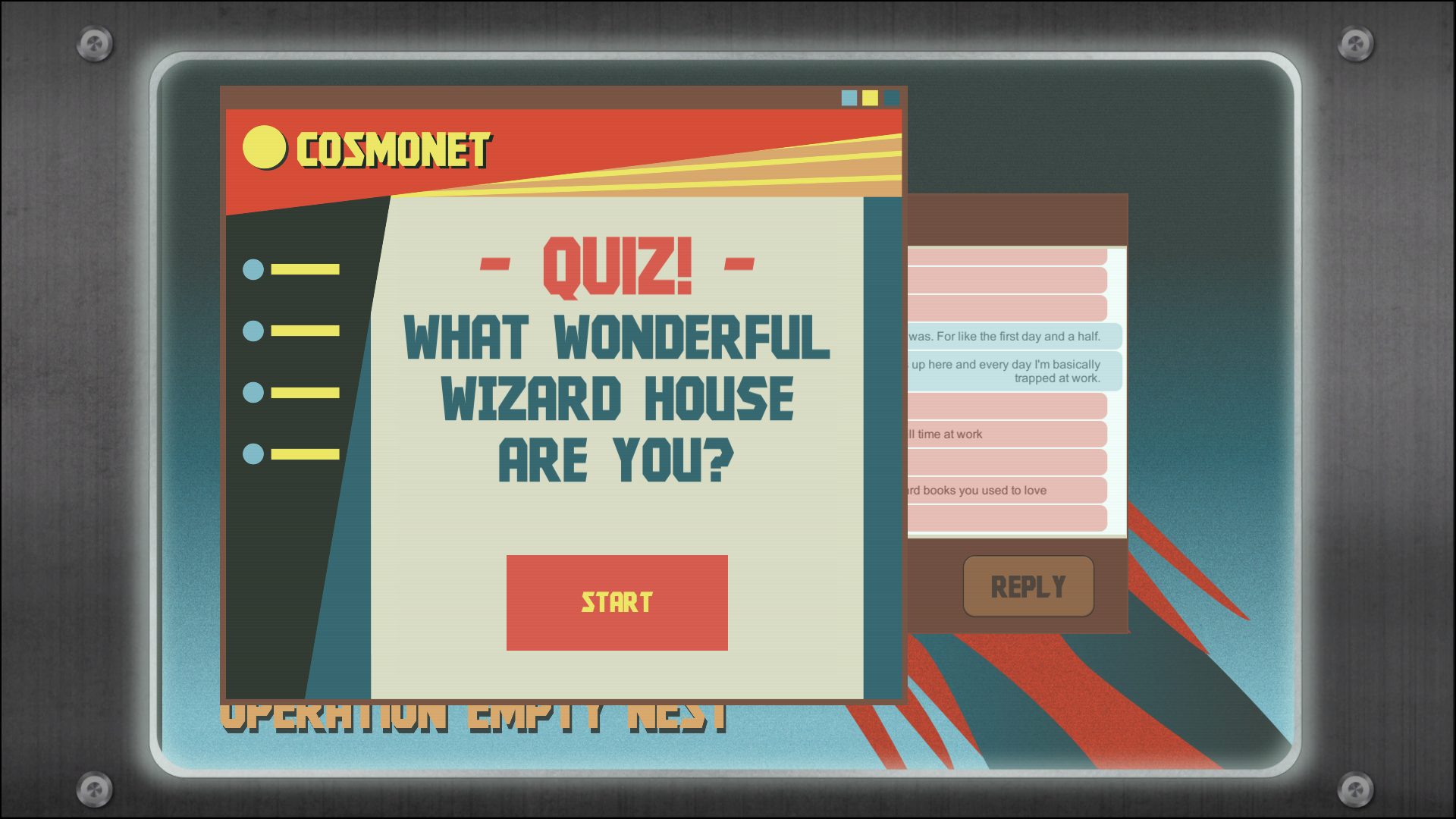 It’s not immediately obvious, but Cosmonet makes mental notes of Lena’s personality through these quizzes, which influence her dialogues and even impact the conclusion of the avian research. I soon discovered my affinity to the fictional Wizard House of Snakego, whose individuals were described as “creative, ambitious and fiercely independent.” As a result, this version of Lena was commanding and confident in the way she managed her relationships. It’s as if the Buzzfeed bean quiz earlier, which told me I was “great alone or made into refried beans”, is a prophetic reflection of my personality—a wildly preposterous but hilarious suggestion. This humor is, in fact, the game’s raison d’être, with these ludicrous quizzes highlighting the hellish monotony of corporate work against the verisimilitude of being a cosmonaut. There’s nothing quite like vengefully clicking through the options of a quiz on making a career switch while you’re marooned on a space station, as anger and disappointment gradually coalesce in your thoughts.

These quizzes are unexpectedly inventive, too. The activity places some distance between the player and Lena, since we have little insight into how Lena will respond to her circumstances; I mean, it’s hard to tell what choosing a gargoyle as a mythical pet would have meant for her. This separates us from the dissonant sense of messiah complex that many role-playing games allow us to have, which stems from the impossible acumen of knowing how our dialogue and actions would shape the environment and the world. Our stakes and investment feel minimized when we make pivotal, climatic decisions, like how we instinctively understand that our chosen faction in Fallout 4 will eventually dominate the wasteland.

“If the player has made Lena highly idealistic, her reactions and problem-solving strategies will be different than if she is highly practical,” shared the developers on their project’s Indiecade page. Through its quizzes, Cosmonet turns the relationship between action and consequences into an implicit one, which makes the game’s whimsical conclusion even more unpredictable and gratifying.

Cosmonet is accompanied by an equally quirky companion piece called From Ivan. As a Human Resources Manager, you serve as the face of the amorphous management team, tasked to pretend to care about your colleagues’ well-being and maximize their productivity by sending them cheesy greeting cards. What sort of cards should you give a co-worker on the death of his beloved pet cockatoo, so that he can get back to work as soon as possible? From Ivan offers a more incisive look at amoral corporate practices, but like Cosmonet, it’s also your ambivalent choice of greeting cards (and the occasional stamps) that shapes your character’s relationship and decisions. Both titles fix the strange disconnect between the heroes of role-playing games and their worlds—perhaps a feature more games can consider adopting.

Indie Games for the Overworked and Underslept