At this point, my side hustle occupies enough hours of my week that it could become my main hustle, but I’ve still got my day job charging full force from 9-5. And of course there’s, you know, life stuff that needs to get done, a pupper that needs to be walked, basic oral hygiene to uphold, dishes probably. In short, I don’t get a lot of sleep. It’s apropos I’m writing this at midnight, drunk on tryptophan with a belly full of Thanksgiving turkey.

There’s so much that needs to be done, my brain never stops calculating it, even after I lay down at the end of a long, long, oh dear god long day. In those moments, my eyelids might as well be magnetically repelled from each other, and what does a person who writes about games do when they can’t sleep? Play more games, of course! So, if you’re like me and seem to be able to tackle everything but sleep tonight, at least you’re not alone; these titles are right there wrestling with you.

Yet Another Exhausting Day

The beginning of Yet Another Exhausting Day echoes a sentiment I know entirely too well: “It’s been such an exhausting day. You are so tired yet you don’t want to sleep.” You play a character who’s too exhausted to be asked to move their body properly, directing her by inching along like a caterpillar or flopping left and right. Apparently, even gravity’s asleep at this hour, as you can scoot along the walls, gathering coins and keys to progress through each room of her apartment.

Along the way, you destroy evil sentient vacuum cleaners and potted plants that block her way with a headbutt that takes no prisoners. Pillows scattered about the apartment beckon you, literally attracting your head like a magnet and depleting your senses bar as you drift closer to an unwilling sleep. As someone whose desk is located precariously close to a pillow at this moment, I’m all too familiar with its pull. But it’s the game’s final level that triggered the most déjà vu: a giant, glowing smartphone dotted with notification icons that must be smashed, one by one, before you can fall into a peaceful slumber.

Yet Another Exhausting Day is an updated version of an entry of a similar title for Ludum Dare 39, and an extended version is currently in development. Given how much of myself I saw in the demo, I’m excited to see the idea expanded; even with its short length, Yet Another Exhausting Day provided some nice commentary on the sleeping habits of our “always-on” generation. 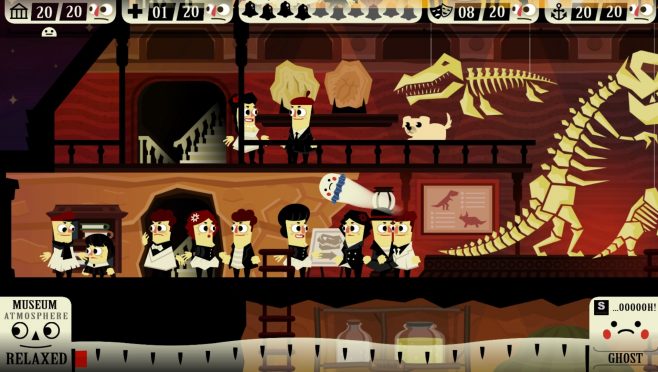 Halloween may have come and gone, but I’m still sneaking this one onto the list because even ghosts get sleepy. All the little ghost in Haunt the House Terrortown wants to do is get a good night’s rest, but the buildings near his belltower are overflowing with partying living souls who insist on keeping him up all night. How inconsiderate! What else is there to do for a ghost but scare them silent? Deadly silent in some cases.

While you can let loose the cutest little “boo,” most of your terrifying presence comes from possessing the pianos, dinosaur skeletons and other household objects scattered around each of four buildings. Each item adorably takes on your pale skin and rosy cheeks when you inhabit it, and there’s a lot to possess, so I don’t even want to think about how many art assets this game has.

When the guests are relatively calm, you’re limited in how much you can manipulate your surroundings. Sure, you can rattle paintings or inch a bottle along a desk, but the real scary stuff isn’t unlocked until there’s a bit of panic lacing the evening. As the hysteria grows – indicated by a bar at the bottom of your screen – you can articulate limbs on statues or make dinosaur fossils roar, summon eldritch horrors under tablecloths and make dead bodies rise. The game doesn’t care if you scare everyone away or if some escape by jumping to their deaths, you simply win when every living soul is gone from the premises.

There’s even a little side quest where triggering certain objects – say, an anchor to fall on a diver or a horn’s wail to send a boat captain flying overboard – unlocks a few new ghosts at your bell tower. Gather them all, and you’ll trigger a happy family reunion at the game’s end, when our little ghost can finally rest in peace. 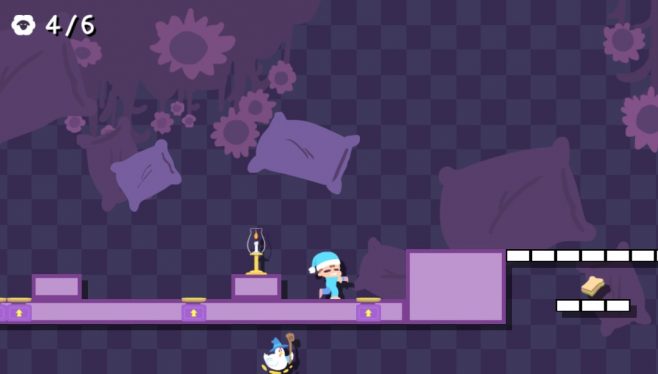 I love the little gems you find on Itch.io when you don’t expect it; Sleep Walker was an entry in the GameMaker’s Tool Jam 2018, which challenged developers to tackle a genre title by subtracting a mechanic of their choosing. In the case of Sleep Walker, all platforming is controlled by a second character who works behind (or rather, below) the scenes to direct a hapless sleepwalker as they shuffle along to their bed.

Following along and firing stars from below, you destroy blocks that obstruct his path or trigger launch pads to send him flying to the next platform, occasionally shooting a sandwich his way so he grows a la Super Mario. The platforming is tricky enough by itself, requiring a keen sense of timing in your shots to keep the sleepwalker continuing smoothly. If you’re not quick enough and he hits an obstacle, he does an about-face, often towards a platform’s edge with no way to redirect him.

But where things become delightfully complex is in managing his size along with his movement; too big, and low-hanging corridors will keep him from continuing forward, but too small, and his little legs can’t make certain jumps. Juggling these two elements becomes a frantic race by the game’s short end, and I’d personally love to see a longer version with the same mechanics.

Imprisoned in Paradise: The Leper Colony of Hawaii