When I was in elementary school, we didn’t have hall monitors; instead, every class was appointed a class monitor, who was in charge of keeping order in the absence of a teacher or an adult. Those brief, precious moments of liberation usually sent troublemakers drunk with ecstasy, and the classroom eventually descended into anarchy—with raucous chattering, handmade spitballs and paper airplanes clogging the air.

Burdened with the mantle of authority in these trying times, the class monitor took on the position with much sobriety. He would fly out from his seat, grab a marker and an oversized wooden ruler, and scribble down names on the whiteboard fervently. Then he’d holler, “Eh, quiet lah, later ‘cher come back!” (translation: Be quiet, or you’ll get into serious trouble when the teacher returns), while slamming the massive ruler against the board repeatedly. The chattering persisted, of course, and the cacophony of it all is enough to make anyone with functioning eardrums weep.

I was reminded of this class monitor when I played P.E. Noire, a point-and-click adventure game. I thought about how immaculately ironed his spiffy blue tie was—an emblem of recognition bequeathed to him by the teacher—and how he would tighten the knot ever so slightly, right before leaping into action. Things never got quite as chaotic in the game, but as a hall monitor named Rhubarb from Sunnyside Elementary School, you’ll also be embracing the role with equal zealousness. Yet, the child carries out her responsibilities with a world-weary disposition. Her harrowing life experiences, one of stems from discovering the sinister truth behind the food sludge from the school kitchen, has left her as a cold, bitter shell of her former self—a pastiche of the burned out noir protagonist. She no longer drinks water, but drowns herself in a sugary sweet drink from a juicebox called Drinky Drink. She vehemently despises the “system”, but has to work within its constraints. She has an unwavering vendetta against wrong-doers, vowing to take them down (to detention). Having been offered an intriguing case by the Principal, she soon found herself face to face with a hardened hoodlum—and a forgery case involving improper sick leaves. 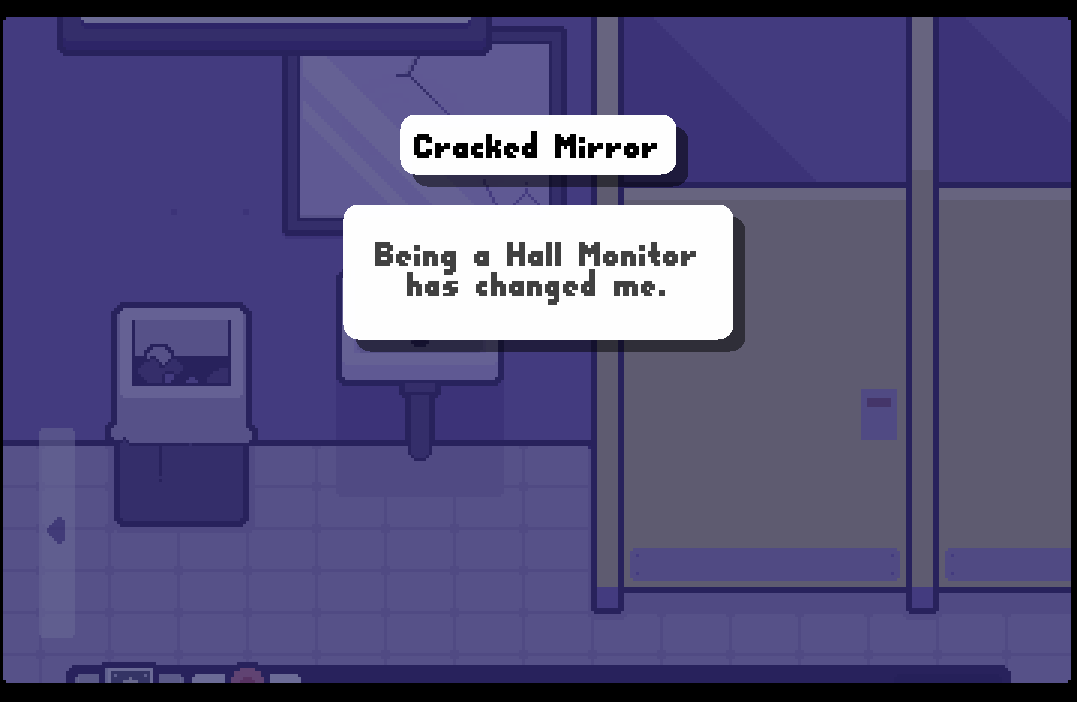 Built upon the spectre of noir clichés, P.E. Noire is ostensibly a spoof on film noir, but it’s much more than that; at heart, it is an adorable love letter to the genre. Conceived during a game jam themed around parodies, the title is a nod towards L.A. Noire, framing school ground woes with the moving gravity of hard-boiled detective novels. Even the excellent soundtrack is heavily reminiscent of the jazz standards in L.A. Noire, plucked right out of films in the 1940s.

“I wanted to work with something fun and lighthearted. I was actually watching a lot of Mindhunters on Netflix, so I wanted to do something detective-adjacent but still semi-family-friendly,” said Pico, the developer behind P.E. Noire. As Rhubarb the enterprising young sleuth, you’ll get to interrogate students and suspects, whose hilarious quips are also steeped in the lexicon of noir. Rhubarb’s self-musings about the state of affairs in this school carries a childlike charm; in one instance, she noted how her hall badge highlights her subservience to the Principal, an authority figure who’s perpetually half-draped in shadows. These moments of introspection are common in noir, and in P.E. Noire, they also signify her rich imagination—just like that of another child detective known as Tracer Bullet, the alter-ego of Calvin from Calvin and Hobbes. It’s through these instances that P.E. Noire wants to crack a smile on your face—a rare and earnest feat for a genre that’s so typically dour.

Luckily for the rest of us, Pico is planning to release at least two more episodes in the future, although it may take a while due to their busy schedule. “I definitely can’t let it end so short after I spent all that time coding the framework for the game!” they said. “I feel like there’s so much potential in converting dark, grim crimes in a child-friendly format.” Meanwhile, you can while your time away as a budding private eye in P.E. Noire, which is pay-what-you-want on itch.io.

The Vampire Panic of New England