This feature is a reprint from Unwinnable Monthly #103. If you like what you see, grab the magazine for less than ten dollars, or subscribe and get all future magazines for half price.

There’s nothing like a good strategy game, especially one set in space. Evidence is easy to find in just how many space-based strategy games are not only on the market, but also considered classics of the form: Homeworld, Dune, Alpha Centuri, Twilight Imperium and more – the list goes on. Even Civilization eventually went into outer space.

Mobile platforms are a great fit for digital ports of strategy board games and board game-like originals, but there aren’t many that attempt to deliver PC strategy game-style visuals to complement their 4X. Enter Rogue Universe.

Rogue Universe is a science fiction space adventure with a strong flavor of diplomacy. Set in a vast universe ruled by a few strong factions, players align themselves with patrons, fight off invasion attempts by rivals and generally try to save the universe. The game plays out with ample suspense.

Each action a player takes – be it one in service of the entire galaxy or one that serves their individual goals – results in increased conflict among other players, creating a ripple effect is felt throughout the universe. Exerting influence on one planet may cause discord within a guild and broken promise for miniscule gains can lead to an all-out war.

Rogue Universe is under development by Must Games, a small company born in 2017 with staff from Korean developers like NC Soft and Netmarble. We chatted with the staff about the game and their hopes for taking mobile strategy in a new direction. 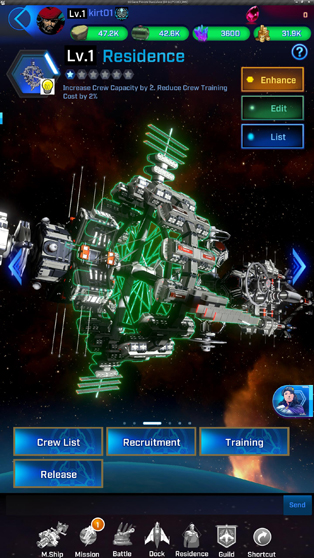 What inspired Rogue Universe? I see a little bit of Twilight Imperium in the approach to the art, but what strategy games influenced you?

We decided the best way to weave together all the threads would be in a mobile strategy game. Our game is easy to jump into and allows players to battle other players as well as form diplomatic alliances.

Speaking of the art – there’s a lot of whimsy on display (sentient bears!) and a lot of variety. What’s the thinking behind that?

Making a game with future or the space as a backdrop means lots of imaginary worlds, but we didn’t want to make them unrecognizable. We got our inspiration from the science fiction books, movies and games, and wanted to make the space familiar to as many users as possible. Carlo, the bear who makes frequent appearance in the game, is inspired by classic mafia movies – his name and costume were meant to be reminiscent of gansters. Meanwhile, Vol is inspired by the daemons from The Golden Compass. The designer who came up with Carlo is actually big fan of Iorek Byrnison from His Dark Materials.

There seems to be a strong element of customization at play. Can you discuss your design principals for customization?

Vanity is a strong motivation for many gamers. We put a lot of effort into trying to make each player to feel they are superior to other players in the game.

Players are also free to change the appearance of the mothership via selecting different module skin. These skins are easily acquired within the game, but also represents achievements, so there are also rare skins that are hard to acquire.?Color for the ships, as well as the guild emblem are implemented in this way. Eye-catching and strong colors are reserved for top-level players who command respect. 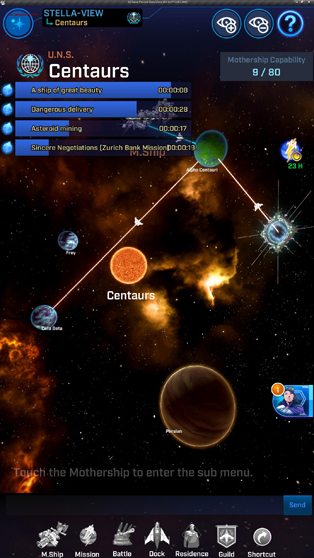 How much of a role does diplomacy play in the game? How is the diplomacy system designed?

The diplomacy system was part of the earliest game design. Rather than the actual diplomacy, it focused more on creating tension among users.

Let’s say I was able to rule a big planet. In order to rule a big planet, you need to have an alliance of several powerful guilds. The head of this alliance might need to promise some benefits to other guilds. Yes, the benefits could be distributed equally among other members, but the game allows the head to decide how the benefits are distributed among members. In such cases, the guilds who have better relationships with the head benefit more. The head might just leave out the guilds they do not like. Such a scenario creates tension among players.

This is the basis of the game play. Player wanders around the universe competing against other players with limited resources. Cooperation may lead to benefits, but betrayal may get you even bigger returns in short term.

Our development team already had experienced developing with Unreal 4 Engine and we felt the engine allowed us to develop efficiently, even with a small team. We were also able to get support and troubleshooting help through developer network, which was very helpful.

We are currently working in a shared office. The chairs here get uncomfortable after a long day of developing. Thus, the first major investment we plan to make with the dev grant award is good and comfortable chairs! We are an indie developer with limited resources, so such reward would be a tremendous boost from a morale standpoint. We are the only mobile game developer recipient in the second half of 2017, so we also hope that gets us more attention from investors.

Rogue Universe is scheduled to launch in late August in Korea and other select markets, which a North American release to follow in spring of 2019. For more info on the game, check out the developer’s Facebook page.