One of the most obvious things about Street Fighter is that it’s badly named. Or maybe ironically named. After all, European cage fighters, Russian wrestlers and mutants bred for war aren’t regulars on the post-pub punch-up scene. Luckily, verisimilitude isn’t a prerequisite for videogames (and who would play something called Medley of Combat Styles Fighter?) so we can forgive, or ignore, Capcom’s little oversight.

Nostalgia isn’t what it used to be: so goes an old song or a bad joke, depending on whom you ask. These days it’s literally true: you can easily plug your nostalgia into Google or YouTube and sate your longing with vivid representation. Super Soakers! Count Duckula!

Such excitement can only be the pleasure of recognition – not the fulfilment of remembered passion. In fact, it’s almost always disappointing: you see how the industrial, crafted, complex beams and arches of Mouse Trap were just always cheap bits of plastic; how shoddily put-together Rupert the Bear was as a show. Better to leave these things refracted by memory, untouched by the all-knowing present.

Lucky for me, I can still search for Street Fighter and conjure up its childhood meanings, since from the beginning, it was bound-up with competition itself. I had a Mega Drive, and my cousin, who lived next door, had a SNES. My parents carefully selected titles they thought OK, my cousin bought whatever he wanted. I had Sonic, he had Mario. I had Mickey and Donald’s World of Illusion, he had Donkey Kong. I had Mighty Morphin Power Rangers, he had Street Fighter 2: The World Warrior. I was always losing this competition, and I was always jealous, always. 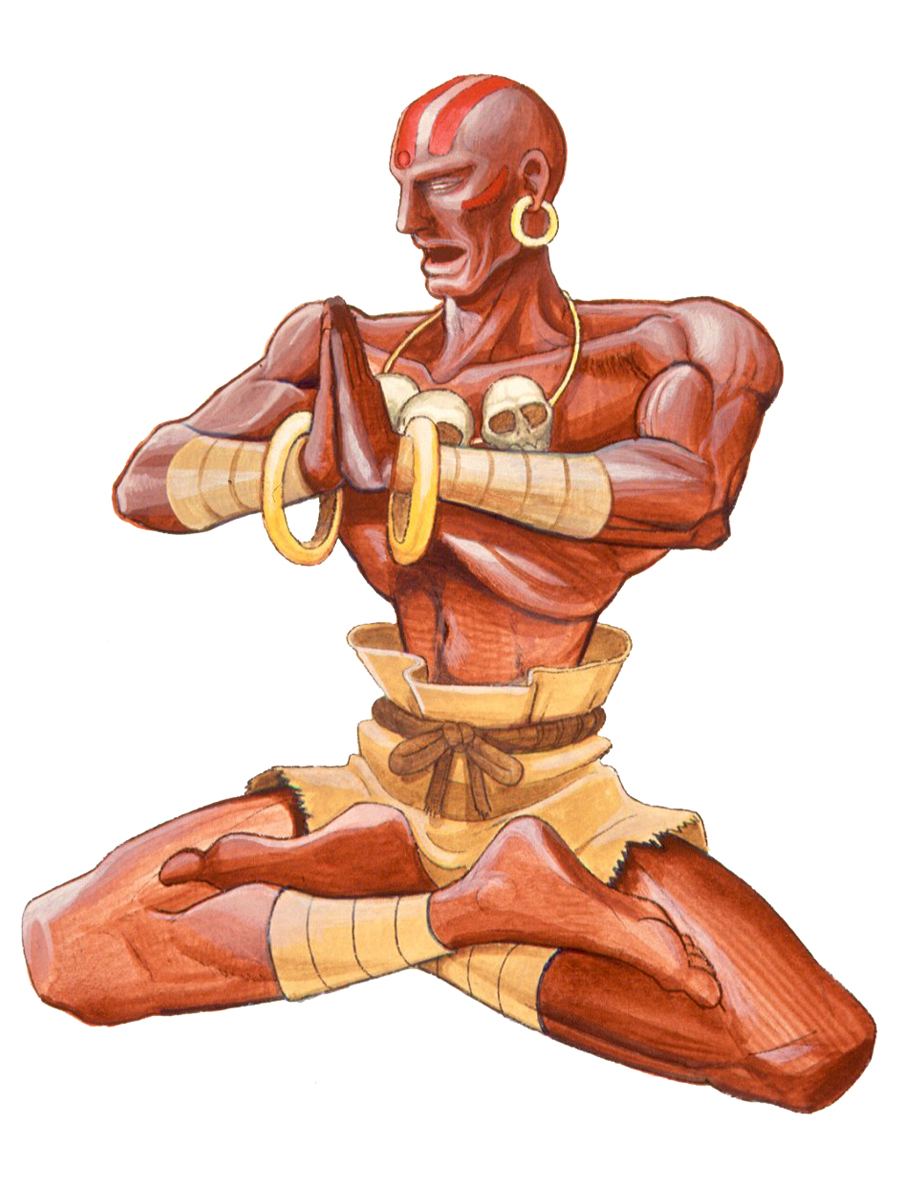 It was a cool game to have. But also, and this was infinitely more important, it was a game rich in detail. From an early age – seven? Eight? – I was impressed by how much care was given to creating the Street Fighter world. From Sagat’s reclining Buddha, to the elaborate Japanese set of E.Honda’s level, to – and this was a standout detail for a British Asian child – a Ganesh painting. Nothing quite so intricate and sensitive in Mighty Morphin Power Rangers.

The painting was the background for Dhalsim’s stage. There were also screeching elephants. And the man himself. I never wanted to play as him. He was a bit freaky, with his semi-emaciated body, his ultra-flexible limbs. He seemed to be a joke character; after all, I used to think, how could anyone that thin beat Zangief, or Blanka, or the formidable M. Bison? (Now, how disappointing it is to learn that that M stands for Mike). Yes, it was cool to have an Indian character in a game – even with the Orientalist touches now all too visible – I never drew strength or whatever from having him as a playable character. He was a holy man, a mystic, a yogi and such people were weird to me, to be left alone.

His story began in Street Fighter 2: The World Warrior – the first game for basically all Street Fighter fans. He, according to Wikipedia, was a pacifist who renounced his beliefs to fight in the tournament. I don’t think I understood this as a child. I also don’t think I cared: but now, it seems rather intriguing to probe this question a little. Sure, videogames do not need verisimilitude, but it might be interesting to ask, just who is Dhalsim, and what does he believe?

He is a yoga practitioner, a mystic, and he appears to be some kind of Sadhu with the red markings on his head and the skulls he wears around his neck (later, he would adopt a turban). Sadhus are ascetics and tend to believe in some form of Hinduism or Jainism. They are generally yogis and we can surmise from Dhalsim’s skull necklace that he probably belongs to the Aghori sect of Sadhus. This sect tries to make apparent the single phenomenon that is life and death by sometimes smearing ashes on their bodies and taking part in practices that remind them of death. 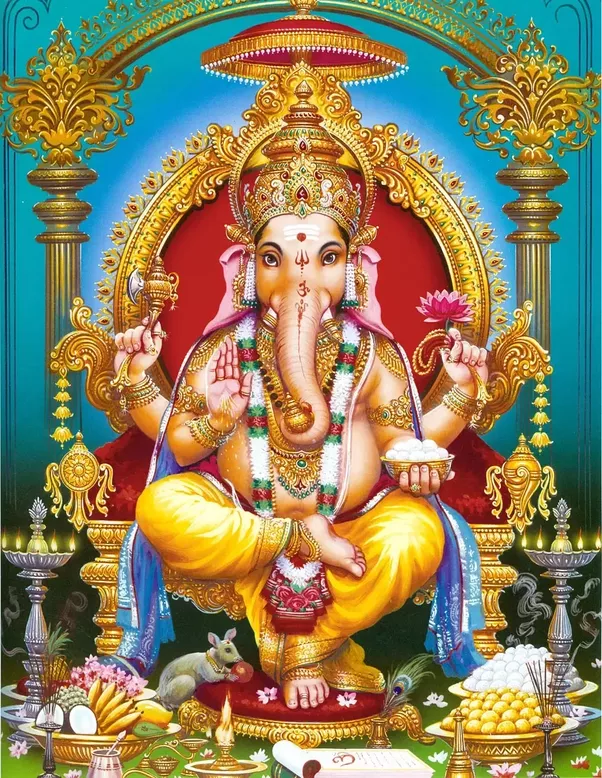 However, in the background of his level is a painting of Ganesh – not Shiva, who would be the more likely deity to be worshiped by a Sadhu and Aghori. Ganesh is Shiva’s son, but is generally revered for completely different things. Shiva is seen to embody or represent a kind of life force, specifically a kind of primordial, masculine one; Ganesh is revered for the prosperity he could bring his followers. Seen this way, Shiva would fit more with Dhalsim’s chosen way of life as a hermit; Ganesh would be a signal that Dhalsim intends to live within society’s restrictions. The latter interpretation could be correct – Dhalsim has renounced his beliefs to participate in the tournament. Ganesh, as the remover of obstacles, could help him win. So perhaps we are witnessing a dynamic shift in a person’s beliefs, from Shiva to Ganesh.

What about his unique way of moving, his bends and extensions? Maybe a specific yoga practice he does that could enlighten us about this singular individual. I spoke with yoga teacher Victoria Larsson about this. She told me the most striking thing about Dhalsim is she has come across no yoga practice that involves combat. There are things, Victoria told me, like Budokon yoga which blend martial arts with yoga, but none that specifically involve violence.

It seems Dhalsim is versed in the Yoga Sutras, ancient Indian texts that explore the mysteries of yoga. These mysteries include opening up new possibilities that are latent within humans, such as levitation. I asked Victoria if Dhalsim’s body looked like he practiced Yoga – she said yes indeed, in the old games he seemed to look very yogic, with long, lean muscles and his inexpressible flexibility. But in recent games, he looks more like a body-builder than a yogi. That being said, he doesn’t seem to do an awful lot of yoga – mainly Lotus pose, said Victoria.

It may be possible to combine some of Dhalsim’s beliefs and yoga practices within existing forms of Hinduism and yoga, but then again, no known forms involve the hyper-flexible punch. Dhalsim is, of course, a cartoon – something made up to resemble reality while pulling at its edges. Nevertheless, he remains unique and memorable, as he is the only character in the game whose combat style and character derives from his beliefs and backstory; not the other way around. We have Sumo wrestlers and Army guys, Muay Thai kickboxers and martial artists – any of whom could have been replaced by an equally talented practitioner. Not Dhalsim, though; he is a sui generis creation, who fights the way he lives. He doesn’t need to learn a specific type of punch or hold; he doesn’t need to don boxing gloves or shout haduken. He fights uniquely, naturally expressing his violence as an extension of his beliefs. This is what makes him fascinating, and no one could replace him, in the tournament, or in memory.